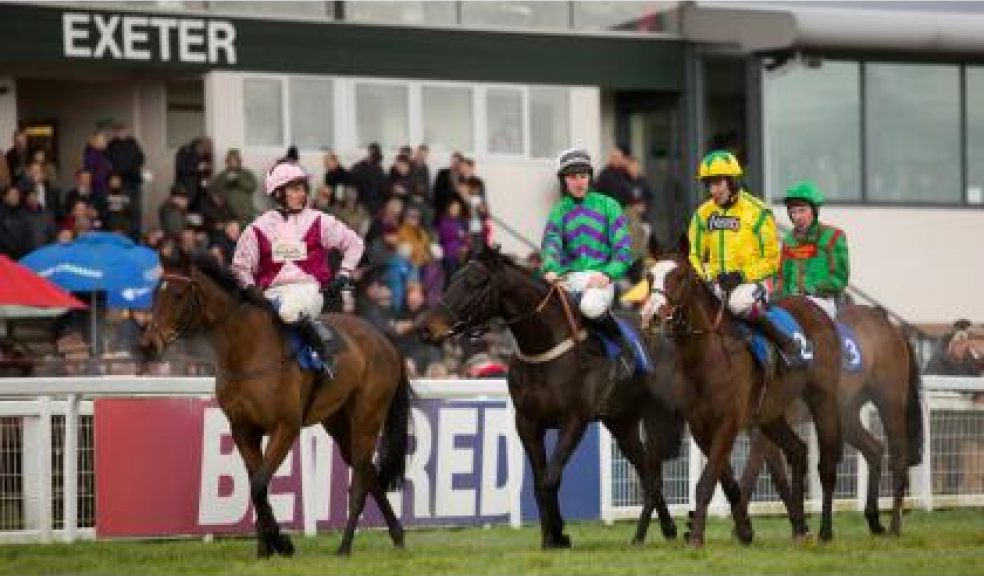 New Year’s Day racing on Haldon Hill is a much loved Devon tradition and hundreds of people will gather at the racecourse to enjoy the excitement and camaraderie of a day at the races.

General manager Dan Thompson said: “The atmosphere at Exeter on New Year’s Day is always fantastic with people wanting to celebrate the first day of the New Year in the fresh air against the backdrop of some thrilling racing. Nothing beats the experience of a day at the races.”

The first race gets under way at 12.35pm with the Passage House Inn Topsham Novices’ Handicap Hurdle. Bathwick Tyres, which have the largest range of tyres, alloy wheels, batteries and exhausts in the South-West, sponsor three races on the card – the maiden hurdle, a three mile handicap chase and a two miles three furlongs beginners’ chase. The  Thurlestone Hotel sponsors the two miles two furlongs handicap hurdle and the Royal Castle Hotel the National Hunt Novices’ Hurdle race.

Exeter is renowned for the quality of its runners and this season already, several horses with superstar stamped all over them have run at Exeter. They include the JP McManus-owned Yanworth, a hugely exciting prospect who began his hurdles career at Exeter with a win in November and has since won twice more. He is widely regarded as a future Cheltenham Festival winner.

It is not uncommon for potentially great horses to start their careers at Exeter, before gaining a real name for themselves and two of the most famous horses in racing history, Desert Orchid and Best Mate, won their first steeplechases at Exeter in 1985 and 2000 respectively. New Year’s Day could prove another ocassion when another potentially great racehorse could be seen in action at the Devon track. It’s a day not to be missed by sports fans.

Dream Alliance, who featured in a film Dark Horse, about his life which began on the coals tip in Wales, is the guest retired racehorse in the www.southwestshelters.com Stable.

Premier tickets cost £22  and Grandstand and Paddock tickets are £17 each with discounts if purchased in advance. Children aged 17 and under race free. A courtesy bus leaves Exeter St Davids at 10.55am and the Bus and Coach Station at 11.10am returning half an hours after the last race.