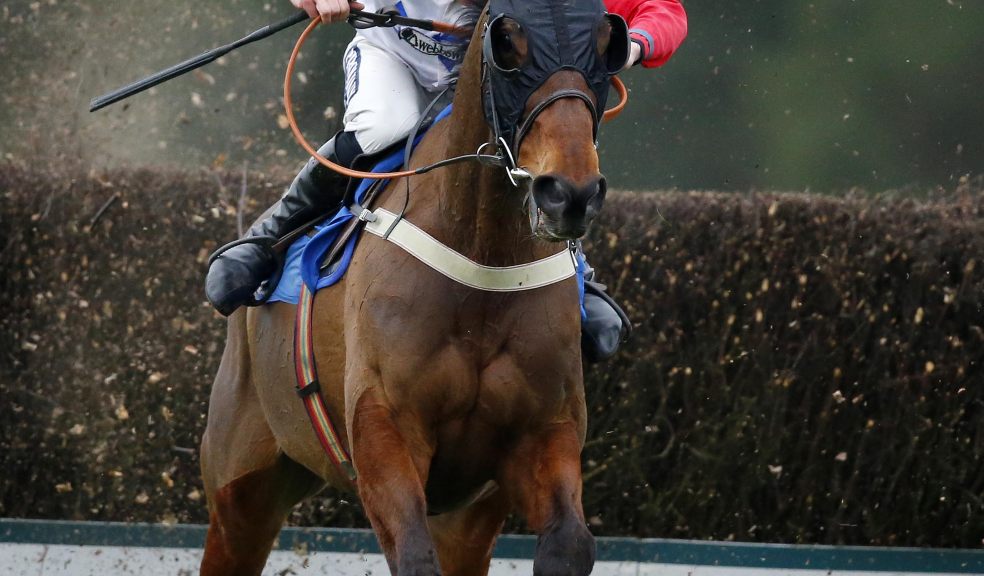 Fourofakind galloped home the 17 lengths winner of the Higos Insurance Services Devon National at Exeter on Sunday (28 February) in an incident packed race where just two of the 12 runners finished.

Trained by Harry Whittington in Oxfordshire, he was sent off the 9-2 joint favourite along with Wizard’s Bridge who pulled up four fences from home.

Gavin Sheehan gave him a superb ride, holding him in midfield until turning into the home straight when he took up the running from Saroque and guided him to a comfortable win. Part owner Andrew Sawyer said: “The main target was the Welsh National and he just got in to the race but it didn’t go to plan and he pulled up. He needs at least four weeks between his runs and he needs a big galloping track and a distance. He also needs soft ground so the race worked out very well.”

It was the second half of a double for Sheehan who had earlier scored on the Warren Greatrex-trained Hannah’s Princess in the mare’s handicap hurdle.

Harry Skelton was another jockey in double form when scoring in the opening mares’ novices’ hurdle and the National Hunt Novice’s Hurdle, both for his brother Dan.

In the novices’ hurdle Lapalala and Girly Girl jumped the final flight locked together and looked set to continue their duel to the line. But Lapalala didn’t get her landing gear out and took a tumble leaving Girly Girl to finish alone.

Owner Tim Crowe said: “We wanted to find a race for him, and this has worked out well. We’ll see how he comes out of the race and maybe give him a couple more runs. His real career will be as a chaser as he’s won a point-to-point in Ireland.”

Odds-on favourite Captain Chaos had a far tougher job and it was a three-way photo on the line with the highly regarded five-year-old getting the nod from the Victor Dartnall-trained Bindon Mill.

Assistant trainer Josh Guerriero said: “We think a lot of him and he’d be one of the best novices in the yard. The ground didn’t suit him at Cheltenham on New Year’s Day when it was heavy as he needs soft ground. He’s quite a big, raw horse and he’ll be better next year.”

Neil King saddled Milansbar to win the Andrew West Memorial Memorial Novices’ Handicap Chase. The nine-year-old under Trevor Whelan kept up a relentless gallop down the long in with the last fence omitted due to being damaged in the Devon National.

Bob Buckler’s home bred Say My Name was another to show a resolute aptitude for galloping in soft ground  taking up the lead at the second flight in the ROA/Racing Post Owners Jackpot Handicap Hurdle  and winning by 15 lengths with Liam Heard in the saddle.

Buckler raced the dam River Reine and has other youngsters waiting in the wings. The concluding race went to the Evan Williams-trained On The Road ridden by Paul Maloney.

Exeter Races again on Tuesday, March 8 with the first of six races underway at 2pm. Grab a racecard, and make new friends around the paddock as you discuss the day’s runners. Don’t miss out on the excitement of a day at the races, and don’t forget, there’s a free racecourse tour an hour before the first race – meet outside the weighing room. The first race is off at 2.00pm. Tickets cost from £13 if booked in advance, with pre-booked Grandstand and Paddock tickets available from just £10 each for groups of ten or more.

A free bus to the racecourse leaves Exeter St Davids at 12.20pm and Exeter Bus and Coach Station at 12.35pm and returns 30 minutes after the last race.