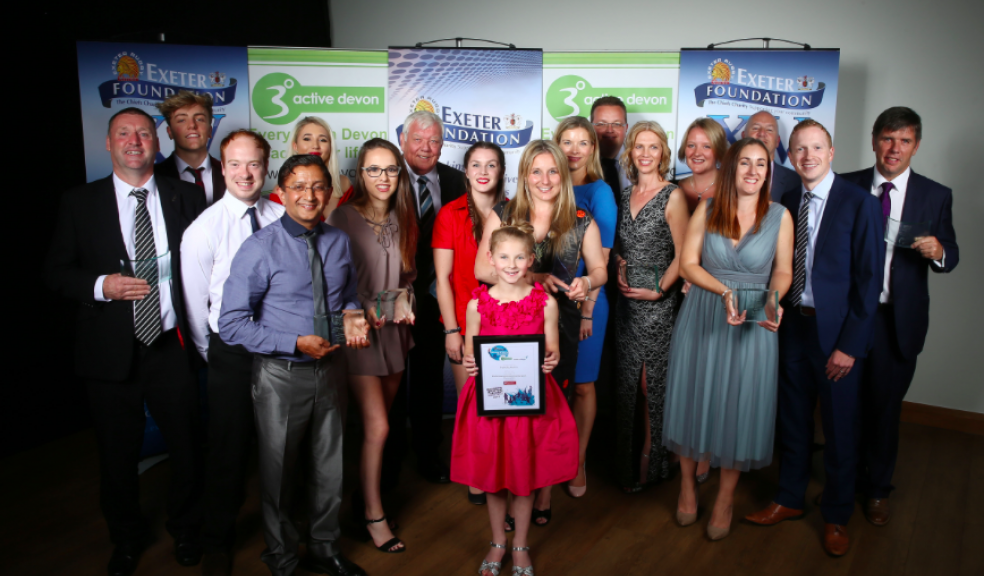 The glittering celebration evening  was the culmination of a six month nomination and shortlisting process. The Devon Sports Awards recognise and celebrate the best of both community and professional sport in Devon. Guests assembled at Sandy Park for the annual celebration organised by a partnership of the Exeter Foundation, Active Devon and Exeter College.

There were a very high number of nominations this year with coaches, clubs and sportspeople in the running from over 45 different sports as varied as underwater hockey and beach volleyball to more traditional sports like hockey, football and swimming.
The independent judging panel had the unenviable task of whittling down all the nominations to the final 30 who were drawn from a wide range of local sporting organisations.

Many young sporting stars were recognised for their individual achievements in the Performances in Community Sports category. Alyssa Oates from Plymouth Underwater Hockey Club, Elyse Leech from Torbay Athletics Club and Felicity Ayres from Falcons Gymnastics Academy in Barnstaple were the first to receive recognition for their outstanding achievements within their own sports. The assembled guests were then treated to videos summarising the achievements of a second group, consisting of Kendal Brown from Torquay Tennis Club, Molly Canham from Exeter Harriers and Tate Budge Trenic/Yiewsley Taekwon-do Academy.

The Devon Young Coach of the Year was awarded to Matthew Rhymer from the Academy of Beach Sports in Croyde whilst the Devon Coach of the Year was awarded to Helen Reddy from Honiton Gymnastics Club and Ivybridge College. Three exceptional clubs were in the running for Devon Club of the Year, Axe Vale Netball Club, Fremington Youth Football Club and Academy of Beach Sports with the judges finally awarding the winners trophy to Fremington Youth FC.

The winner of Contribution to Inclusive Sport was Bobby Singh of ROC Active and Torbay Ability Club whose impressive record of getting people with impairments and disabilities into a wide range of different physical activities impressed the judging panel. Devon Young Volunteer of the Year was awarded to Amber Francis who has been coaching and making a real difference to her young swimming stars at Tavistock Swimming Club. Jeremy Rice was the deserving winner of the Devon Volunteer of the Year for many years of dedicated, varied service to Honiton Rugby Club.

The final two categories were brand new for the Devon Sports Awards and reflected the growing role that workplaces play in getting staff and the community fit and active. Business Contribution to Sport in the Community was won by The Exeter, for the huge range of support that they offer to clubs, individuals and events in and around Exeter. The winner of Business Contribution to Sporting Activity in the Workplace was Department for Work and Pensions in Plymouth who have provided all sorts of innovative ways for employees, who are office based and therefore sit for long periods of time, to move more, participate in beginner schemes and get active before, during and after the working day.

The final and most prestigious award of the evening was Outstanding Contribution to Sport in Devon. The recipient of this award is chosen from amongst all the category winners and celebrates a special person who has genuinely stood out from the crowd by going above and beyond normal expectations. The trophy was awarded to Helen Reddy who has inspired, coached and mentored hundreds of gymnasts in her school and in after-school and community clubs. Ivybridge Community College Gymnastics Team  one of the many teams that she coaches become the most successful school gymnastics team in the Country.

The full list of winners on the night were:

Business Contribution to Sport in the Community
The Exeter