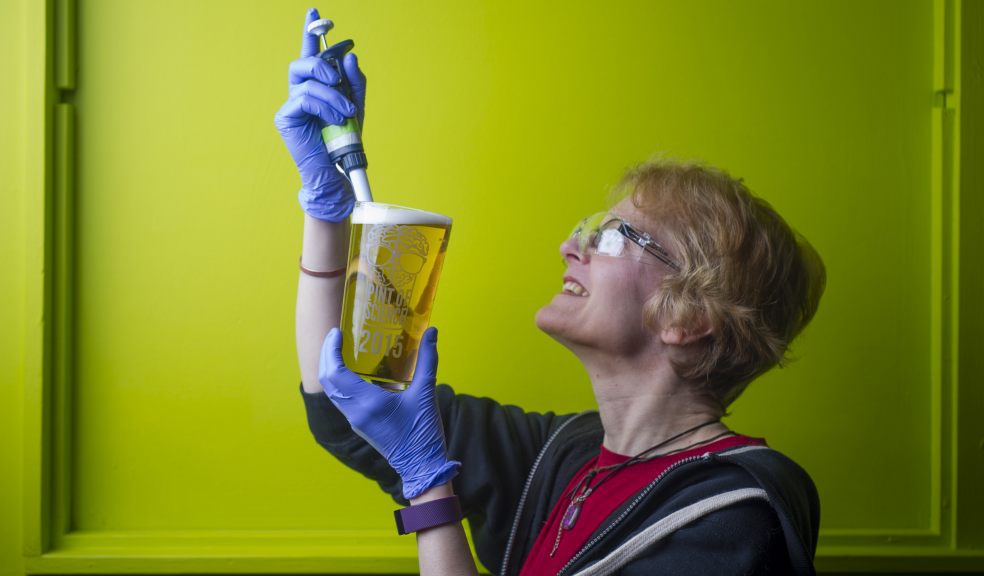 Experts from the University of Exeter and the Met Office will bring their research out of the laboratory and into city watering holes, as the world's largest festival of public science talks arrives in Exeter. next week

Pub goers will hear talks on everything from how science can future-proof seafood production to online social identity detection when 30 local researchers take to the stage as Exeter joins more than 100 cities around the world who will be taking part in a global festival from the 15th-17th May.

Tickets are now on sale at www.pintofscience.co.uk/events/exeter.

The international, three day Pint of Science festival will see thousands of scientists simultaneously standing up and talking about their research in 100 cities across 12 countries around the world. Founded five years ago by two UK researchers, the festival brings a unique line up of talks, demonstrations and live experiments to the nation’s favourite locals.

University of Exeter researchers will be speaking at various venues across the city, including The Globe Inn and The New Inn. Tickets are available from the Pint of Science website (pintofscience.co.uk), with each evening costing only £4. For this Exeter attendees will enjoy a variety of exciting talks including:

Dr Craig Beall’s talk on “Why our brains love sugar: in health and disease” discussing how the brain is an energy hungry organ, burning about 20 per cent of the energy we consume, despite only accounting for about 2 per cent of our weight. Given that the fuel supply to the brain is so important to enable it to work properly, the brain has developed complex ways to sense changes in energy levels. We are increasing the understanding of how different brain cells sense changing energy levels and how this might go wrong in diseases such as diabetes, where energy levels change rapidly, even on an hour to hour basis.

Dr Jenny Hatchell will discuss “Why the Milky Way is like your local pub”. She will compare a beer glass to the Galaxy and demonstrate that what is going on up there is not so different from what goes on down here.

Clare Bryden will address the art of flood risk discussing how the view from above has become normalised. Google Maps and OS Maps, city centre plans and ‘you are here’ stickers on the boards at local nature reserves, give the impression of omniscience and omnipotence. The very notion of ‘flood risk’ calls both our knowledge and power into question in the face of uncertainty and the force of nature.

Alongside the main talks, each evening will also include a range of fun, science related activities including quizzes, geeky puzzles, engaging stories and other interactive activities.

Dr Luke Pilling, co-organiser of the Exeter event, said: “I’m very excited to be helping bring Pint of Science to Exeter for the third year running. With the addition of the Planet Earth events this year, I really think we have something to interest everyone. I hope people will join us at some of our favourite locals to enjoy some fascinating science talks and a drink or two.”

Pint of Science was established five years ago by a group of UK-based postgraduate and postdoctoral researchers. Festival founders Dr Praveen Paul and Dr Michael Motskin wanted to bring back the personal touch to science, giving everyone the chance to meet the real people behind the incredible research taking place in universities across the country. The duo are amazed by the growth of their idea into a global festival, which has spread to 12 countries around the world.

“Science can often get lost in translation, leading to the spread of pseudo-science and myths. The best way to overcome this is for people to be able to talk to scientists directly in a familiar environment, such as in a pub over a pint”, says Festival co-founder Dr Motskin.

“We are in awe of how big the festival has become over the years, demonstrating the thirst there is to hear science from the source – the scientists. The festival gives everyone the chance to pick the brains of some of the UK’s most brilliant academics, breaking down barriers and giving unrivalled access to the people behind the science.”