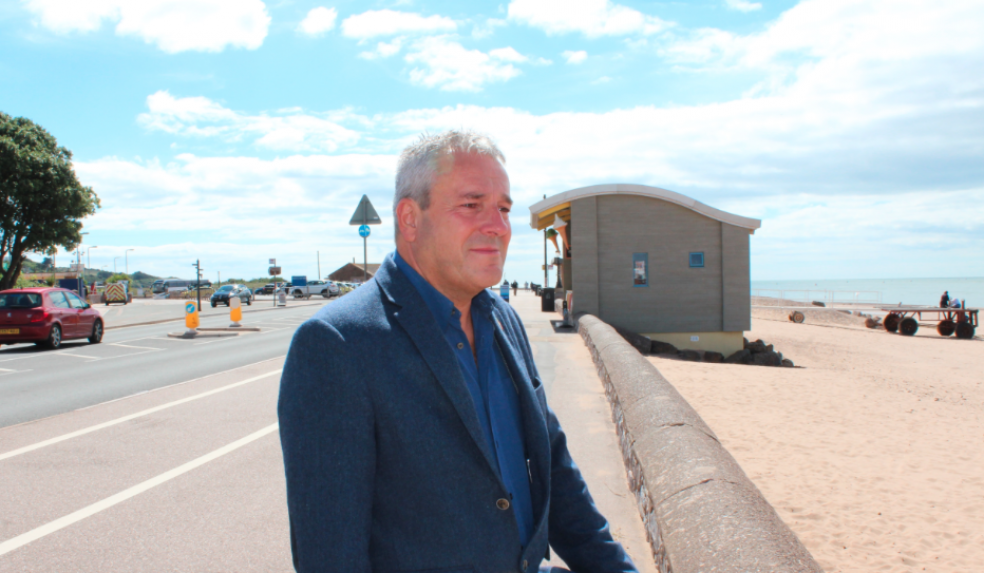 As the UK summer holiday season looms, bringing the usual influx of tourists lazing on Exmouth’s beaches, work is intensifying to encourage more visitors to come to the town all year round.

East Devon Conservatives want to provide a platform for local traders and entrepreneurs to develop and grow businesses that provide the goods and services expected from a vibrant 21st century holiday destination, as well as boosting employment in the town.

And that, says the new man heading up Exmouth Regeneration Programme Board, means ditching the mind-set that shuns new ideas and clings to the image of a 1950s English seaside resort.

That’s why Philip Skinner and other policy-makers at East Devon District Council (EDDC) are pressing ahead with further consultation, even as work continues to deliver elements of the Exmouth Vision such as the new, improved Mamhead Slipway, a Water-sports Centre and revitalising Queen’s Drive.

Exmouth’s Coastal Communities Team (CCT), also chaired by Philip Skinner, wants to see the town enjoy the maximum benefit from its unique position close to an area of outstanding natural beauty, with a seaboard offering a host of leisure activities and sports, not to mention the boast of being the western gateway to the Jurassic Coast World Heritage Site. This is all reflected in the town’s new Economic Plan *.

Philip Skinner says East Devon Conservatives want to see all-weather facilities that not only play to Exmouth’s strengths as a place popular with the bucket and spade brigade, or with water-sports enthusiasts and bird-watchers, but also catering for visitors when summer showers fall or during the cooler, wetter months of winter.

Grenadier Estates, the developer behind the water-sports centre, have appointed a project manager and are understood to be hoping to bring forward a plan for public comment by December.

All 29 Councillors representing Exmouth on all councils have met to inspect various plans and make comments.

A café and other boarded up buildings on the landward side of Queen’s Drive will be demolished. The fun park with the paddleboats and the area to the rear will continue to be leased to the tenant until the end of 2017 season.

Exmouth members have asked EDDC to consider putting redevelopment of the Harbour View Café in a later phase of the scheme and negotiations with the tenant will begin next week.

Meanwhile, EDDC are hopeful that the realigned road and car park will be created out of season to be ready by the summer of 2017. The car park will offer more spaces than the existing one.

The minutes of the latest regeneration board meeting will be on the agenda of EDDC Cabinet on 13 July 2016.

Philip Skinner, who is also Chairman of the CCT, said: “Over the coming weeks, an independent survey will be carried out for the Exmouth Coastal Communities Team. This is to gather key information on the visitor economy".

“A sample of 1,000 people visiting Exmouth will be interviewed face to face between now and October, to find out what they like about Exmouth and what extra things we can provide to make it more likely they will return – not only next summer but at other times of the year".

“There will also be a survey of leisure and tourism businesses, together with economic modelling of the volume and value of tourism to the town. This work will be carried out by the South West Research Company Limited”.

Data from the survey will complement other research carried out before, during and since the formulation of the Exmouth Masterplan, a document that sets out the vision for Exmouth’s future as a holiday resort that caters for modern tastes whilst staying faithful to its environmental assets.

Philip Skinner, EDDC’s Cabinet Member for Economy and recently elected to take over chairmanship of Exmouth Regeneration Programme Board, is passionate about successfully achieving the balance between maximising commercial benefits and preserving natural charm.

He said: “I was born in Exmouth. I grew up at Maer Farm and I went to school here. I have a great affection for the town and I want part of my legacy as a district councillor to be getting Exmouth up where it belongs as a modern holiday destination with appeal to many different groups and a place where you can relax and have fun at any time of year".

“I know there are some who oppose what we are doing and want to keep Exmouth stuck in the past. If they had their way we would still have the Elizabeth Hall, a little-used meeting place, instead of the vibrant Premier Inn – one of the most successful hotels that this brand has in the UK".

“This, plus the newly revitalised Ocean entertainment complex, are examples of what we are looking to achieve across the seafront and retail heart of Exmouth".

“I happen to also think that many, many people in Exmouth agree with what we are doing. These are people who travel abroad or throughout the UK and know how other resorts are improving their offering to retain visitors and attract new ones.

“Part of the CCT’s aim is to deliver the Economic Plan and to see Exmouth matching the performance of comparable seaside centres and approaching those of its urban neighbours.

“Exmouth’s Economic Plan is a working, dynamic document. Having established strong principles, project ideas and ways forward, we expect it to evolve as the local economy changes and as resources allow, driven by East Devon Conservatives for a better, brighter Exmouth”.

The Exmouth Economic Plan can be accessed online at: http://www.coastalcommunities.co.uk/wp-content/uploads/2016/05/Exmouth-e...