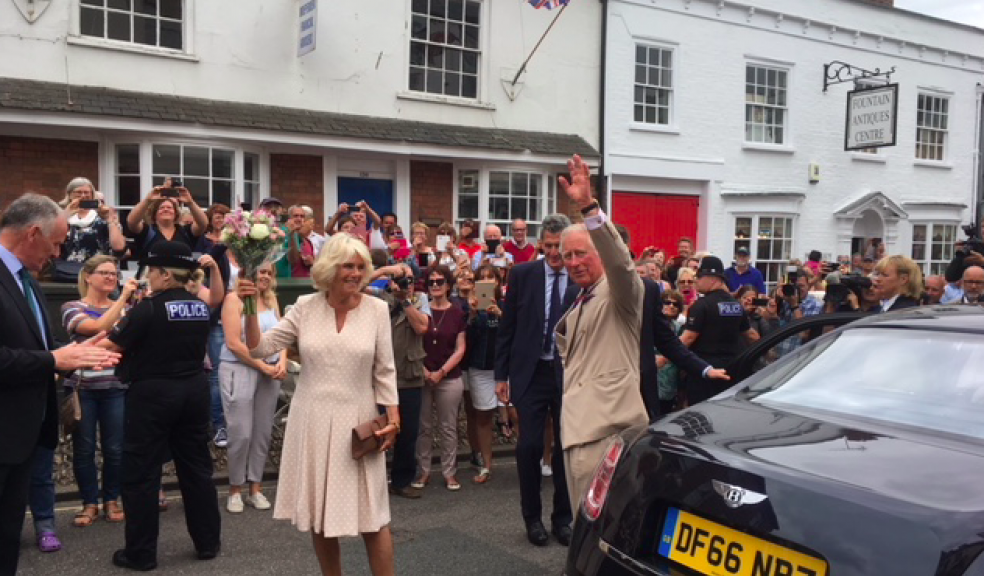 Honiton’s first ever Gate to Plate event, celebrating East Devon’s finest food and craft producers, was pronounced a resounding success today (Wednesday 18 July) not only by the 6,000 visitors who attended, but also by HRH The Prince of Wales and HRH The Duchess of Cornwall, who flew in specially to meet around 60 of the district’s most innovative and creative traders.

As well as meeting key local representatives, the Royal couple visited the stands, taking the time to speak to traders and sampling a wide variety of delicious and innovative wares on offer. Before departing home, an amazing birthday cake made by local baker Cathryn McCollum was presented to Prince Charles for his 70th birthday. A gift of locally produced gin and tonic was given to the Duchess who celebrated her birthday on Tuesday 17 July.

From traditional fare to the most creative – there was something for everyone to taste and buy at this market, which stallholders hope will become an annual event for the town. Entertainment on the day included Honiton Town Band, Honiton Youth Orchestra and the children’s choir from Honiton’s Littletown Primary Academy School. The event was organised by East Devon District Council’s Economic Development team, with support from Honiton Town Council and Taste of the West, the largest independent regional food group in the UK.

Cllr Ian Thomas, East Devon District Council’s Leader is delighted with the support that the event has received, saying: “The response we have received for Honiton’s Gate to Plate from the public, the traders and of course the Royal couple has been nothing short of fantastic and has served to underline the vision of what we hoped to achieve for the town of Honiton and the businesses of East Devon. Honiton is a very special town with a long and successful history of markets – as a West Country destination it has so much to offer and I think this event has helped put it firmly on the map. Our traders did us proud today by offering a fantastic range of quality produce for people to sample and the market really buzzed throughout the day. Finally, I would like to thank everyone who contributed to the organisation of Gate to Plate, their hard work has helped make the event a resounding success that we hope will be repeated on an annual basis.”

Chris and Sarah Jones of Bloomberry Juice from Clyst Hydon, said it had been a lovely event and very well organised. “Prince Charles stopped by and tried a sample of our Cloud Lime Juice and was very impressed. He was very interested in the ingredients we used.”

The Duchess of Cornwall tried out a beef dumpling from Rupert Moon of The Earl of Gravy Dumpling House, based in Exmouth. Rupert said: “I heard her murmur ‘delicious’ and that made my day! This has been a fantastic event and everyone has been so upbeat and we’ve sold out.”

HRH also tried out the Rhubarb and ginger ice cream from Otter Valley. Kellie Cornish who served her, said: “There’s been a great atmosphere here today and we’ve loved the variety of stallholders and so have the public. They haven’t stopped telling us all day how much they’ve enjoyed it.”

Dr Heather Gibbard of GreenBee Entomology said the Prince was fascinated by their stall, which sold baked treats made from edible insects. Dr Gibbard who runs her bug farm for darkling beetles, offered an insect cake to the Prince. “We’ve had a fantastic day here today and we’ve almost sold out with a few hours to go. It’s been a great way of promoting our business.”

Cllr Phil Twiss, ward member for Honiton, said: “This has been an historic day for Honiton with our Royal visitors and a fantastic event for locals and visitors to enjoy and I am really pleased for all those people who have been part of the large team that this has been such a success.”

“It has been a great honour for Honiton to host their Royal Highnesses at the Gate to Plate event. A huge amount of organisation went into making this such a success. We are sure that the various stall holders enjoyed a very positive experience in being able to showcase their wares to the all the visitors. We look forward to welcoming everybody back to Honiton in the future.”

John Sheaves, CEO Taste of the West, said: “We were very proud to be part of this event and to showcase the very best of what East Devon had to offer to their Royal Highnesses. HRH the Duchess of Cornwall visited at least 25 stalls, speaking to every trader and tasted a wide variety of food and drink, from steamed pudding to gin, but the star of the tastings appeared to be The Earl of Gravy’s dumpling, which she particularly asked to sample!”