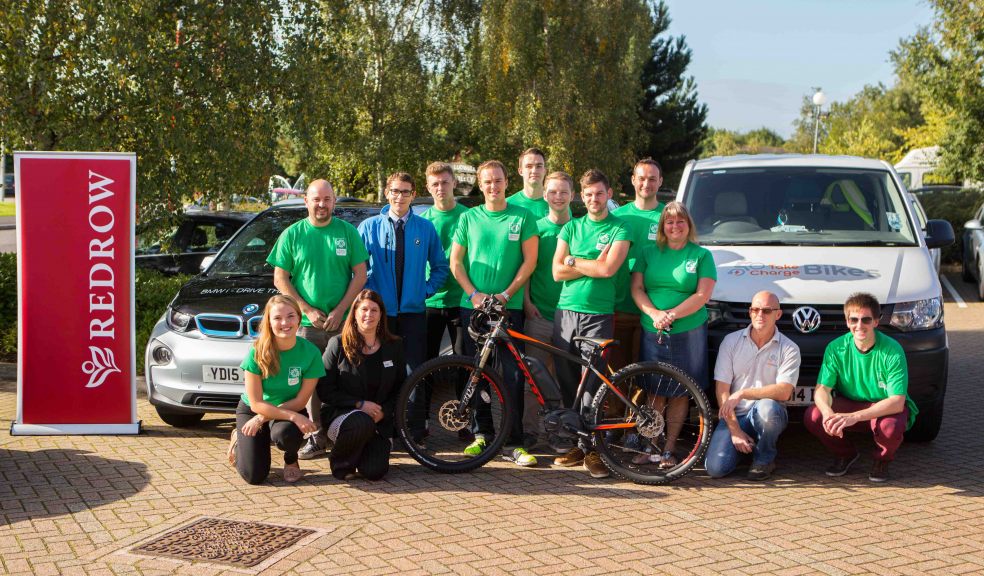 A 12 strong team of competitive-commuters met at Exeter central train station on Friday 25 September for our commuter ‘Top Gear style’ race to determine the fastest, greenest, cheapest, safest and easiest way to commute across the city to our office in Pynes Hill.

As the clock hit 8.45am, the busiest time for travel, the green chequered flag waved the competitors off in a bundle of chaos, consisting of runners, a cyclist, an electric bike, BMW i3 electric car, a taxi, walkers, a bus and a train to Newcourt, who completed the last leg by walking.

As this is was a green challenge, the winner wasn’t decided by coming first across the finish line. Each mode of transport was also scored on carbon emissions, cost, comfort, accessibility, image rating, safety and the time to complete the journey.

Back in the office, there was a crowded reception ready to welcome their racing heroes across the finish line with another green flag and plenty of cheering!

And the overall winner was… The Cyclist! Well done to Sean Papworth, Head of Customer Services, who not only cycled at an incredible pace, but had one of the lowest carbon outputs, little cost and a good image rating. It helped, of course, that Sean is a keen cyclist, and had the same equipment as Team Sky did for the Tour de France!

The next fastest mode was the electric bike, closely followed by the electric car, who completed the race in an amazing 14 and 17 minutes respectively, but were let down by accessibility and cost. However, with such speed, it proved what a great way of travelling across the city an electric bike can be, especially with its green credentials and pedal assistance.

In last place was the taxi, this was mainly due to its cost, CO2 rating and the fact that there weren’t any readily available taxis at that time of the morning, which caused this method of transport to take the longest.

It also proved an interesting test in to which commuting methods are actually available in Exeter. Whilst the race has helped determine the most effective travel methods, and show where improvements can be made, it has also helped trigger a lot of discussion about sustainable transport and how small personal changes could make a big difference to the city.

Reuben Cooke, Technical Manager, and Head of the Green team for the West Country office, commented: “The race has proved a great advert for cycling in Exeter, showing that it is actually the quickest way to get around the city, beating cars and taxis. And to discover that getting a bus from town is only eleven minutes faster than walking has been a real eye opener. The event has generated a lot of discussion about sustainable travel and hopefully posed a few questions, like how can public transport be improved, the price of electric bikes and would electric cars be suitable for the Redrow company car list?”

We look forward to organising our next green event within the region, promoting a greener lifestyle in work and at home and continuing to raise awareness on our impacts as a business.