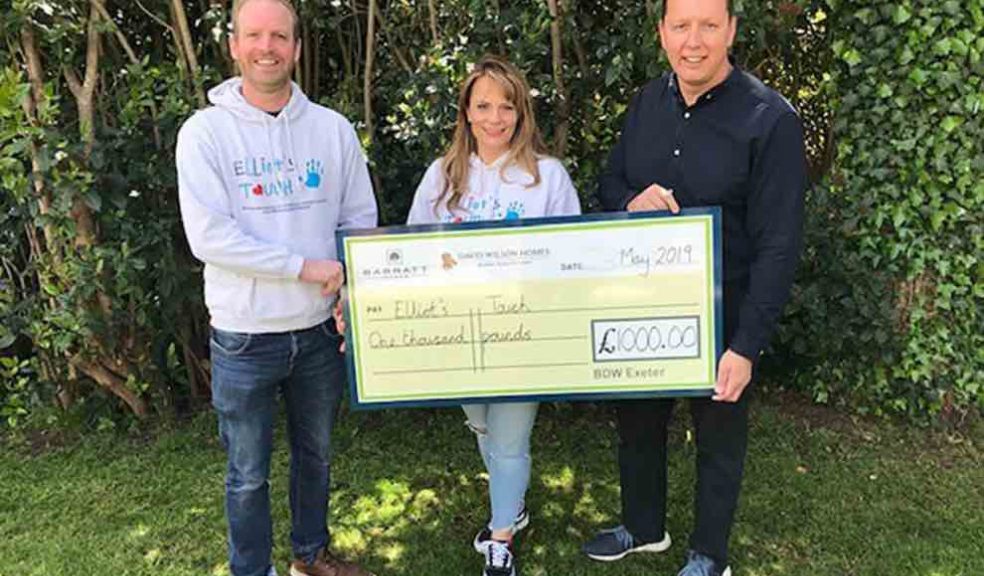 A charity set up in the memory of Somerset youngster Elliot Stevens has received a £1,000 windfall from Barratt Homes in Exeter after becoming the latest recipient of the housebuilder’s new community initiative.

The Barratt and David Wilson Homes Community Fund donates £1,000 each month to a charity or organisation and the fund is part of the company’s pledge to strengthen its ties with the areas in which it is building new homes.

Elliot’s Touch is one of the first recipients of the new fund and the charity has a special place in the heart of one Barratt Homes employee, Jason Gower, who nominated the charity.

“Elliot passed away in 2015 after being diagnosed with dilated cardiomyopathy and Mitochondrial Disease and the charity has been set up to help fund research into the disease,” said Jason.

Huw Llewelyn, managing director of Barratt Homes in Exeter, said: “Being able to support charities like this is one of the most rewarding parts of what we do. We were all touched by Elliot’s story and are so pleased to be able to support Elliot’s Touch through our new community fund.”

To find out more about Elliot’s Touch visit https://www.elliotstouch.org/

Barratt Homes and David Wilson Homes in Exeter also supports the Exeter Foundation and is inviting charities and organisations to apply for one of its monthly grants. Organisations can apply by emailing exetercharity@barratthomes.co.uk with details of your charity or organisation and how the donation would benefit the local community and improve lives.