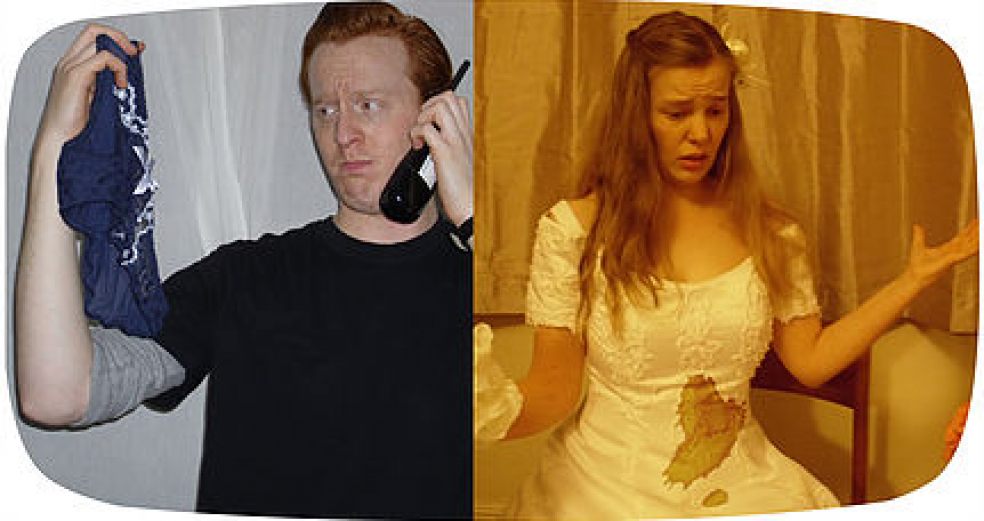 We are TICTAC Theatre (Two Is Company, Three’s A Crowd Theatre); a South-West based Company specialising in two-handers and multi-role plays, producing a mixture of classical and contemporary plays.

TICTAC Theatres first production ‘The Open Couple’ by Dario Fo premiered to a sell out show at the award winning Bike Shed Theatre.

It has since completed a small UK tour in the summer of 2015 receiving great reviews.

Following it’s success we are now touring our new production for this year. This next production is to be a double bill of two 30 minute shorts.

‘The Bride To Be’ by Peter Quilter – Angela is marrying for the third time to the dismay of her brother Toby, amidst a barrage of bad omens and a dress resembling a parachute.
‘You Were After Poetry’ by Steven Bloomer – A fast paced and witty relationship comedy showing one couples break-up and it’s after effects.

These two plays together, make for an hour long performance; brimming with cunning one- liners and heightened physical comedy all underlined with humorous relationship dramas.
Directed by Jacquie Crago (RSC, War Horse, One Man Two Guvnors).

For further information on our company and it's productions please visit www.tictactheatre.co.uk where you will also find information on other venues we will be attending on our tour, as we visit Broadclyst, Crediton, Launceston, Lyme-Regis and Tiverton during this Summer.

“Brilliantly performed by Tic Tac Theatre, the witty dialogue is perfectly timed and the physical comedy delivered with superb pace and energy. Tic Tac are a two-handed company founded by Hannah Brooks and Scott Goodair – and if you searched all year you couldn’t cast the performance better.” Remotegoat ****

“Brooks and Goodair attacked this demanding play with verve, meeting the needs of addressing the audience and returning to the flashback sequences seamlessly. Even with the changing narrative, the throwing themselves out of windows and the beating each other up required during the plot, they made it look effortless. It really was an absorbing performance and great to watch, a fantastic example of play and performers finding a perfect match.” Back Seat Mafia

“The acting within this performance was superb. A mixture of still images and exaggerated movements made for hilarious encounters that were bound to be troublesome for both characters. Unrelenting pace kept the audience engaged and on their toes as to what could possibly happen next! Overall the performance was executed with precision, comedic timing and chemistry between characters.” The Daily Fringe