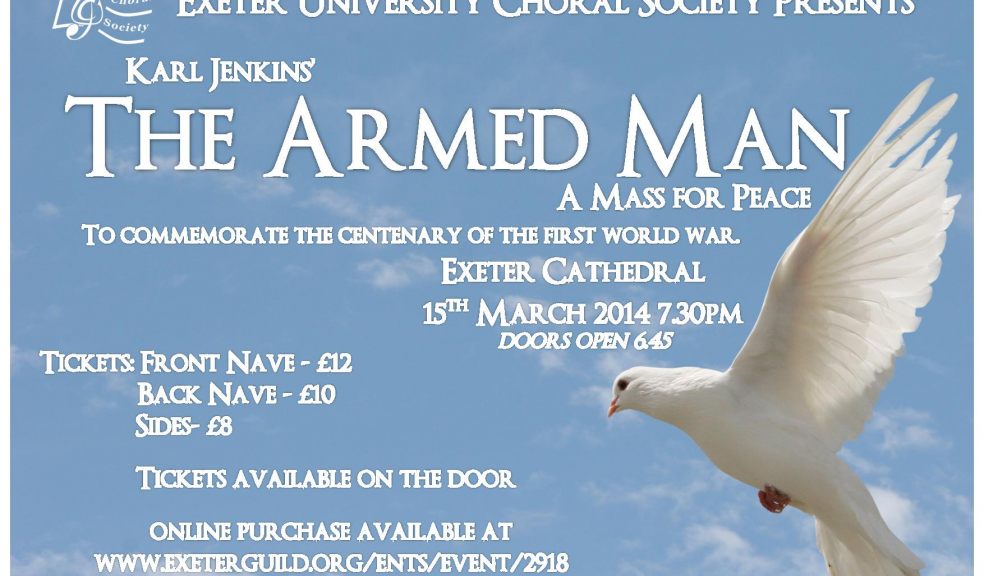 In recognition of the World War One centenary, Exeter University Choral Society is performing Karl Jenkins' highly acclaimed work The Armed Man (together with a chamber orchestra)

The Mass begins with a marching army and the beat of military drums, the orchestra gradually building to the choir’s entrance, singing the 15th-century theme tune – The Armed Man. After the scene is set, the style and pace changes and we are prepared for reflection by first the Moslem Call to Prayer (Adhaan) and then the Kyrie, which pays homage to the past by quoting (in the Christe Eleison) from Palestrina’s setting ofL’Homme Armé. Next, to a plainsong setting, we hear words from the Psalms asking for God’s help against our enemies. The Sanctus that follows is full of menace, and has a primeval, tribal character that adds to its power. The menace grows in the next movement as Kipling’s Hymn Before Action builds to its final devastating line “Lord grant us strength to die.”

War is now inevitable. Charge opens with a seductive paean to martial glory which is followed by the inevitable consequence – war in all its uncontrolled cacophony of destruction, then the eerie silence of the battlefield after the battle and, finally, the burial of the dead. Surely nothing can be worse than this? But think again. At the very centre of the work is Angry Flames, an excerpt from a poem about the horrors of the atom bomb attack on Hiroshima written by a poet who was there at the time and died in 1953 of leukemia brought on by exposure to radiation. But if we think that the obscenity of this mass destruction is new to our consciousness, we must reconsider as we listen, to the eerily similar passage from the ancient Indian epic The Mahàbharàta.

From the horror of mass destruction the work turns to remember that one death is one too many, that each human life is sacred and unique. First the Agnus Dei, with its lyrical chorale theme, reminds us of Christ’s ultimate sacrifice and this is followed by an elegiac setting of some lines I wrote (to accompany one of the dramatic interpretations we use in the museum) about the feelings of loss and guilt that so many of the survivors of the First World War felt when they came home but their friends did not.

Even the survivors can be hurt to destruction by war. The Benedictus heals those wounds in its slow and stately affirmation of faith and leads us to the final, positive, climax of the work. This begins back where we started in the 15th century with Lancelot and Guinevere’s declaration, born of bitter experience, that peace is better than war. The menace of the ‘Armed Man’ theme returns and vies for a time with Malory’s desire for peace. But time moves on and we come to our moment of commitment. Do we want the new millennium to be like the last? Or do we join with Tennyson when he tells us to “Ring out the thousand wars of old, Ring in the thousand years of peace”? It may seem an impossible dream, we may not have begun too well, but the Mass ends with the affirmation from Revelations that change is possible, that sorrow, pain and death can be overcome. Dona nobis pacem.

Programme note by Guy Wilson, former Master of the Armouries