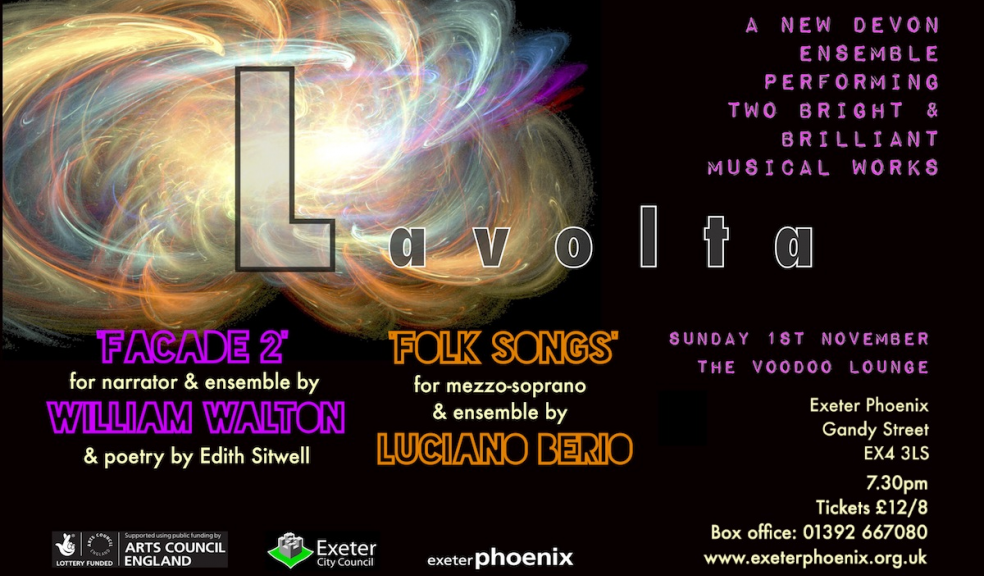 A new group of outstanding, professional Devon-based musicians will perform two bright and brilliant classics of 20th century music, featuring the voices of Sarah Owen and Kate Westbrook at Exeter Phoenix on Sunday 1st November at 7.30pm.
Musical Director, Emma Welton, has brought together some of the most adventurous musicians in Devon to play music that rarely gets heard in Exeter:

Luciano Berio’s Folk Songs, for mezzo soprano with ensemble of harp, strings, wind and percussion is a collection of songs from the United States, Armenia, France, Sicily, Sardinia and more. The songs are unearthed and recomposed by Berio who gives them a wrenchingly expressive new life.

William Walton’s Facade 2 is a much-loved collection of pieces for narrator and ensemble, setting the flamboyant poetry of Edith Sitwell. The vivid music is by turns exotic, playful and quick-witted.

Sarah Owen is part of award-winning experimental folk and electronics duo, Solarference, which will also be making an appearance on the night. “This performance is a dream come true for me” said Sarah, who has always aspired to perform Berio’s Folk Songs since she first heard a recording of the piece as a young teenager, “I can’t believe I’m going to be bringing this stunning music to life in my home town with such a fantastic new ensemble”.

Kate Westbrook has toured widely throughout the UK and Europe, and as far afield as Canada, Australia and the Far East. She has sung the role of Anna in The Seven Deadly Sins by Brecht and Weill with the London Symphony Orchestra, arias by Rossini with the Mike Westbrook Orchestra at the BBC Proms, and songs by the Beatles with the Westbrook Band in Off Abbey Road.

Lavolta is delighted to have received funding from Arts Council England and Exeter Arts Council.