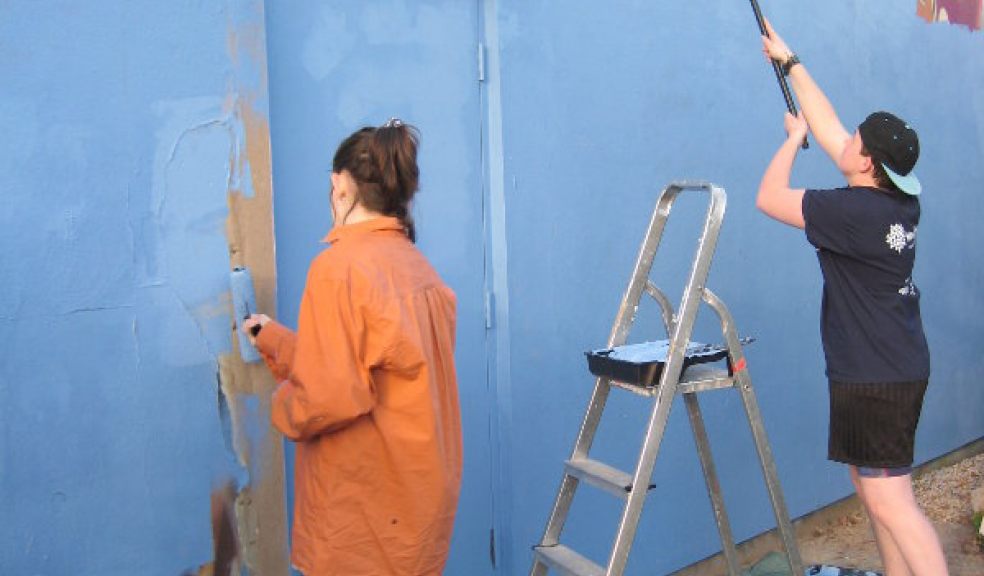 On Saturday, the route between the Exeter Phoenix arts centre and Exeter Library will be transformed, as the Freefall Youth Group wield spray cans and stencils to create a new graffiti artwork. The work, called Freefall Climate Graffiti, will feature maps of the UK showing how our climate could change in future decades.

Freefall Climate Graffiti is part of Art Week Exeter, running from 9th-15th May. It is the brainchild of two local artists: Cleo Heard, who runs Miss*C's Graffiti Academy; and Clare Bryden, an environmental artist.

Cleo and Clare have been running three workshops with Freefall during April and May. The first workshop, on the issue of climate change and creative responses, involved Met Office climate scientists. Starting with a series of maps that Clare produced using UK Climate Projections data from the Met Office, and under Cleo's direction, the Youth Group planned the graffiti wall artwork.

In the second workshop, Cleo and Clare introduced the young people to Free Art Friday, which is part of the street art movement and places artwork on the street for people to discover, enjoy and take home. Local knitting groups shared their skills, making small leaves, flowers and butterflies to decorate the wall and fencing by the graffiti wall. The group also 'bluewashed' the wall to create the artwork background.

In the third workshop this Thursday, the group will focus on making the stencils, and also prepare for making an artwork in public.

Then on Saturday between 11am and 4pm, weather-permitting(!), the group will paint the graffiti wall with Freefall's design. Anyone may come and watch on the Saturday, provide encouragement and donate knitted nature to the Free Art Friday woolly wall. The public will be able to leave and take things away in the true spirit of Free Art Friday.

Clare says: “We're really excited about this project. It brings so many of the wonderful groups and organisations in Exeter together to produce something that is fun, creative and generous. We're really grateful for the support of Exeter City Council, Wilko, Art Week Exeter, two very generous individuals, the Met Office, local knitting groups, Exeter Phoenix, and the Art Week Exeter organisers.”

Cleo adds: “The young people will be central to creating the artwork. We hope they'll gain a lot from undertaking this project in the public eye. And as well as creating art, it's a great opportunity for them to get stuck in to managing a budget, preparing a design brief, team building, problem solving, negotiating and making decisions, communicating with artists and scientists, and interacting with the public.”

Freefall Climate Graffiti will be a public artwork, available to view 24/7, so anyone who can't make it on the Saturday can still visit the Phoenix any time and take a look at the finished wall. Freefall Climate Graffiti also has a Facebook page, where the public will be able to interact, post photos and comments. There will be a small booklet about the artwork, in a limited edition to take away, as well as to download from Facebook.