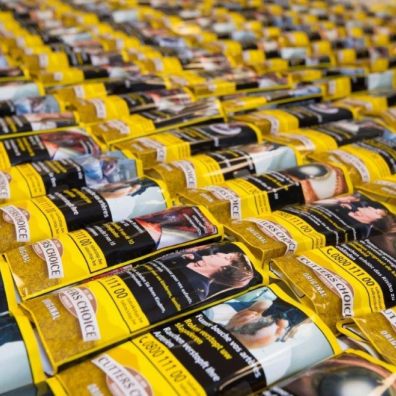 Trading Standards seized illegal tobacco estimated to be worth more than £200,000 in raids in Devon and Somerset on Friday (22 July).

The raids were conducted by officers from the Heart of the South West Trading Standards Service and supported by Avon & Somerset Police, Devon and Cornwall Police, and HM Revenue and Customs.

The seizure is one of the largest of its kind by the service. 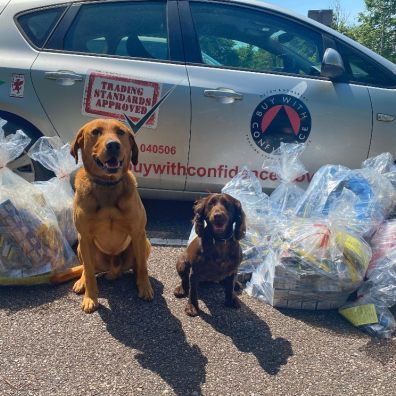 Illegal tobacco seized in raids across the region

Trading Standards has seized illegal tobacco worth more than £31,000 from six shops across Devon, Plymouth, and Somerset.

Supported by Avon & Somerset Police and Devon and Cornwall Police, officers from T he Heart of the South West Trading Standards Service used specialist detection dogs to find the tobacco in a series of raids last month (December).

Some of the tobacco was found concealed beneath floor tiles and above ceiling panels. In one instance, the tobacco was hidden in a void which lowered from the ceiling by way of a hydraulic ram platform system, operated... 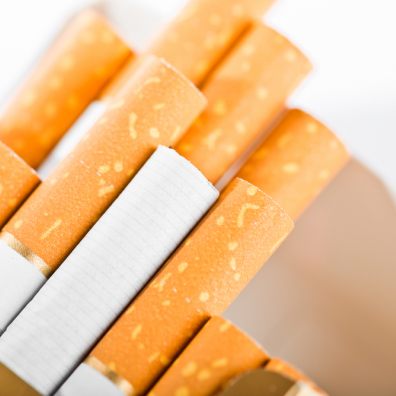 Work to stub out illegal tobacco sales in Devon is being highlighted next week.

Devon, Somerset and Torbay Trading Standards Service is visiting Green Lanes Shopping Centre in Barnstaple on Thursday 30 August between 10am and 5pm to let residents know about the real harm caused by illegal tobacco and how residents can help to prevent its supply.

The event is part of the national ‘Report it – Illegal Tobacco: No ifs, No butts’ campaign, which aims to tackle the issue of illegal tobacco in the UK.

Officers from Devon, Somerset and Torbay Trading Standards Service will... 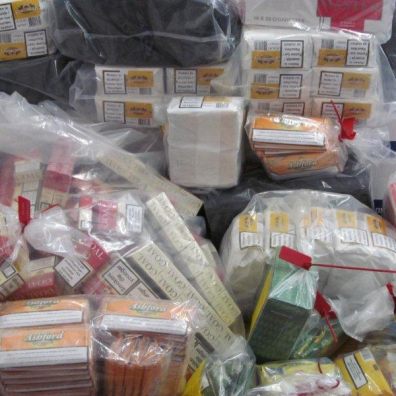 Illegal tobacco with an on-the-street value of more than £63,000 has been seized in a day of raids across Exeter.

In a joint operation on Friday 5 February carried out by Devon and Somerset Trading Standards Service and HRMC, six businesses in St Thomas, the city centre and in Pinhoe were investigated by officers, sniffer dogs and their handlers.

A mixture of retail and licensed premises and a self storage business were raided. Further investigations are being conducted by Devon and Somerset Trading Standards Service for trademark breaches. 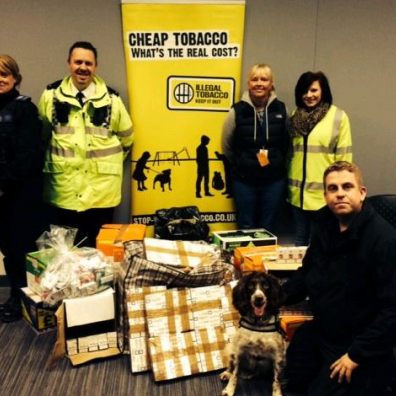 Local enforcement teams and their sniffer dogs will take to the streets of Exeter on Monday (19 October) to ask for the public’s help in tackling the sellers of illegal tobacco.

Currently over 100,000 people in Devon smoke, and around 3% of these buy illegal tobacco. Illegal tobacco is known to make it easier for children to start smoking, as it is sold at cheap prices, and is also known to make communities more attractive to criminals, who can have links to organised crime. 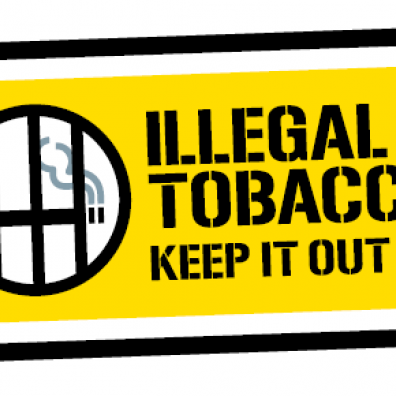 To mark World No Tobacco Day (Sun 31 May) Public Health and Trading Standards across Devon and Somerset are highlighting their work against the sale of illegal tobacco products in our communities, which is the theme of the day this year.

Illegal tobacco continues to be a major problem in the county, with the majority being offered for sale from private homes and through Facebook. In total, Trading Standards has seized 64,501 genuine non-duty paid cigarettes over the last year.

Recent operations include a seizure by Trading Standards Devon and Somerset of 6kg of counterfeit... 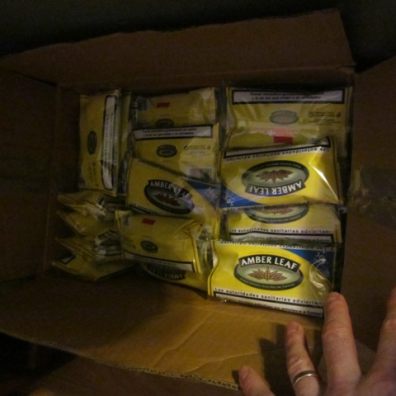 An Exeter man has been sentenced for supplying illicit tobacco and DVDs following an investigation by Devon and Somerset Trading Standards service.

Philip Martin, 62, of Masefield Road, Exeter was charged with selling, and having available to supply, tobacco which did not have the legally required health warnings or the appropriate duty paid markings; and possessing a number of counterfeit DVDs with the intention to sell them.

The court also heard that the tobacco sold by Mr Martin was counterfeit. 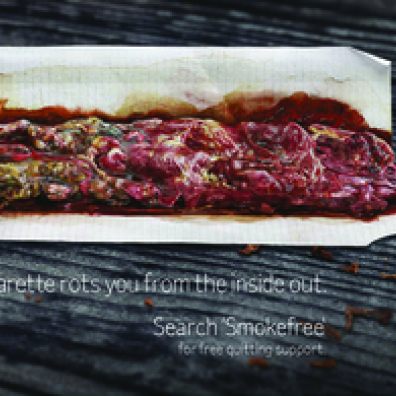 Cigarettes ‘rot’ the body from the inside

Public Health England (PHE) have launched a powerful new campaign to highlight how smoking damages the body and causes a slow and steady decline in a process similar to rotting.

The campaign starts as a new expert review commissioned by Public Health England highlights the multiple impacts that toxic ingredients in cigarettes can have on your body. While many smokers know that smoking causes cancer and harms the lungs and heart, the new... 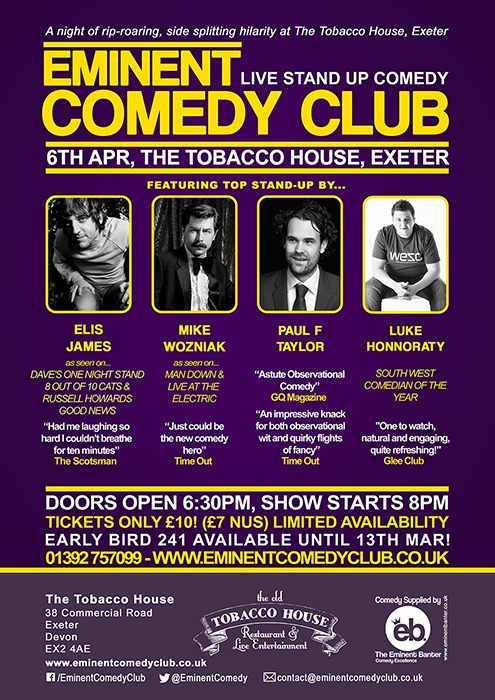 Eminent Comedy Club is returning to The Tobacco House on the 6th April, bringing another night of laughs and Pro UK stand-up talent, as seen on Russell Howard's good News, 8 Out of 10 Cats and Live at The Electric!

The night will be featuring the Elis James, Mike Wosniak and Paul F Taylor who will all be sure to have you in stitches! To take you through this comedy adventure will be resident MC Luke Honorary.

The Tobacco House also serves food, so come an make and evening of it! 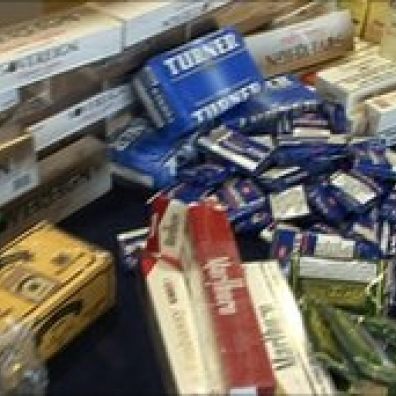 A Newton Abbot man has been sentenced following guilty pleas to selling illicit tobacco from his home, after an investigation by Devon and Somerset Trading Standards service.

65 year old Mr Roger Gerrey of 3 Lemon Place, Newton Abbot was charged with offences relating to selling and having available to supply, tobacco which did not have the legally required health warnings or the appropriate duty paid markings.

He was also charged with failing to display the correct age warning statement.

The court also heard that some of the tobacco sold by Mr Gerrey was...