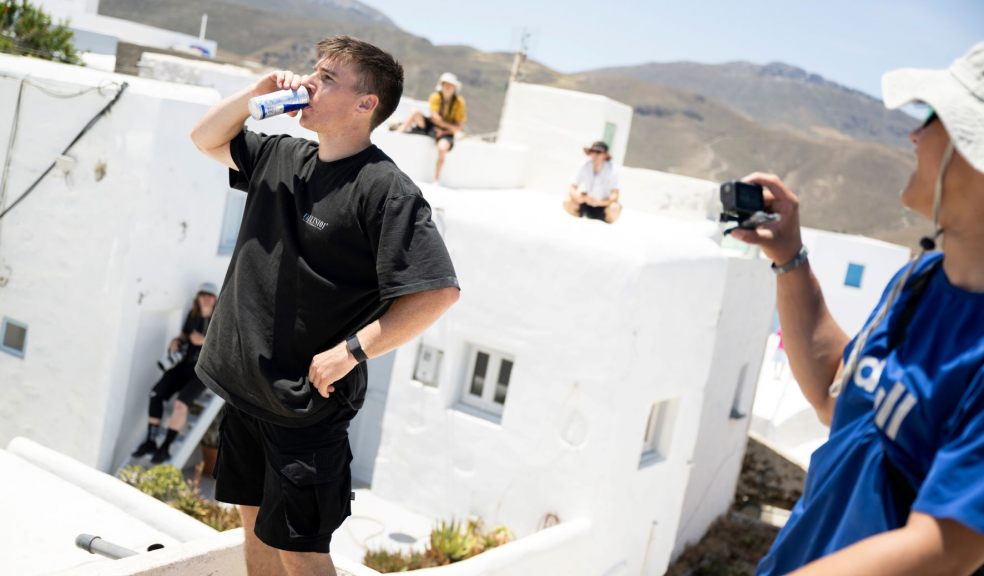 Ed Scott, 24, from Exeter leads the world’s most daring freerunning competition after one day of action.

The world’s best freerunners put on an exciting show during the first day of Red Bull Art of Motion. As the competition kicked off, daring rooftop jumps and big tricks were landed throughout the picturesque, freerunning paradise of Astypalea in Greece.

Using the island as their playground, 16 athletes from all corners of the globe pulled off some of the boldest moves in freerunning during day one’s exploration challenge, where the freerunners were challenged to create three videos showing off their own unique style.

After an intense day of competition, British athlete Ed Scott, 24, came out top of the standings, securing a maximum 7 points, with fellow compatriot Travis Verkiak, 20, coming a close second and taking 5 points.

Female freerunning sensation and fan favorite Lilou Ruel, 18, secured a top spot in the standings for best female with some incredible moves and Dutch female freerunner, Noa Diorgina, 17, put on a gravity-defying show for the Astypalea crowd.

Ed Scott, who has placed runner up in the last two editions of Red Bull Art of Motion said: “I am so stoked! I can’t actually quite believe it, because I was watching all the other athletes do what they’re so good at and I thought there was no way I would place in the top five, but I played to my own strengths with my own tricks and it’s worked out.”

Red Bull athlete Noa Diorgina said: “This is one of the best locations I have ever filmed at, there are rooftop jumps and flips and that’s extremely cool. To jump from rooftop to rooftop is amazing and so exciting.”

Some huge tricks were landed on the first day of action. Dominic Di Tommaso of Australia brought his signature big moves to the competition with some massive drops, Travis Verkiak pulled out a huge ‘double kong’ between two rooftops and Swedish prodigy Elis Torhall found a perfect spot for a ‘double full straight’ into a ‘handstand Kong gainer’ which he managed to land on his first try.

The day wasn’t without drama though, as injury struck some of the athletes, showing the true nature of this daring competition. Japanese freerunner Ryuya Kawasaki tweaked his ankle performing a ‘cartahara’ trick and last year’s Red Bull Art of Motion winner Krystian Kowalewski had to sit out the challenge after a rough landing on his first trick of the day.

A twist of fate lead to online qualifier Aiden Rudolph of the USA having to drop out of the competition at the last minute due to an injury during his preparation. Luckily, an equally skilled athlete was close at hand as the second-place finisher from the online qualifier was Aiden’s twin brother Shea.

The full standings after day one are as follows:

The athletes will now head into the final two days of competition, where the two further challenges await them, with a maximum of 7 points on offer for each challenge.

Today, the athletes will compete in their second challenge, the Spot Challenge. This will drop them in a rooftop location featuring never attempted before setups, stacked on top of each other. They have just a few hours to film a video with one of 8 of the world’s most renowned freerunning filmmakers.

On Sunday, June 12th, tune into the livestream on Tik Tok (@redbullfreerunning) and on Facebook at 3pm CEST, where the athletes will compete a live combo style event with just 3 attempts to hit their best trick in under 10 seconds.

Red Bull Art of Motion is also offering fans the chance to vote for their favourite clips from today’s incredible action. Videos from Thursday’s challenge will go live on www.redbullartofmotion.com on June 10th at 2pm (CEST) and voting is open for 48 hours.