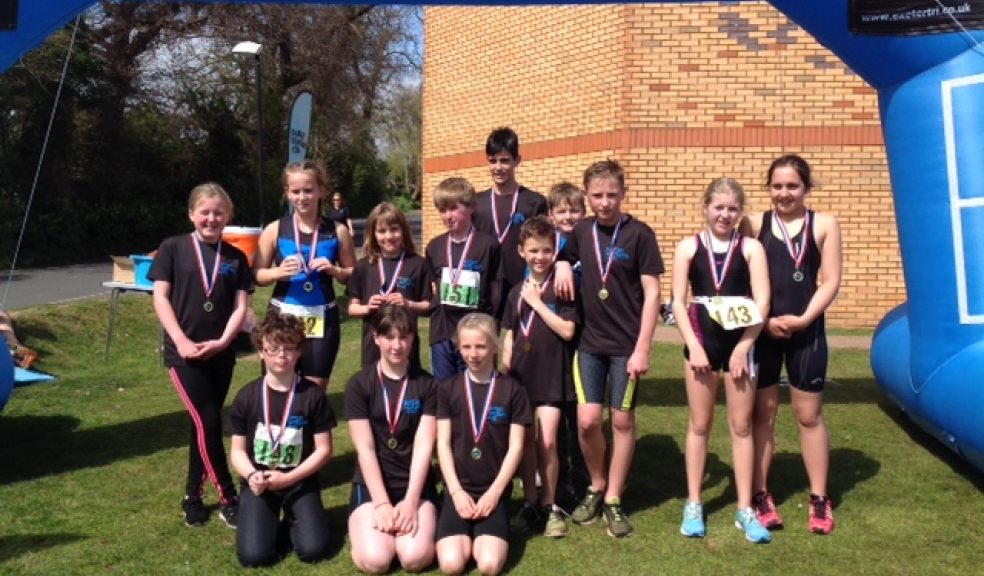 Blazing sunshine set the tone for the Exeter Tri Club Tristars Aquathlon, which took place at Dawlish Leisure Centre on Sunday, as part of the club’s aquathlon series.

The record books were broken from the club’s junior representation alone – seeing a total of 14 ETC juniors competing across the Tristart to Tristars (7-13) categories, many for whom this was their debut performance.

First off in the Tristars 1 category were Austin Crow and Jacob Price.  Jacob put in a strong first performance, setting the benchmark for future events, while Austin put in a magnificent run after a second-place swim, winning his category overall.

In the Tristars 2 category, Sam and Lily Rogers, Luca Santilo and Charlie Broderick all spread their debut wings and put in excellent efforts across their swim and run, all with big smiles as they crossed the finish line.  On her second aquathlon, Charlotte Bourner put in a strong personal best, finishing in fourth place, and Harvey Munday also put in an excellent performance, building on last year.

The Tristars 3 was a debut aquathlon for Ellen Manfield and Kiran Lake, who both put in great efforts. Millie Raymond and Leanne Fegan achieved good personal bests on last year, and Madeleine Crow finished just two seconds out of the placings in fourth place.  After a good swim and a great start to his run, Jack Renfree pulled up in his final run lap, but managed to limp across the finish line to achieve a time.

The smiles on the faces of all the contenders were testament to the great atmosphere and welcome provided by the club, and thanks should go to all the parents and other volunteers for their encouragement and support.

Andy Watts, Acting Chairman of Exeter Tri Club, said:  “Huge congratulations to all the Exeter Tri Club juniors for their individual efforts at this event.

“I am particularly pleased to see such an excellent turnout, and hopefully the buzz that was created there, and the enjoyment of the children who competed, will encourage even more to get involved in future events.

“Our juniors are the future of the club, and it’s fantastic that there is so much support for them from parents and volunteers, and so much enthusiasm from the children themselves, to get involved and compete.”