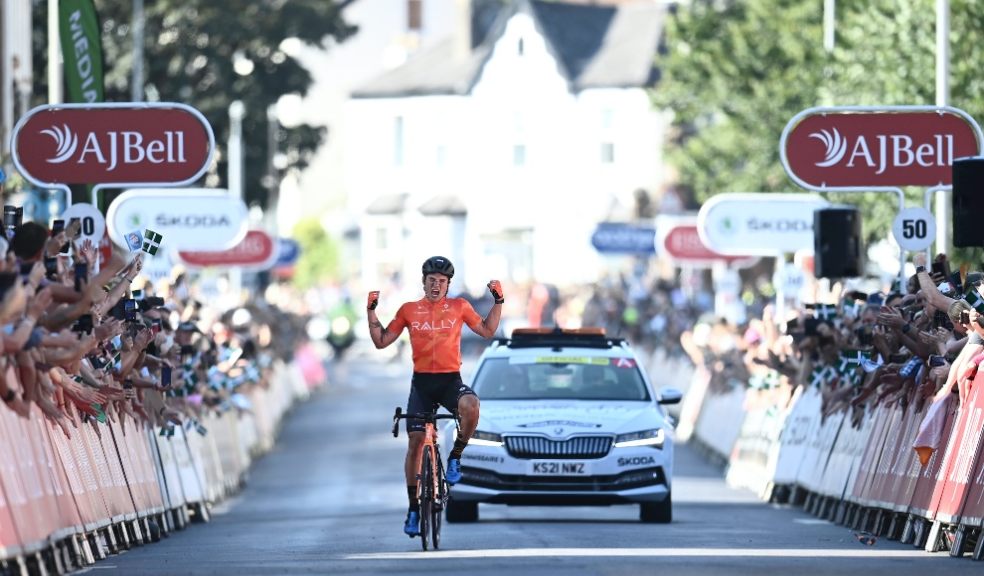 The Devon stage of the AJ Bell Tour of Britain 2021 attracted the biggest crowd of this year’s race, according to a new independent report.

The report commissioned by the Tour has revealed that around 200,000 spectators watched Stage Two along the 115-mile route from Sherford to Exeter – bringing more than £4.2 million into the local economy.

The event proved to be a welcome boost for local hospitality businesses, with the vast majority of the spending on accommodation and food and drink. The report states that 46% of those who attended the Stage were from outside the area, with 17% staying overnight.

Some of the world’s top cyclists were in action in Devon, including World Champion Julian Alaphilippe, British cycling legend Mark Cavendish and Belgium’s Olympic silver medallist Wout van Aert. However, it was Robin Carpenter, from Rally Cycling, who crossed the line first in Exeter after a brave breakaway, to become the Tour’s first American stage winner.

Communities along the route won plaudits from the professional riders and race organisers for their support. People turned out in droves in Ermington, Totnes, Dartmouth, Kingsbridge, Modbury, Ivybridge, Cornwood, Yelverton, Tavistock, Princetown, Moretonhampstead and Dunsford. And the report found that 94% of spectators who lived in a town along the route felt more pride in their hometown.

A worldwide TV audience of 17 million also watched the eight-day race which was won overall by Wout van Aert.

Councillor Stuart Hughes, Devon County Council Cabinet Member with responsibility for cycling, said: “Everyone who turned out in Devon to watch the AJ Bell Tour of Britain in September can feel proud that they were part of this spectacular event. It was a truly memorable day for all the right reasons, and as the report highlights, the race received the same massive support that we’ve come to expect when The Tour is in Devon. Devon was put on show to the world and it delivered – providing the perfect backdrop for an exciting day of racing. Spectators helped bring in an impressive £4.29 million into the local economy, which has to be welcomed as the county aims for a strong recovery from the pandemic.”

South Hams District Council’s Executive Member for Health and Wellbeing, Councillor Jonathan Hawkins, said: “South Hams is a picturesque area and a fantastic place to cycle. We were proud to host this brilliant event and it was really fantastic to see so many people lining the streets and roads to celebrate the Tour as it wound its way through the South Hams. The economic benefits to hosting this event have really supported our communities, promoted the health benefits of cycling for the body and the mind, and broadcast the beauty of the South Hams nationally and internationally.”

Councillor Duncan Wood, Exeter City Council’s Lead Councillor for Leisure and Physical Activity, said: “There was an incredible response to the race from the residents of the city and a brilliant atmosphere as thousands of people came into the city, lining the route and waiting at the finish to cheer the competitors over the line. What a race it was, with the American Robin Carpenter rising from the pack to win the 115 mile Devon stage. As the capital of Devon there was nowhere better to stage the finish than our great city and what a welcome we gave to all the competitors. For those watching on TV, the live coverage of the event was so exciting and included some breath-taking views of Devon, culminating in some stunning aerial footage of Exeter.”

Race Director Mick Bennett said: “This year’s Devon stage of the Tour of Britain will live long in the memory for a number of reasons, not least the fantastic stage win by Robin Carpenter in Exeter. Devon looked at its best in the beautiful weather and the support at the roadside was once again a highlight of the entire Tour of Britain, helping to make the stage the success it was.”

Devon has now featured in the Tour 13 times, hosting or co-hosting Stages on 11 occasions. Since Devon’s first inclusion in the race in 2007 it has brought in over £45 million to the local economy, with more than 1.9 million people having watched the race in the county in that time.