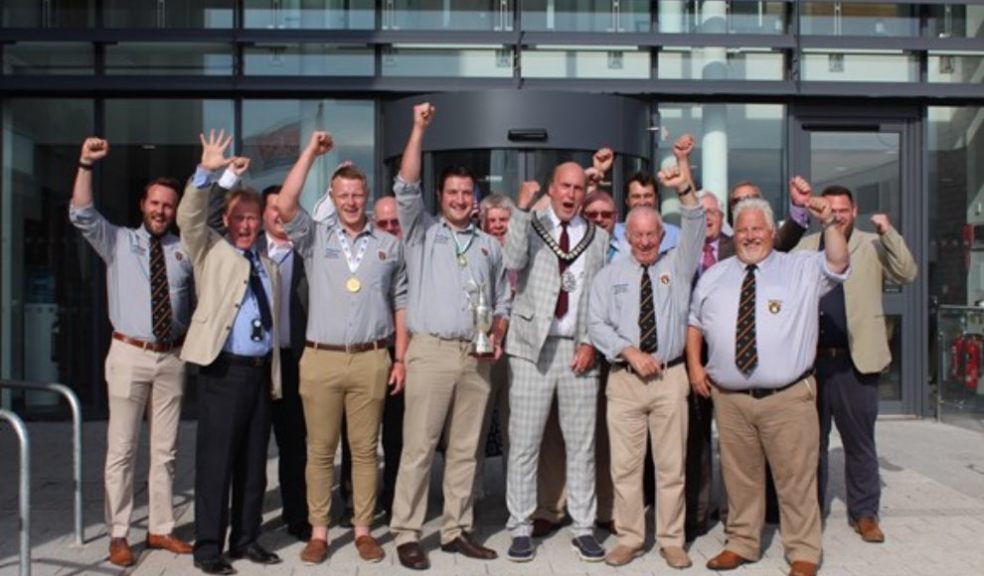 The event, which was attended by officials and players from Honiton Rugby Club, as well as East Devon councillors, was organised by the council’s Chairman Cllr Stuart Hughes and Honiton ward member Cllr Phil Twiss, who wanted to congratulate the club for their outstanding season and to acknowledge the contribution that grassroots rugby has made in helping put Honiton on the map.

Honiton Rugby Club’s achievements include being promoted into the Western Counties league and crowned Devon Intermediate Cup winners, followed by the National Senior Vase win at Twickenham, which capped off a brilliant season for the club’s senior section.

In welcoming the rugby club to Blackdown House, Cllr Stuart Hughes, said: “The team has exceeded all expectations and huge praise must go to the players, led by Head Coach Nathan Hannay, with support from Alex Brooks and Brendon Findlay, They were a credit to the club and the town, both on and off the pitch, and on behalf of the council I would like to extend our congratulations to them on their many achievements both past and present – they are a shining example of grassroots rugby at its best.

“Mention must also be made of the wonderful community spirit that the club has inspired in Honiton. Over 500 people made the journey to Twickenham to watch the Senior Vase Final, with many more watching online from their homes. The town has really got behind the team and local support has been amazing, which is something that should be commended.

“Finally, in terms of the club’s future, the council is working closely with Honiton Rugby Club to grant a new longer lease for its use of All Hallows playing fields, which will enable the club to plan for a more secure future in the town.”

Cllr Phil Twiss, ward member for Honiton St Michael’s, said: “Only losing one game at home all season, the club’s experience over the past 12 months has showcased the town’s sport admirably and not surprisingly this has gained them increasing crowds of supporters from Honiton.

“However, this success has been building for a few years and is part of our ‘Twickenham by Twenty’ vison for the club, which is about development on and off the field.

“Off the field, we have invested in clubhouse facilities that meet the needs of our growing club. This includes extending our club house, which has been built by volunteers and supported by local business, as well as small grants from the Rugby Football Union and my locality funding budget. We have also built partnerships with local businesses to support all aspects of the club, both junior and senior.

“In addition, we have developed our volunteers, offering coaching qualifications to all our junior coaches, ensuring we have high quality coaching to the 200 plus juniors who train and play with us each week in a safe and secure environment.”