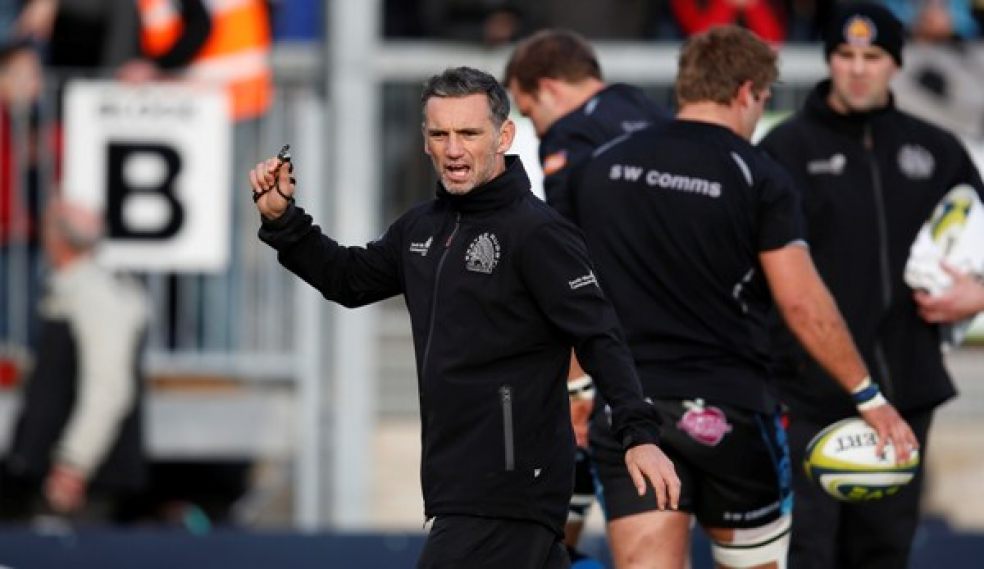 Ricky Pellow says Exeter Chiefs will look to attack from the outset when they face rivals Bath in Sunday's LV= Cup battle at the Recreation Ground (1pm).

A 19-5 win over holders Harlequins - courtesy of a Sireli Naqelevuki try and 14 points from the boot of Ceri Sweeney - gave the Chiefs the ideal start to their domestic cup campaign at Sandy Park a week ago.

Now, though, the Devon club will make the short trek up the M5 this weekend not only looking to maintain their winning formula, but at the same time record a first win over their hosts since 1978.

It's a grim statistic the Chiefs are clearly keen to address, particularly as the closest they have come to beating their nearest and dearest since arriving in the Premiership in 2010,was a 12-all draw in the top flight last December.

“We know what we need to do to beat them, it’s a case of going out and not allowing them to control how we play,” said Pellow, himself a former Bath player. “Every time we have gone up there, in the Premiership, the Cup or the A League, we have created a lot of scoring opportunities.

“The key this week is about us nailing those down. The way we’re going to approach the game is just how we do in the Premiership, we’re going to go out and attack it from minute one. If we can nail down one or two of those scoring opportunities, I think we can get that first win.”

Certainly the Chiefs showed last week that they have the personnel in place to carry out such a job as they brushed aside the visiting Londoners with an impressive display.

Opting to change their complete starting XV from that which had defeated Sale Sharks in their last league fixture, the new mix of youth and experience came together nicely to ensure Exeter maintained their impressive run of form.

“There were a few errors in the first 10 minutes of the game on Saturday, we were missing a few clear-outs, and that was probably down to guys not playing regular rugby,” said Pellow. “However, a lot of the guys got 80 minutes under their belts and they’ll now go to Bath game-ready.

"Looking back, last week was a massively pleasing performance and result for the club on so many fronts. Obviously to beat Quins in the first round and to get a foothold which will hopefully progress us on in the tournament was of course really good.

"But to also get guys back up and running after injuries and get game time into them was really pleasing, as was the need to keep the whole momentum of the club moving forward in terms of our winning mentality.

"As I said, we have talked about what is going to give us a performance. We've said we want to attack it from minute one, playing the way we want to play and influencing the game the way we want to. We know it will be tough, but the guys have prepared well this week for what will be a big, physical encounter, and if we can match that threat and then impose our own game on them, then we'll give ourselves every chance of getting a result."

Although victorious last time out, the Chiefs have indeed tinkered with their winning line-up for Sunday's showdown, making a total of seven changes to their starting XV.

Into the pack come Chris Whitehead and Carl Rimmer in the front-row, whilst James Phillips is handed his first start of the season at No.8.  Behind them, Haydn Thomas and Henry Slade form a new half-back partnership, whilst the experienced Jason Shoemark not only returns to the midfield, but also skippers the side with Welshman Sweeney dropping down to the bench. The other change sees summer Tom James brought into the back three at the expense of Jack Arnott.

And it's that strength in depth that clearly excites Pellow ahead of kick-off. The Cornishman added: "Each season we are looking to strengthen and this year shows we have a very competitive squad at our disposal. I think the side that we put out on Saturday showed just how competitive we are, both in individual positions and as a team, and I think it shows whatever side we put out, we will be competitive and really go after games.

"Again this weekend we're lucky to be picking from such quality. Obviously there are some guys frustrated at the game time they have had, but we've also talked about guys coming back from injury as well, so it's a good mix to have.

"What we are putting out - last week and this week - are really hungry guys that want to go out,  perform and put the shirt on and wear it with pride. It showed last week with the performances, both individually and collective, that it is a strong squad and everyone is competing for places."