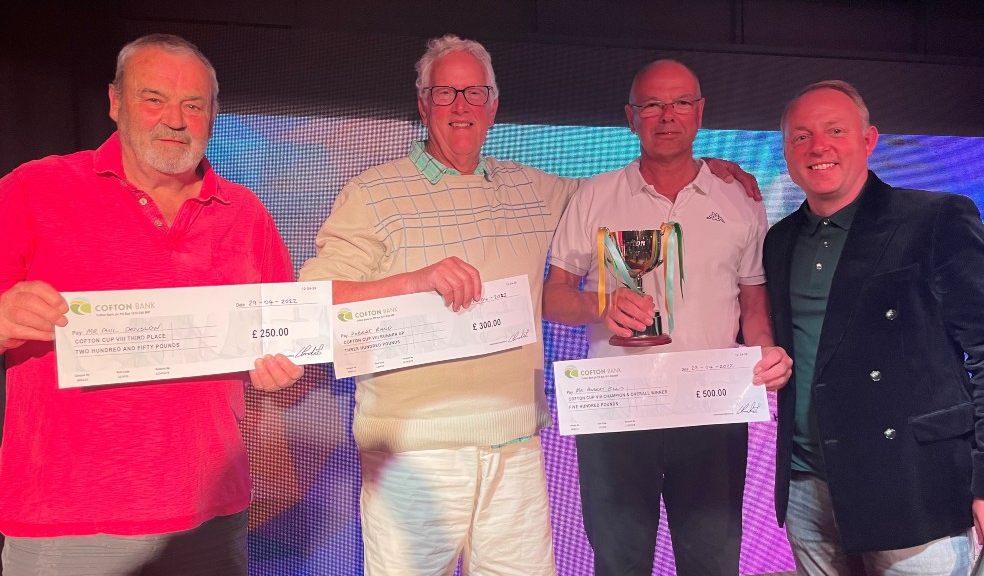 A keen fisherman, this was Rob’s first Cofton Cup, and he was up against the likes of former champions Bob Rand, and Andy Everill. The multi award-winning holiday park hosted the eighth competition on its Mamhead Match Lake over six days of intensive fishing. The field was narrowed down from 45 anglers in the opening rounds to 15 in the final. Anglers finishing in places six to 10 from the qualifying rounds battled it out for the Plate competition, and anglers placed 11 to 15 contested the new Spoon prize.

Competing against 14 experienced anglers, Rob Ellis scooped the Cofton Cup and £500 in the final, with a total of 92.01lb from Peg 13. Rob also walked away with the Dave Honey Silverfish Award after catching a silverfish net of 30.03lb. The heaviest fish of the week was caught by Lee Prophet, who netted a fish weighing 12.06lb during the first day of qualifiers.

New for 2022, the Spoon final saw 13 anglers battle it out for the silver Spoon Trophy. Craig Smith was crowned the first ever winner of the Spoon with his 45.07lb net from Peg 10. Runner-up Simon Pickney achieved a total haul of 39.08lb from Peg 15, and third place went to Kevin Gunn, after he achieved a net of 31.13lb from Peg 17.

The sun shone throughout the week, creating pleasant conditions and a great atmosphere that always accompanies cup week. The event saw three qualifying rounds over the course of the week, culminating in Friday’s grand final:

Luke Broderick, Cofton Holidays’ Fisheries Manager, was thrilled with the competition: “As always, it’s been an absolutely fantastic week with some great performances and an amazing atmosphere. We’d like to give a big thank you to everyone involved. They make the Cofton Cup what it is, the greatest fishing festival out there! We can’t wait for the next competition in October. Places are filling up fast, so we’d advise anglers to book their place early to avoid disappointment.”

Cofton Holidays has five fishing lakes making it an ideal destination for any angling fan. To meet the growing demand for fishing holidays at Cofton, the holiday park recently revealed four new luxury fishing lodges, each just a minute’s walk from the lakes, featuring special storage areas for angling equipment.

Following its success, the Cofton Cup Fishing Competition will return from 9th to 15th October 2022. Places can be booked with Cofton’s reception team and are open to keen anglers who must stay at Cofton Holidays in order to compete.

Located close to the Exe Estuary and the seaside town of Teignmouth, Cofton’s five lakes are in the perfect location to enjoy a relaxing fishing holiday. Suitable for all angling abilities, the lakes are filled with carp varying in size including mirror carp, common carp and koi-cross commons. With 71 pegs to choose from, including pegs with disabled facilities, anglers are sure to find a favourite spot.

To book your holiday and your place for the Cofton Cup IX, visit www.coftonholidays.co.uk or call 01626 890111.