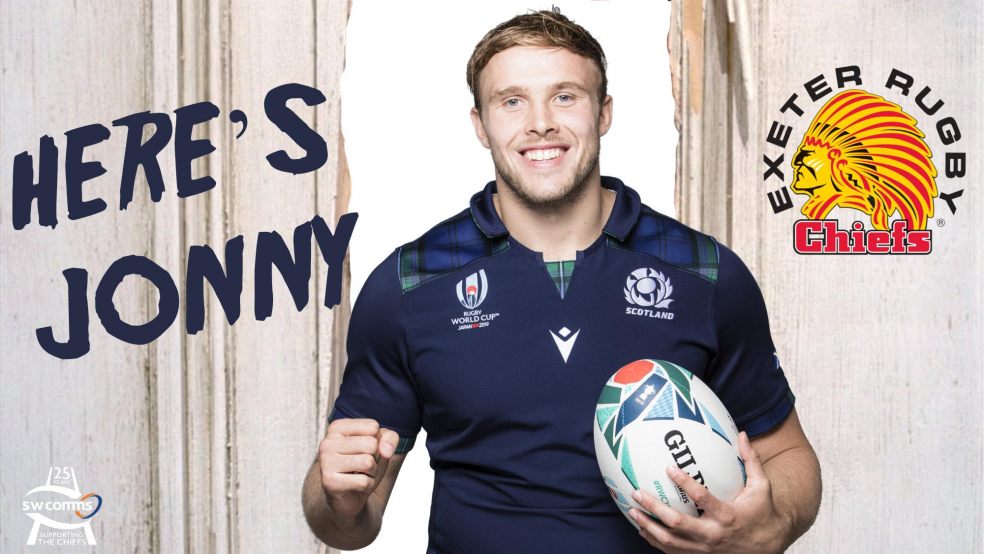 Jonny Gray says he's "excited" at the challenge that lies ahead after he today sealed a move to Gallagher Premiership outfit Exeter Chiefs.

The 25-year-old will head to Sandy Park at the start of next season on a two-year deal, bringing to a close a hugely successful spell with Glasgow Warriors.

The Scotland lock is Rob Baxter's first confirmed new arrival ahead of the 2020/21 season – and comes just 12 months after international team-mate Stuart Hogg agreed a similar switch from Scotstoun.

Like Hogg before him, Gray says the opportunity to test himself in a new environment was a telling factor in his decision to make the move south to the current Premiership leaders.

"I'm looking forward to the challenge," said Gray, who has been with the Warriors since 2012. "I see the move not only as a chance to experience something new, but at the same time it's a chance for me to develop myself, not only as a player, but as a person.

"Obviously, I've come up against the Chiefs in the past and I know just how tough a side they are and what the set-up is like down in Exeter. You can see how well they have done in recent years and at this stage in my career, I just feel it's a great opportunity for me.

"I know I still have a lot to learn as a player, so hopefully the change of club will allow me to add new things to my game."

With 55 Test caps to his name, Gray arrives in the Westcountry with a proven pedigree at the highest level. However, he admits the decision to leave Glasgow was not an easy one and that he will forever be grateful to the club for all they have given him over the years.

"Leaving Glasgow will be tough," he added. "I love Glasgow and I'm so grateful to the club and so many people associated with the club for all they done during my time there. Without doubt this was one of the toughest decisions I've ever had to make – and I will be giving everything between now and the end of the season to ensure my time there finishes on a high."

The challenge, though, of testing himself in English Rugby's top-flight is one that genuinely excites the imposing forward, who admits he has sought the view of Hogg and fellow Chief, Sam Skinner, to find out more about the inner workings of the Devon club.

"I've spoke to both Hoggy and Skins [Sam Skinner] and they've both said what a great club it is," said Gray, who is the younger brother of Scotland and British Lions forward, Richie Gray. "Hoggy says he's loving life down there and he's enjoying the challenge of being at a different club. Talking to both of them, as well as Rob [Baxter], I just felt it's the right move for me at this time in my career.

"You can see the Chiefs have a great environment and a great culture and that's very much what Glasgow is based around. The togetherness they have as a squad is clear to see, on and off the field, so it will be good to be a part of that moving forward."

Having spoken in detail with Baxter about his move, Gray admits he likes what the Chiefs' Director of Rugby outlined.

"Sitting down with Rob, I like what he had to say, not just about the club, but how they wanted to play, and how they saw things moving forward," added Gray, who helped the Warriors lift the Pro12 title in 2015 with victory over Munster.

"You can see the club are ambitious and want to win things and I'm very much the same. First things first, I want to make sure I finish strongly with Glasgow between now and the end of the season."