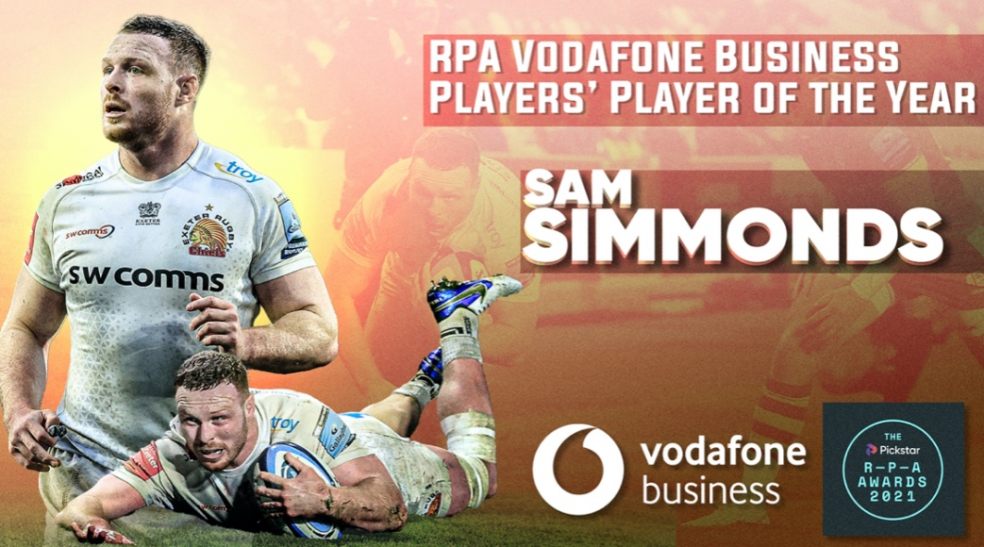 Exeter Chiefs No.8 Sam Simmonds has been crowned the RPA Vodafone Business Players' Player of the Year at this year's Pickstar RPA Awards hosted virtually for the second time on rugby podcast The Good, The Bad and The Rugby  on Wednesday evening at 6pm.

The record-breaking try-scorer polled the most number of votes from his fellow professionals to claim the most prestigious award in the English game, capping off a phenomenal season in which he has not only been instrumental for his club but also received a British and Irish Lions call up for this summer.

The 26-year-old, who was also the worthy recipient of the Champagne Bollinger RPA Moment of the Season for crossing the whitewash 19 times and counting, follows in the footsteps of 2020 winner, Wasps flanker, Jack Willis.

After European and Domestic glory last season with Exeter Chiefs, Simmonds has not let up his electrifying form. He has beaten more than 50 defenders whilst maintaining a 95% tackle success rate and sits a-top the try charts with a phenomenal 20 tries so far. His key role in Exeter's return to the play-offs has not gone unnoticed, with the forward selected for the first time by Warren Gatland to tour South Africa this Summer with the Lions.

Simmonds said: “This award in particular means a lot. The way that it is picked and the way you get nominated is from players that you play against every week and throughout the season. So for them to recognise and notice that I have been having a strong season is fantastic and I appreciate that. Once the season is over - hopefully after a few more wins - then I can look back both individually and as part of the team and feel good about what we have achieved."

Meanwhile, Marcus Smith took the title of the Sanlam Young Player of the Year. The Harlequins playmaker has been in scintillating form throughout the Premiership, playing a pivotal role in the clubs' return to the play-offs after a seven-year absence.

Smith said: “It is always nice to be honoured for individual awards, but alot of the credit has to go to my teammates at Harlequins. They've made me look good this year and without the forwards, backs I couldn't have done my job. To be voted for by fellow players who I play against week in week out makes it extra special and motivates me to win more individual honours in the future hopefully.”