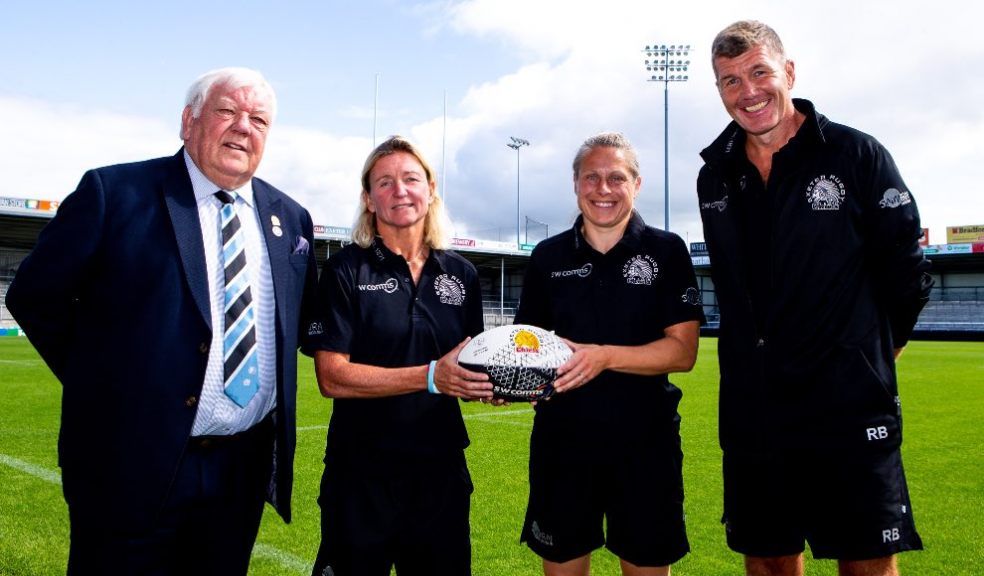 A new and exciting chapter in the history of Exeter Rugby Club has today been unveiled with the announcement that the ambitious Devon club are to create a new professional women’s team.

The team, which will be the club’s first-ever affiliated women’s team, will begin in earnest from this point with the view of tendering for a place within the Tyrrell’s Premier 15s League ahead of the 2020/21 season.

For some time, Exeter Rugby Club chief executive, Tony Rowe OBE, together with Director of Rugby, Rob Baxter, have been exploring the idea of creating a women’s team at Sandy Park – and the fruits of their labour have been revealed with today’s announcement.

As well as the creation of the new women’s team, the club will be employing former England Women’s internationals Susie Appleby and Amy Garnett as their senior coaching team.

Susie, who will take on the role of Head Coach in the New Year, joins Exeter Rugby Club from Gloucester-Hartpury Women’s team where she has been in a similar role since 2014.

A legend of the women’s game, Susie won 65 caps for England over a 13-year period and helped Gloucester-Hartpury to lift the Women’s National Junior Cup in their first season.

She has been instrumental in helping the women’s game grow nationwide and her arrival at Exeter is seen as a major coup for the newly-created club.

Susie will be assisted by Amy, who has appeared at three Rugby World Cups and is England’s most-capped hooker of all time with 100 caps. She has also previously skippered Saracens Women to successive Premiership titles, as well as the Premiership Cup in 2008.

The duo’s first role will be to use the next year to pull together a squad of players with the view of competing in the Tyrrell’s Premier 15s, as well as working with both Exeter College, Exeter Athletic RFC and the University of Exeter helping to help develop young, local players with the aim of producing talent for the future within local leagues here in Devon.

The process for the new coaches will begin immediately with Amy overseeing training sessions and fixtures for Exeter Athletic Women’s side at Bravelands, Oil Mill Lane – the first fixture of which will take place on Sunday, September 8.

Commenting on the announcement, Rowe said: “These are very exciting times for us as a club. Both myself and Rob have worked together for 28 years to help bring the men’s side through from the amateur days to that of where we now stand in professional rugby, challenging for honours both in England and in Europe. Now, our aim is to follow suit with a women’s side.

“It’s been an ambition of mine for a while now to get a women’s team up and running and we see this as a fantastic opportunity to make us not only a completely rounded club, but a club who are working incredibly hard to promote the women’s game in this country.

“We have seen in the past year alone there is a huge interest within the region for the women’s game, having welcomed over 11,000 fans to Sandy Park for a Six Nations fixture last season. Again, we hope to welcome the Red Roses back to Sandy Park again this season, plus there are strong rumours of us hosting the British Police Women’s Team in a friendly against the French Military Women in the not too distant future.”

Both Rowe and Baxter acknowledge the creation of a women’s team in Exeter will help to continue the development of the game within the Westcountry.

Baxter added: “The whole process has been for me an energizing and exciting experience. You sometimes forget we kind of went through this previously – and I was part of the process a few years ago – of what did we need to do to develop the men’s side from that semi-professional period through to being a full-time, professional outfit.

“After that, we then had to fight our way to being one of the better sides in the Championship, fulfilling the criteria you needed to get into the Premiership, winning those games to get you promoted, after which the battle you had was to stay there. In a way, it actually feels a little bit like another version of that, especially when you talk to the two people we’ve appointed to take on the role.

“Both Susie and Amy come with a huge amount of experience within the women’s game, and I don’t think we could have found a better combination to come in and not only help me, but help the club, guide us to where we need to go to establish ourselves.”

Indeed, Baxter believes the creation of the new women’s team, working alongside that of the Chiefs men’s first team, will be a ‘win-win’ for the club as a whole.

“I think it’s fantastic how much we can back them,” continued Baxter. “The one thing that is really important within the women’s game, particularly if you want to have them aligned with Premiership clubs, is there is a real buy-in from both sides.

“I genuinely think that is what we are going to have here at Exeter Chiefs. The board are very enthusiastic about establishing a very strong women’s team, our coaching group are all very excited about being part of it, and it’s something which will help us grow into an all-inclusive club that is here for everybody.

“It’s all very well saying we are a family club, working hard in the community – and I think we do that really well – but you don’t want to just pay lip service to that. You have to keep working to improve and expand things and with the plan we have in place, working not just here at the club, but at Exeter College, Exeter University and locally, I’ve no doubt it will appeal to all kinds of people.”