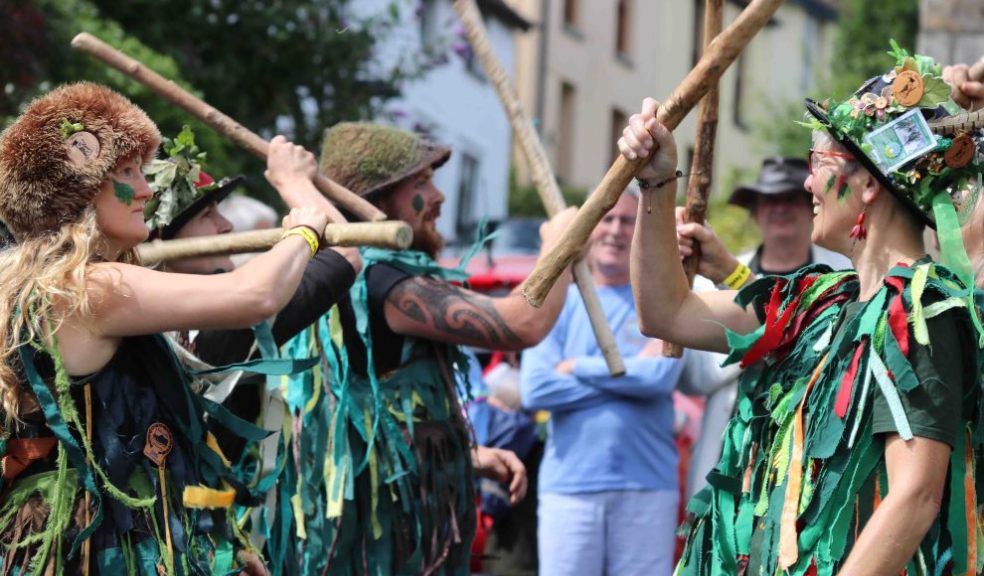 SHOWERS of rain and windy weather failed to dampen the spirit of those who attended the 42nd Dartmoor Folk Festival from August 9 to 11.

Hit by the national power outage, which affected many people across the county on the Friday afternoon, the festival brought in a large generator as a stand-by for the weekend, but its use was fortunately not required.

The festival opened with a fantastic concert by Sam Kelly and The Lost Boys, which was followed by a dance with the popular Dartmoor Pixie Band, both of which were sell-outs.

The Saturday morning saw a full range of workshops, song and dance sessions take place.  These were followed by Grand Dart-i-moor Fayre, which was opened by Chucklefoot, aka Roger Butler, who recently appeared on the television programme “Britain’s Got Talent”.

Stepdance champion was Alice Knight (16), from Hampshire, who had previously won the junior step dance championship in 2017.

This was her first year competing in the adults competition.

Stephanie Lowe (10), from Swansea, Wales, swept the competition aside in the broom dance championships, receiving the championship award.

Stephanie said she had been to every Dartmoor Folk Festival since she was in a pram and was delighted to win the award, having learned the dance steps in the festival workshops over the years.

Another highlight of the festival was the presentation of an English Dance and Song Society gold badge to Vic Legg from Bodmin, Cornwall, for outstanding services to folk music, dance and song.

Hundreds of people watched the presentation, which was made by Eddie Upton, also a gold badge holder.

There were good crowds throughout Sunday and the closing Music Hall on the Sunday evening was also a sell-out, with standing room only at the back of the marquee.

A hugely-successful dedicated children's festival ran alongside the main event.

Alan Quick, press officer for the Dartmoor Folk Festival Association, said: “It was a fantastic weekend, a bit wet at times, but rain and windy conditions didn’t stop play.

“The festival association’s wet-weather procedure was put into action and the events all transferred into giant marquees and the other usual venues around South Zeal.

“Attendance was remarkably high, in fact a sell-out for several of the events, which shows the keenness of folk enthusiasts.

“The national power cut resulted in us bringing in a stand-by generator, but this was not used.

“We installed extra road trackway on grass areas where we know it can be wet, but no vehicles got stuck or needed a push.

“The works crew kept the marquee pegs firmly secured and fortunately there were no incidents or accidents or changes to the programme other than moving the arena events under cover.”

Jane White, festival secretary, said: “We had a fabulous festival.

“The quality of the artists really shone through and despite the occasional rain and windy conditions, a good time was had by all.”

Jason Rice, chairman, added: “Everything ran smoothly and I would like to thank the 60 volunteer stewards, the association members who help stage the event, the local residents who put up with the tremendous influx of people and all those who attended.

“It really was a great festival.”

Alan Quick, added: "It was the traditional music, dance, song and crafts of the area that formed the basis for the first Dartmoor Folk Festival and they still remain for the association which runs the festival today.

"Since it was founded it has grown enormously and we are able to invite some of the best folk artists around, whilst maintaining the festival's reputation for being a relaxed, friendly and traditional festival.

“An action-packed programme was arranged and it was another great festival.

"The festival is deeply rooted in the heart of the Dartmoor community and is keeping customs and traditions alive.  It really is one of the gems in the traditional music, song and dance calendar of the British Isles.”

A campsite of more than 200 pitches operated and many people attended from across the UK.