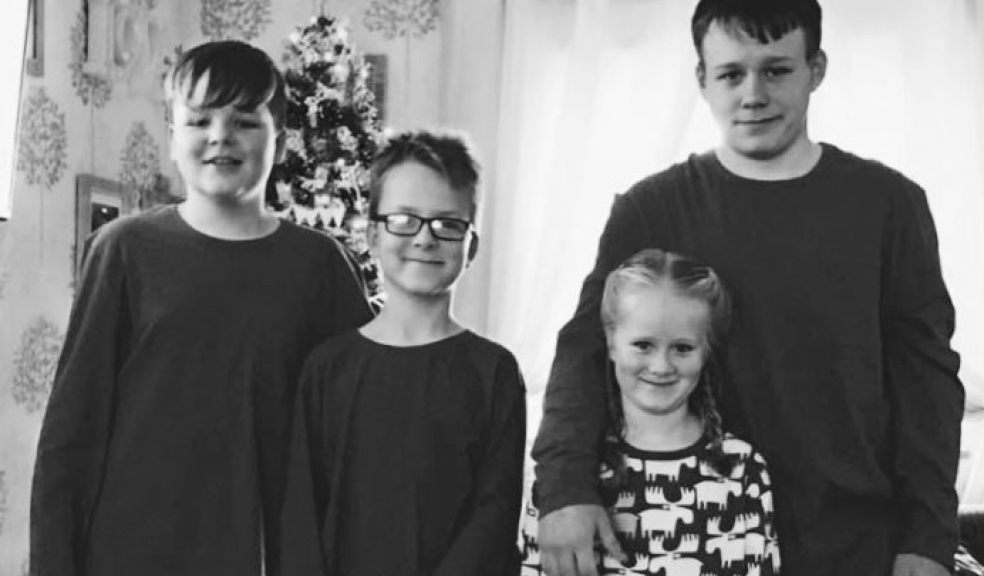 The Breakfast Run on 30 September will be a family affair for Sabrina Eastley, who is taking part with her children, Jack, age 14, Joby, 13, Harvey, 9, and Ruby, 8, and her Mum, Jackie.

They are raising funds in memory of husband and father James, who died at home in the care of Hospiscare in March this year.

James and Sabrina had been together since early 2003, when they worked together at a sweet factory in Tiverton. Theirs was a whirlwind romance and before the year was out their first baby, Jack, arrived. He was swiftly followed by Joby and, after a 3-year gap, by Harvey and then Ruby.

With four children life was hectic so Sabrina stayed at home to look after them while James worked night shifts to provide the life they wanted. “James felt the children needed the stability of a parent at home,” Sabrina explained. “He was such a hard worker and wanted to provide for us, so it made sense.”

James’ shifts, however, didn’t stop him playing a full part in the household. “James liked to cook. He found it therapeutic and always cooked the tea before he went to work in the evenings,” said Sabrina. “He was a real homebody at heart, and never happier than when with the family. We did everything together.”

Eventually, working nights began to take its toll so James took up a daytime post, which meant less disruption for the family. Life was sweet. But then came the bombshell: in October last year, out of the blue, James was diagnosed with a highly aggressive form of lung cancer.

“James took the news on the chin,” said Sabrina. “He didn’t once complain. He only made one demand, and that was to be treated at home. He was a very independent man, quite stubborn, and he didn’t want anyone but me to care for him.

“Unfortunately, though, James was in a lot of pain and when he realised that it was all going to be too much for me he agreed to Hospiscare getting involved.”

From that point on, Sabrina said, everything changed. “Hospiscare helped us so much. James’ pain was brought under control, and he agreed to have a hospital bed downstairs – even though he’d already refused that – and he was much more comfortable.

“Caroline, the Hospiscare community nurse, was a godsend – she and James really clicked. And she made sure that I was comfortable with everything that was going on with James, and took the time and trouble to explain things to the children. The youngest two, especially, were finding things hard.

“Caroline was there if James had a bad day or if I was overwhelmed with it all. She often popped in to check on us on her way home, when she was really off duty. Caroline didn’t just offer care, we built a friendship, too, and she still calls to check up on us.”

The Eastley family are one member down but they are as close as ever and facing the future with confidence, supported by family members who live close by. On 20 September they will be facing a big milestone together: James’s birthday, which they are determined to celebrate.

Ten days after that they will be taking part in The Breakfast Run, when the children will be putting on some very special nightwear, as Sabrina explained: “James’ favourite photo, taken at Christmas, is of the kids all in their new moose pyjamas. So they’ll most definitely be wearing them on the 30th – they wouldn’t have it any other way!

“We really want to give something back to Hospiscare. They were amazing with James. They helped him remain where he wanted to be – at home until the end. I can’t thank them enough for being there for him and for me and the children too. That’s why we’re taking part in The Breakfast Run.”

Hospiscare is a local adult hospice charity, providing high quality care and support to people with any type of terminal illness, and those close to them, in Exeter, Mid and East Devon. A gift to Hospiscare in your Will helps to ensure the future of the charity in Devon for generations to come.