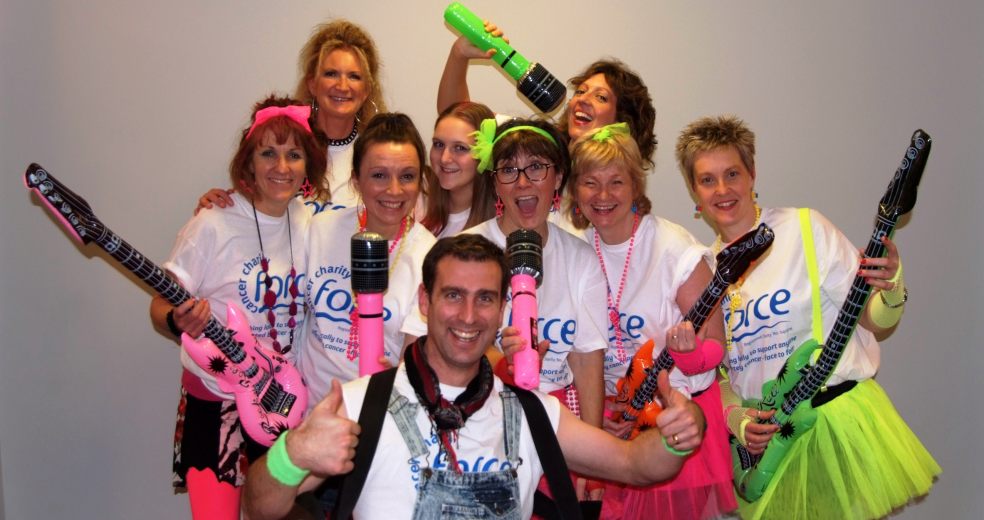 FORCE Cancer Charity celebrated the end of its 30th anniversary year with a Back to the 80s Christmas party that attracted businesses, organisations and groups of friends from across the South West.

Nearly 500 partygoers in fancy dress packed the University of Exeter Great Hall to have a good time and raise around £3,000 for FORCE, which has been supporting local people with cancer since 1987.

Ra-ra skirts, shell suits, crimped hair and costumes inspired by film, TV and gaming characters were the order of the night from Super Mario to Top Gun right through to E.T. and Dirty Dancing.

The Breakfast Club 80s tribute band and a disco had the room rocking and the feedback has been extremely positive.

Michelle Willocks-Watts said: “My table of eight really enjoyed Friday’s event at the University.  It was just so well organised, the food was great and it was a fantastic start to Christmas.  Thank you FORCE for all the hard working volunteers!”

Jon Smith added: “We had a blast, it was fantastic. The band were great, brilliant atmosphere and great fun. Thank you and the team for organising!”

Mark Godfrey from the Deer Park Country Hotel near Honiton said: “We had a fabulous night thank you! So pleased you raised so much for the charity. Please let us know the theme for next year ASAP!”

Thank you for organising such a great party, we all had a fantastic evening,” said Caron Winter from Sampson Hall.

Lindsey Carpenter added: “Thank you so much for putting together such a fab evening! We had the best xmas works party ever! It was well organised and the band were amazing! We are already looking forward to next year’s! Hope the event raised lots of money for such a great local charity!”

Sarah Daniels, FORCE Head of Income Generation, said: “We cannot thank everybody enough for getting behind our 80s theme. The night was a huge success with everybody having a great night and a good sum of money raised for the charity. Now we just need to work on next year’s theme!”