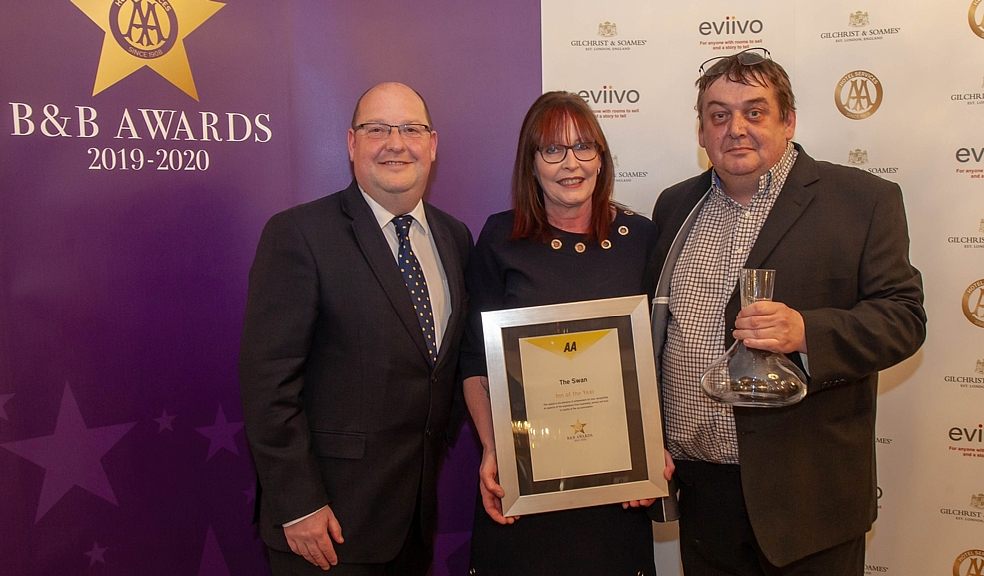 THE AA named The Swan in Devon as the nation’s ‘Inn of the Year’ at a star-studded awards event in London recently (April 30, 2019).

The Bampton pub, which is no stranger to accolades, having already this spring been declared for the third year running as one of the top 50 gastropubs in the country, is now celebrating again.

Chef-patron Paul Berry, who co-owns The Swan with his wife and fellow award-winning chef Donna, said: “This is wonderful news and we couldn’t be more delighted. We win lots of awards for our food, so it’s great to be acknowledged now for the hospitality we offer too and for our pub’s lovely B&B rooms. We offer the complete package!

“We’d like to congratulate all the winners and runners-up at this year’s event in all the categories. The competition was strong and to be in the same room with so many other wonderful B&B providers was pretty special.”

AA Hotel & Hospitality Services announced the winners of this year’s prestigious AA B&B Awards at an event held at the four-star St. Ermin’s Hotel in London.

The annual event, now in its 24th year, recognises the diversity and individuality behind some of the nation’s most remarkable B&Bs and celebrates the people that devote their lives to running them.

It is the first time AA Hotel & Hospitality Services has had this particular category, so The Swan is the first pub to be named ‘Inn of the Year’ by the organisation.

Simon Numphud FIH, Managing Director AA Hotel & Hospitality Services said: “The Swan is everything one would want in a pub, a great welcome, a proper pub in a proper place, nothing contrived here and built upon hard graft and integrity. Rooms full of extras, cosseting and underpinned by care and pride.  The owners have clearly poured their heart and soul into this superb inn and we are delighted to recognise The Swan as our inaugural AA Inn of the year.”

The multi-award-winning pub also polled in at number 20 this spring in the ‘Estrella Damm’ Top 50 Gastropub Awards, which are voted for by food writers, executive chefs, celebrity and top hospitality industry chefs, pub guide editors, industry chiefs and food operators.

It received a special award as the highest climber in the list in 2018 when it was rated 28th.

The Swan also scooped a plethora of other awards last year including being named Gold Tourism Pub of the Year 2018 at the South West Tourism Excellence Awards and being voted Best Dining Pub for 2018 in the Trencherman Awards.

It has also retained its four AA Gold Stars and two AA Rosettes for Culinary Excellence in 2018, for the fourth-year-running, and chef-patron Donna Berry was a finalist in both the Devon Life and Trencherman Awards.

Paul added: “It’s going to be a very busy year for us as we’re taking on the old bakery shop in Bampton and making it into a restaurant called Spelt very soon. We’ll serve a collection of dishes that have been developed for sharing, so no starters as such and no mains either, so if two people are going to eat, possibly they’d have four or five plates of food.

“It’s an exciting time for us with something fresh on the horizon. Whatever happens we will not be taking our eyes off the ball at the pub. We have a deep-rooted passion for The Swan, and it is just as important to us today, as it was eight years ago when we took it on.”