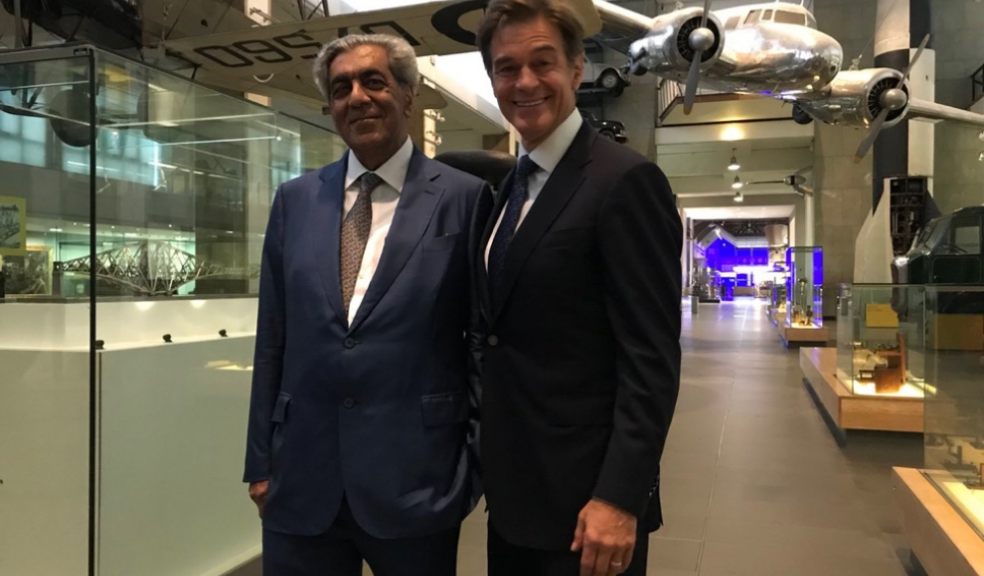 It's not every day that a person gets a second chance at life. However, that's exactly what Sudhir Choudhrie got more than 20 years ago when he underwent a complicated emergency heart transplant performed by Dr. Mehmet Oz, the popular television personality who is also a renowned heart surgeon. Choudhrie, who had struggled with heart disease for most of his life, received a new heart at Columbia Medical Center in New York City. He recovered completely and has thrived over the past two decades.

Since his transplant, Choudhrie has made it his life's work to give back to the community that saved his life and to inspire other families dealing with heart disease. Says Choudhrie, "I owe it to my donor, to other heart donors and those needing transplants to try to do as much as I can to share my experience and knowledge ... there is still a lot of fear and ignorance surrounding (heart transplants)." Choudhrie has spent a large portion of his life after the transplant giving back to the medical community. He has also written a book titled "From My Heart: A Tale of Life, Love and Destiny" about his experiences. Recently, he was a guest on “The Dr. Oz Show.”

Sudhir Choudhrie appeared on the doctor's show as part of his mission to give back to those who helped him and his family and to highlight his involvement with Dr. Oz's HealthCorps organization. As Dr. Oz explained in the intro to the segment with Choudhrie, "(Choudhrie) knows that he can never put a price tag on the gift of life that was given to him ... but, he's sure going to try." A serial entrepreneur worth more than two billion dollars, Choudhrie has a thirty-year history of nurturing and growing businesses, such as the TAJ hotel group and India's Air Deccan. His business career has earned him the funds to be able to be very generous at this stage in his life.

The segment on "The Dr. Oz Show" highlighted Dr. Oz's HealthCorps organization, a nonprofit that Dr. Oz formed with his wife to promote healthy living and disease prevention in children. One of the latest initiatives for HealthCorps is to educate kids about organ donation and get families to sign up to be organ donors. "You never know when you can save a life," explains Dr. Oz. Hundreds of heart transplants are performed each year, but more than 120,000 patients are currently waiting for a life-saving organ. Sudhir and the Choudhrie Family Foundation have been a big part of this initiative. The joint #OrgansWill campaign seeks to sign up 62,500 new organ donors in the United States. These new donors have the potential to save 500,000 lives.

Sudhir Choudhrie, now 67, has put actions behind his words for the last 15 years. Soon after his recovery, he became involved in supporting Columbia Hospital, the medical center where his life-giving surgery was performed. In 2009, he donated $2.5 million to fund the Sudhir Choudhrie Professorship of Cardiology in Medicine at Columbia University Medical Center. Choudhrie and his two sons also sit on the advisory board of the hospital. Recently, the Choudhrie Family Foundation funded the Choudhrie Family Student Lounge in the new Roy and Diana Vagelos Education Center of the Columbia University Medical Center. According to Columbia University, this new facility is "a dedicated center for medical students to steal a breather out of their mundane routine and relax for a while." Explains Choudhrie about his philanthropy, "I feel immense gratitude to the doctors at Columbia who saved my life and to the family of my donor."

In forming the nonprofit  Choudhrie Family Foundation, the Choudhrie family had the goals to support medical research and education and to be a resource for families and patients facing the prospect of an organ transplant. Most recently, the foundation has helped fund a new HealthCorps campaign to educate teens (and their parents) about the importance of organ donation.

All U.S. proceeds from Mr. Choudhrie's book are automatically donated to the foundation.

About Dr. Oz and HealthCorps

While most Americans know Dr. Mehmet Oz best from his four-time Emmy-award-winning television program "The Dr. Oz Show," Dr. Oz is also a renowned heart surgeon and a professor in the Department of Surgery at Columbia University. He and his wife, Lisa, founded HealthCorps in 2003. Dr. Oz said of the effort, "Lisa and I are so proud of HealthCorps’ impact on America’s youth over nearly two decades." In addition to promoting organ donation, HealthCorps helps to educate young people about mental and physical wellness and give them the tools they need to live healthy lives.”

To learn more about signing up to be an organ donor, visit healthcorps.org. A free excerpt from Choudhrie's book is available on Amazon.com.

Oz's HealthCorps organization. As Dr. Oz explained in the intro to the segment with Choudhrie, "(Choudhrie) knows that he can never put a price tag on the gift of life that was given to him ... but, he's sure going to try."