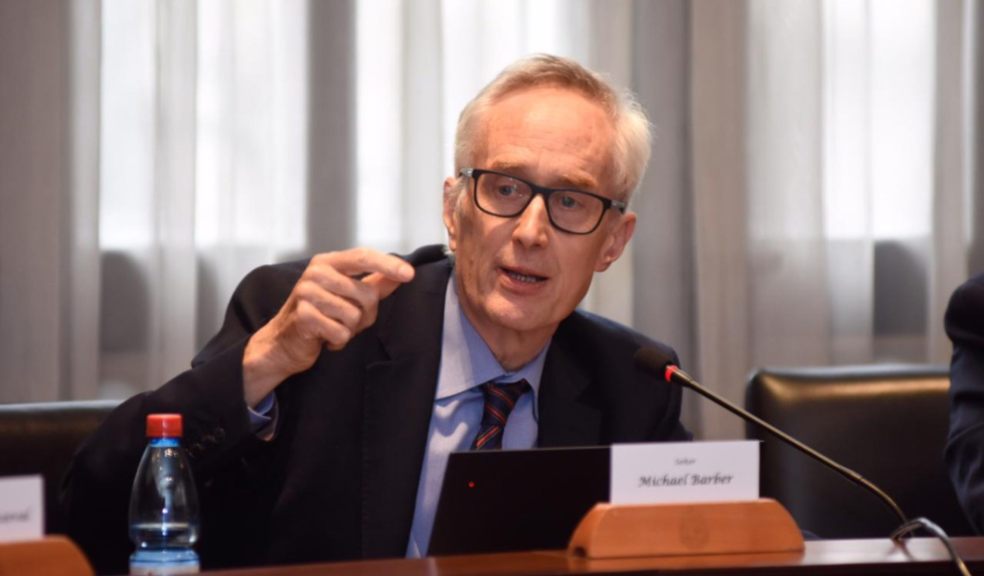 A world-leading authority on education and public service delivery is to become the seventh Chancellor at the University of Exeter.

Sir Michael Barber, once described by Time magazine as ‘the single most influential educator on the face of the earth’ and who has been at the forefront of education and public life for more than two decades, has been appointed as the new Chancellor.

Sir Michael will take over from Lord Myners of Truro, who is stepping down after five years in the role, on January 1st 2022.  Lord Myners succeeded Baroness Floella Benjamin in July 2016 and during his time as Chancellor has shaken the hands and signed the graduation certificates of 20,000 students, and has played a prominent role in supporting the University’s fundraising and alumni relations.

Sir Michael has an outstanding reputation in the Higher Education sector, having been the inaugural Chair of the higher education regulator, the Office for Students, until March 2021. From January to July 2021 he assisted the Prime Minister and Government on delivering their domestic policy priorities following the pandemic.

From 1997 to 2001 he was the Chief Adviser on School Standards in the Department for Education. In 2001, he founded for Tony Blair the Prime Minister’s Delivery Unit (PMDU) in No10, Downing Street, which he ran until 2005. In this role he was responsible for ensuring delivery of the government's domestic policy priorities across health, education, crime reduction, criminal justice, transport and immigration.

The sustained focus on delivery from the heart of government, and the processes the PMDU developed, turned out to be a significant innovation in government, of interest to numerous other countries and major global institutions such as the IMF and the World Bank. From 2005 to 2011 he was a partner at McKinsey and Company and Head of its global education practice. From 2011 to 2017 he was Chief Education Advisor at Pearson, where he played a key role in Pearson’s strategy for education in the lowest income sectors of the world, especially in fast-growing developing economies. Also during that time he visited Punjab, Pakistan more than 50 times to assist in reforming its education and health systems.

Sir Michael has worked on delivery and system-wide reform in more than 50 countries and is the Founder and Chairman of Delivery Associates.  With his leadership, Delivery Associates works with government leaders across the developing and developed world to enable them to deliver their domestic policy priorities. The governments Delivery Associates has worked with include Albania, Canada, Ethiopia, New South Wales in Australia, Peru and the mayors of numerous US and Latin American cities.

Sir Michael said: “It is a huge honour and privilege to be invited to take on the role of Chancellor of the University of Exeter, which is a world-leading institution at the forefront of research, scholarship and teaching. Its ground-breaking work in subjects such as environmental science, medicine and the humanities, is admired around the world. Its students and graduates play vital roles in communities and countries in the UK and abroad. As someone who lives in Devon, I am also constantly aware of the immense contribution the University makes to the West Country as a whole, through its campuses in Cornwall as well as Exeter, and through the research and development it contributes to the regional economy.”

Sir Michael was educated in York before studying history at the University of Oxford, where he was President of the Queen’s College Student Union.  In 1986 he was elected as a councillor for Hackney Council and became Hackney’s first Chair of Education in 1988.  He was a teacher from 1979 to 1985 before joining the staff of the National Union of Teachers. He then became a Professor of Education, first at the University of Keele and then at the Institute of Education, London, where he worked on school- and education system improvement. In 1997 he joined the Department for Education.

Professor Lisa Roberts, Vice-Chancellor of the University of Exeter, said: “I’m deeply honoured to be announcing Sir Michael as our next Chancellor, whose passion for education is a true inspiration to our whole community.  He is highly influential on the national and international stage and has built up a distinguished global reputation. I know he will make a fantastic Chancellor and I am really looking forward to working with him to achieve the ambitions within our new 2030 strategy.”

Sarah Turvill, Chair of Council, the governing body of the University of Exeter, said: “I am delighted to welcome Sir Michael to the University in this important role. Sir Michael lives in Devon and shares the University’s commitment to the South-West region. We are all looking forward to working with him in the years ahead.”

Lily Margaroli, President of the University of Exeter Students’ Guild, said: “I am extremely excited to have Sir Michael joining us at the University of Exeter. I am excited to see his extensive experience and expertise utilised to take our institution from strength to strength in what will undoubtedly be an interesting few years for the higher education sector. It will be an honour to have the opportunity to work alongside someone with such influence and vision, our students are in safe and capable hands!”

Steven Preece, President of the Falmouth and Exeter Students Union said: “With such an extensive and successful career in education and public life, we are confident that Sir Michael Barber will be a strong and inspiring role model for University of Exeter students. We look forward to welcoming him to the University in time for summer graduations in Exeter and in Cornwall in 2022.”