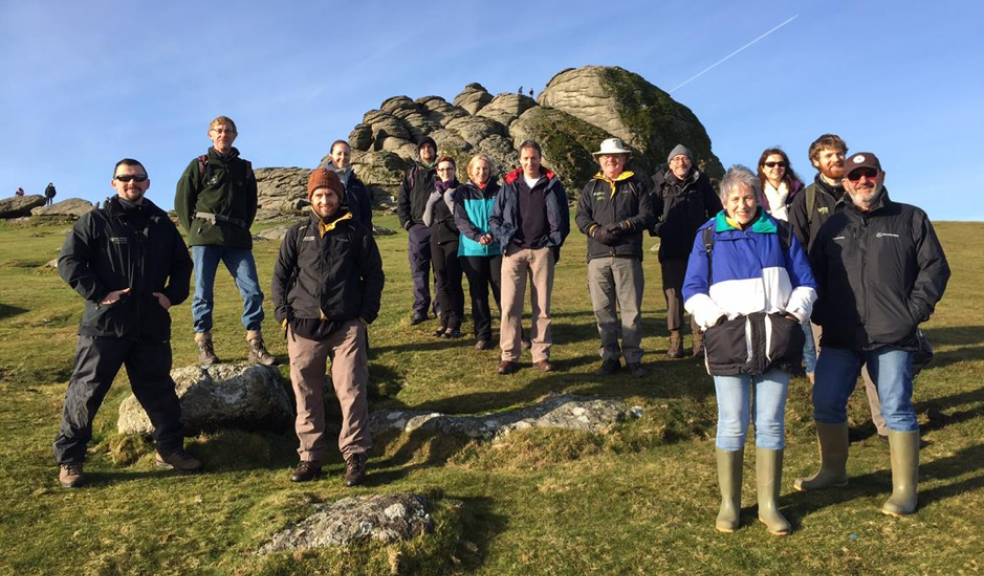 Conservation volunteers who help maintain one of Dartmoor’s top beauty spots have rounded off their year with an expert guided tour and mince pies.

The Second Sunday group meets every second Sunday of the month at Haytor under the guidance of National Park Authority Ranger Simon Lee.

In the past 12 months they have repaired an ancient leat to prevent flooding on the road near the Visitor Centre and restored wetland by the Becka Brook to safeguard the feeding grounds of the rare marsh fritillary butterfly.

Perhaps the volunteers’ most obvious work has been on the 200-year-old granite tramway that once took quarried stone from Haytor to the Stover Canal at Teigngrace.

The team has uncovered hundreds of metres of rails that were lost under peat, gorse and bracken.

On Sunday December 11, under clear skies, the group were treated to the company of National Park archaeologist Andy Crabb who led a walk across Haytor and Smallacombe Rocks.

He explained how the landscape they helped to preserve had evolved through human influence over the past four thousand years. Pointed out to the group were Bronze Age roundhouses, burial cairns, medieval tin workings and Second World War weapons emplacements.

In the quarries Andy revealed the whereabouts of a ‘feather and tare’ set that had remained untouched since being broken while splitting granite.

The group finished their three-hour ramble with hot drinks and mince pies back at the Haytor Visitor Centre.

Simon Lee said: ‘Without the Second Sunday group I simply couldn’t have embarked on projects such as the granite tramway, so today was my way of saying thanks.’

‘Every month we get anything up to 20 people turning out to do their bit in all weathers including snow, driving rain and blistering sun.’

‘They are always cheerful and good company and together we have a great time doing something constructive in a wonderful yet fragile environment.’

‘Now we’re looking forward to 2017 and projects such as erosion repair and more work on the leat and tramway.’

‘If you see us do come and say hello, perhaps we’ll even persuade you to sign up.’

For information on joining the Second Sunday volunteers call Simon Lee on 07711 104541 or email slee@dartmoor.gov.uk