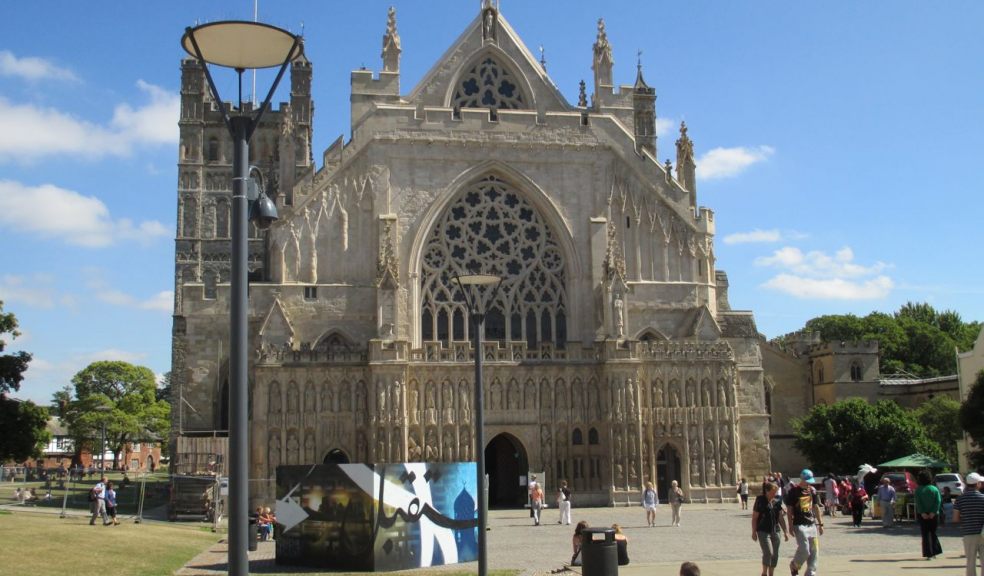 The 10ft cube of Islamic graffiti art, standing in front of Exeter Cathedral forms part of a University of Exeter research project which investigates how Muslim belief has developed through theology, spirituality, law and the creative arts.  On Saturday 7 September between 7 – 8.30pm there was a special event in the Cathedral focusing on the role of Christianity and Islam in public spaces.

A range of speakers discussed the role and positive contribution that religion brings to the society in which we live.  The topics varied from how religious art can assist as a useful form of communication between different religions and cultures to the identification of ways in which both Christianity and Islam embrace different cultures.

Professor Rob Gleave from the University of Exeter’s Institute of Arab and Islamic Studies, chaired the discussion and is the lead academic on the ‘Islamic Reformulations’ project which commissioned the ‘FutureCube’.  He said: “Having the FutureCube at the historic Exeter Cathedral presents a unique opportunity to display the role of faith in the public sphere. Saturday’s event at the Cathedral is one of the first of its kind in the area to show the contribution of religion to society. Such an event is particularly pertinent in the South West where people do not often have interaction with other faiths and cultures.”

The range of panellists contributing to the discussion included the Dean of Exeter Cathedral, the Imam from the Exeter Mosque, an interfaith practitioner and academics from the University of Exeter’s Institute of Arab and Islamic Studies.

The discussion also included a contribution from the artist Mohammed Ali (Aerosol Arabic), the creator of the ‘FutureCube’ which was initially exhibited at the University of Exeter, whose work merges traditional Islamic art with modern street art. The cube is an interpretation of how religious belief is expressed in new ways in contemporary times.  Each side of the large cube displays a different setting, with desert and rural urban landscapes. The Arabic word ‘Al Mustaqbal’, which means future, wraps around the cube which will be on display outside Exeter Cathedral until 10 September.

Mohammed Ali said: “Having created the FutureCube at the University of Exeter, where academia and street art met was exciting enough. Now, for the first time in my career I’ve been given a platform at a cathedral which is one of the UK’s oldest and finest monuments to show how public art can build bridges between faiths. Public art has been taken to another level. The city’s passersby can view the Islamic-inspired cube outside the Cathedral that represents the fast changing society that we live in.”

Prior to the roundtable discussion, Mohammed re-touched the artwork of FutureCube with an assortment of colourful aerosol cans from 5.30pm on the Cathedral Green.

The Dean of Exeter Cathedral, the Very Revd Jonathan Draper said that he was thrilled that the Cathedral Green was chosen to host the cube.  He said: “This dramatic piece of art makes an important statement about faith and society in Exeter, and the dialogue between our two faiths.”

This special event links into the University of Exeter’s ‘Islamic Reformulations’ project, funded by Research Councils UK and administered by the Economic and Social Research Council.