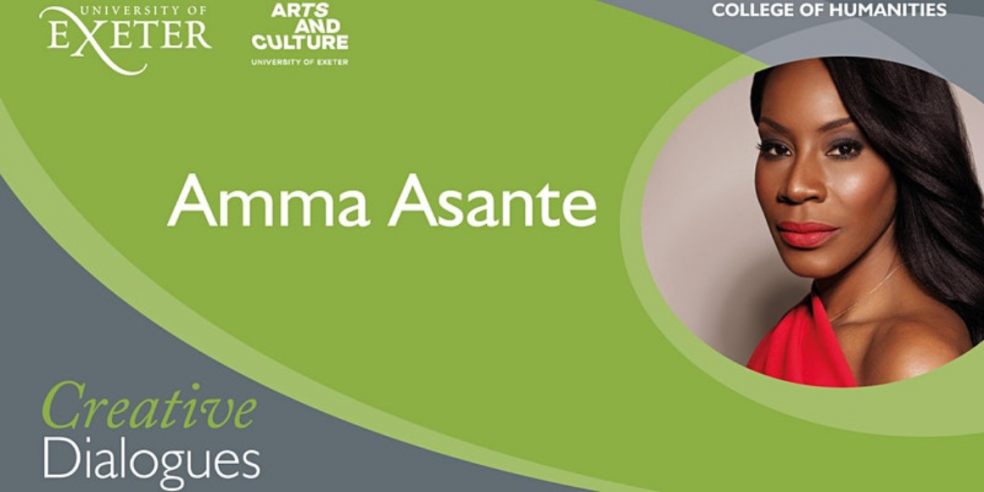 On Tuesday 25th May, renowned BAFTA award-winning writer and director Amma Asante MBE will join the University’s College of Humanities for the second of their exclusive online Creative Dialogues events for 2021.

Exploring her distinguished body of work, including her 2004 BAFTA award-winning film A Way of Life, Amma will share fascinating insights into her creative journey and career as a writer, director, producer and filmmaker.

The free event will be hosted by Linda Williams, Professor of Film at the University of Exeter who is currently working on an AHRC funded project called  Calling the Shots: Women and Contemporary Film Culture in the UK, 2000-2015 which focuses on contemporary women filmmakers.

Speaking ahead of the event Amma said: "There really has never been a more exciting time to be a woman, talking about film.  Professor Linda Williams just happens to be one of the most enlightened people I know, on the subject...plus she is a film oracle! I really can’t wait for the Creative Dialogues event at the University of Exeter on May 25th, where we can celebrate progress, explore the creative journey, compare the films that have helped shape us... oh and maybe put the world to rights too!"

Amma’s BAFTA winning film A Way of Life (2004) made her the first Black director to win a BAFTA Film Award for writing and directing a feature film and garnered 17 additional awards worldwide.

Her movie, Belle (2013) drew widespread acclaim, becoming one of the highest grossing independent films of the year, and in 2016, A United Kingdom, for Pathé and Fox Searchlight, saw Amma celebrated as the first Black director to open the BFI London Film Festival in its 60-year history.

In 2017, Amma was named an MBE in the Queen’s Birthday Honour's list and 2018 saw the release of Where Hands Touch. Set in 1944, Germany, the film, inspired by historical events, starred Amandla Stenberg, and was distributed worldwide by Sony.

Amma will helm, the adaptation of The Billion Dollar Spy, starring Mads Mikkelsen. Based on the book by Pulitzer Prize winning journalist, David E. Hoffman, it tells the true story of Adolf Tolkachev, who became the Pentagon’s most valuable spy during the last years of the Cold War.

Amma has additionally directed episodes of Hulu-MGM’s The Handmaid’s Tale and the Emmy nominated and winning ‘Betty’ and ‘Shirley episodes of Mrs America for FX.

Creative Dialogues is a series of exclusive ‘in-conversation’ events showcasing a range of high-profile speakers who are leaders in their respective fields across the creative industries and Humanities. The events provide a rare opportunity to join internationally-renowned professionals in person and learn first-hand about their colourful careers and life works.

The events are part of the University of Exeter’s Arts and Culture Strategy, which celebrates the University’s outstanding contributions to arts and culture in Devon and Cornwall.

It promotes international cultural relationships and dialogues, through highly-ranked arts research and teaching, practice and performance.

The event will be held online on Wednesday, May 25th from 6.30-8pm. To register and for more information, please visit the Eventbrite page https://www.eventbrite.co.uk/e/college-of-humanities-creative-dialogues-series-tickets-1 52328794525