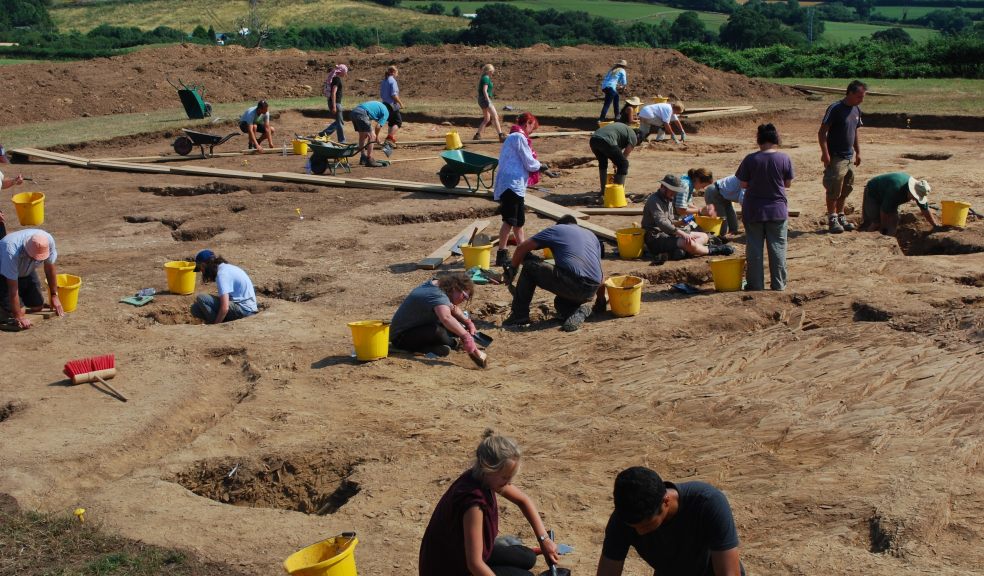 An opportunity to experience the unfolding excavations at the largest Roman village ever found in Devon is open to members of the public on Sunday 18 August, at the site near Ipplepen in South Devon. The site is of tremendous importance and has produced excitement in the archaeological world and beyond.

The systematic excavation of the site originally began in the summer of 2012.  Previously unknown, the Romano-British site was discovered as a result of metal detected Roman coin found by Mr. Phillip Wills and Mr Dennis Hewings which was recorded with the Portable Antiquities Scheme. A subsequent geophysical survey and trial excavations in 2011 confirmed that there were many archaeological features lying below the ground over an area of over 23 acres.

The findings revealed a Roman road, a square enclosure ditch of Roman date, and several round houses occupied during the Iron Age. Many fragments of pottery including locally-produced and imported wares such as amphorae from Spain and decorated Samian ware were recovered, along with more coins dating to the Roman period. Bronze Age pottery and flint flakes give evidence of human activity on site since the earlier prehistory.

The excavation team including over 70 volunteers from the Ipplepen Local History Group, Portable Antiquities Scheme, University of Exeter students and staff from Archaeology and Ancient History are trying to assess the extent, level of preservation, and the period of time when this site was in use.  The current research programme will significantly contribute to our understanding of life in Britain on the edges of the Roman Empire.

University of Exeter archaeologist and lead on the project, Dr Ioana Oltean said: “This site is the only large aggregated settlement in this rural part of Roman Britain. Previous to its discovery it was thought that everybody outside Isca Dumnoniorum (Roman Exeter) was living in isolated farmsteads and without much contact with the Roman army or colonists. Ipplepen proves that this was not the case.”

As part of a four week field excavation programme, the Archaeology students’ goal will be to find out more about the full extent and function of the site and determine for how long it was in use.

She added: “The students get to improve their skills and get an opportunity to interact with the wider public who share their passion for archaeology, and with local employers and specialists from nationally renowned institutions like British Museum. In addition, through opening access to our research to a wide range of public from Ipplepen, Devon and beyond either directly on site, or via the internet, we offer new opportunities to connect with the past.”

Devon County Council’s Cabinet Member responsible for Communities, Councillor Roger Croad said:“This is a great opportunity for the public to see Roman history of worldwide interest on their doorstep.  It give us a very real sense of how life then was like beyond the Roman city of Exeter, which is of significant historical value.“

Councillor Alistair Dewhirst said: “We welcome the University of Exeter to Ipplepen to continue their exploration of this very significant site which is constantly shedding new light on how our ancestors lived and worked here thousands of years ago. The University has worked with the Ipplepen History Society to ensure that villagers have the opportunity to actually take part in the dig. It has also set up a drop-in Information Centre at the Community Hub where anyone can follow the progress being made on site, and see any new finds while enjoying a cup of coffee and delicious homemade cake.”