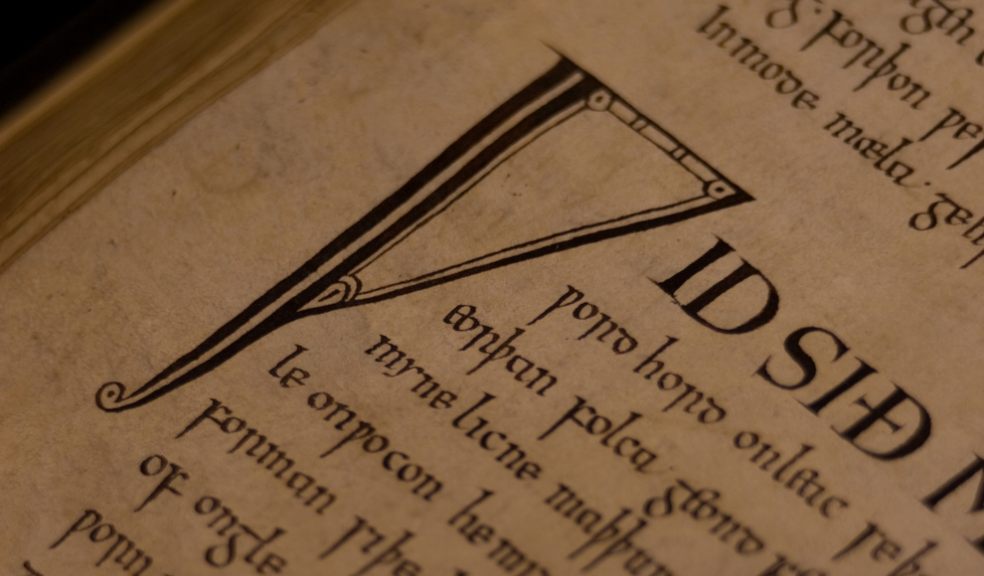 One of the oldest books of English literature in the world - created more than 1,000 years ago - is now available for anyone to browse online for the first time.

The Exeter Book is one of the four most significant verse manuscripts to survive from the Anglo-Saxon period and contains the vast majority of all surviving Old English poetry. Its origins are a mystery.

The new website and digital technology gives a fascinating glimpse into the production of the book, allowing people to explore doodles made a century ago of people and even an angel.

Experts from the University of Exeter’s Digital Humanities Lab and Exeter Cathedral have collaborated to create the new website. Their work, supported by a generous grant from the University’s Provost’s Fund, means high resolution images have been captured of each one of the Exeter Book’s 130-odd pages for the first time.

The digital Exeter Book will be an exceptional resource and tool for researchers, teachers and students of English literature, and provides a chance for anyone to in close-up one of the rarest and most remarkable relics of the medieval past.

For Ann Barwood, Canon Librarian of Exeter Cathedral and Honorary Associate Research Fellow at the University of Exeter, the new digital resource is a solution to a centuries-old dilemma:

“Of our many historical treasures, the Exeter Book has been the jewel in the crown of Exeter Cathedral for nearly a thousand years. It’s a vitally important piece of heritage for the whole of the English-speaking world.

“But caring for the oldest surviving book of English literature is, of course, a huge responsibility. The Cathedral’s challenge has always been to keep it safe, while also finding ways to share it with the world.

“So we’re delighted that this new online resource from the University of Exeter will enable everyone, throughout the world, to study this fascinating book at their leisure, and we hope, help to inspire the next generation of historians.”

The doodles - drypoint illustrations found in the margins of the book - are almost invisible to the naked eye. Very high resolution digital photography means the inkless drawings can be seen in detail for the first time. This has allowed University of Exeter experts to confirm they were made soon after it was produced, and the authorship and design of the Exeter Book took place in a workshop.

The style of the doodles, as well as clues such as the type of clothing worn by the characters show they are Anglo Saxon. This corrects previous assumptions that they were made many years later.

Professor James Clark, from the University of Exeter, who has led the research, said: “We now know the pictures are very much part of the Exeter Book’s Anglo Saxon history. In fact, they may point even to its pre-history, because they may have already been present on the parchment when it was taken to be made into a collection of poetry. They are a reminder that the stories of the Anglo-Saxons were not only written down, they were spoken, performed and visualised.

“These drypoint images – made with a pen nib or fine wooden point but no ink – have become like an etching. They are only visible under very bright light, and high resolution imaging shows them clearly for the first time. We think these drawings would have been more visible when the book was newer, but grease and discolouration have made them harder to see.

“The Exeter Book arrived in Exeter 1,000 years ago but hasn’t left the city since. But the drawings suggest that before that time the book had a much more active life, perhaps passed from reader to reader, some of who may have added to the drypoint drawings. It is noticeable how some of the figures are drawn more formally than others.”

The Exeter Book is one of four manuscript books which together preserve almost all the English literature to survive from the age of the Anglo-Saxons. As a group they form the cornerstones of English cultural history, to be counted alongside the first folio edition of William Shakespeare (1623) as the foremost artefacts of English Literature. The book is more than a thousand years old and it has been in the care of Exeter Cathedral since soon after the Norman Conquest (1066). In 2016 it was added to the UNESCO Memory of the World Register of heritage of outstanding global significance.

It contains more than thirty poems on a remarkable range of subjects from the life of Christ to the Pharaohs of Egypt, seafaring and travel, marriage, death and the immortality of the soul, and a menagerie of animals and birds some real and some known only by legend. It also includes almost 100 riddles written to test and entertain the reader, some of them with quit startling double-entendres.

Professor Clark said: “It is a privilege to be able to explore the history of his extraordinary book, and also help make it more accessible to the people of Exeter and Devon and beyond. The Exeter Book belongs to them and is part of their heritage.”

The Exeter Book was made between 960–80 in South-West England, possibly in Crediton, Glastonbury or Christ Church, Canterbury. In the 11th century it seems to have been acquired for Exeter Cathedral by Bishop Leofric, who died in 1072, and still belongs to the Dean and Chapter of Exeter Cathedral.