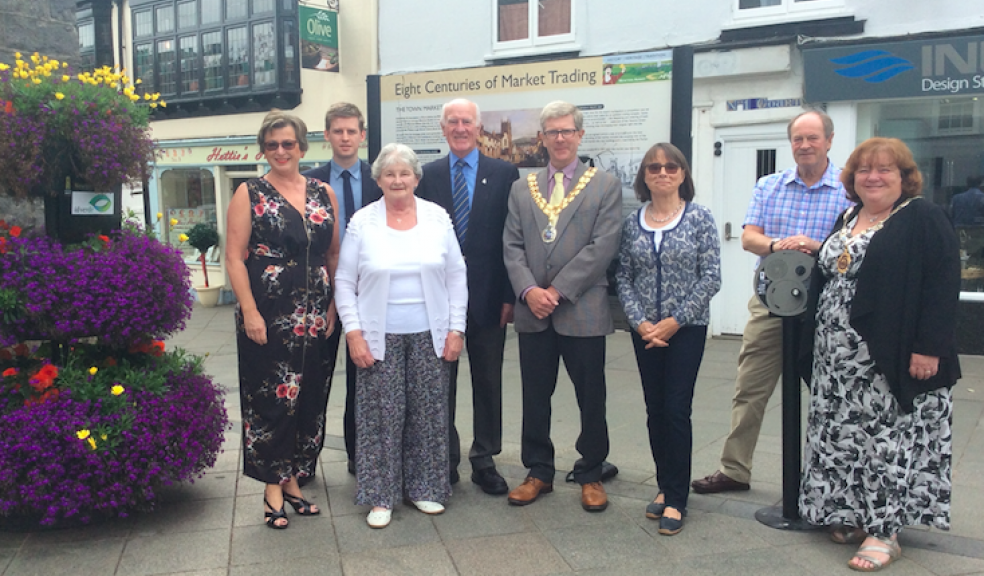 Visitors to Newton Abbot can now listen and learn about significant events in the town’s history through new, energy efficient heritage posts.

Positioned by places of historical interest at St. Leonards Tower, one of Newton Abbot’s most recognisable landmarks, Passmore Edwards Library and Courtenay Park, opposite the town’s railway station, the three heritage posts came about through a partnership between Teignbridge District Council, Newton Abbot Town Council and Newton Abbot Museum.

A first of their kind for Teignbridge, the posts are operated by selecting one of a total of eight audio clips using the dial and turning the handle until the clip begins. The posts generate and store kinetic energy from turning the handle, meaning they are also energy efficient through no connection to a fixed power source.

For added realism, many of the audio clips have been taken from interviews by local people who lived through significant historical events in Newton Abbot, including World War 2. Figures show that within just a month of being added there have been over 2000 listens across the three sites, with Green Flag award winning Courtenay Park proving the most popular.

The project was part of a wider drive to invest in the cultural and history of the town and promote Newton Abbot as a great place to visit. The heritage posts were secured through a grant from the Coastal Communities Fund (CCF) to meet commitments set out in the Newton Abbot Coastal Communities Team Economic Plan 2016. The £10,000 CCF grant has previously funded a promotional video for Newton Abbot, which has been seen over 5,000 times on YouTube.

Cllr Tim Golder, Teignbridge District Council’s Chairman said: “I was delighted to be invited along to the official launch of these new heritage posts and meet those involved with this project. Any work that encourages people to visit Newton Abbot is worth celebrating and having seen the posts in action I would encourage locals and visitors to give them a listen. Whether young or old, there’s lots to learn about Newton Abbot and through the local voices used this adds a special touch to help bring the town’s proud history alive.”

Cllr Doug Hellier Laing, Teignbridge District Council’s executive for economy, skills and tourism, and representing the Coastal Community team said: “It’s fantastic to see that funds from this project have been allocated towards these heritage posts. Newton Abbot has a rich and proud history, which these heritage posts present in a new and engaging way. Thank you to everyone involved with this project and delivering something unique to encourage more visitors to the town. Come on down and listen for yourself as you’ll be surprised at what there is to learn.”

Sally Henley, Newton Abbot Town Development Manager said: “Newton Abbot is an ancient market town with some amazing history and it’s wonderful to have more means of conveying this to residents and visitors. The existing interpretation boards around the clock tower always have groups of people reading them and the listening posts are a delightfully novel way to hear as well as read about local historical colour! They are also a fun way to engage younger visitors with our town.”

Katy Bennie from Newton Abbot Museum said: “It’s great to hear local voices and extracts collected from the museum being made available in a new and exciting way. By using these oral accounts this really brings history to life and I hope it will encourage more people to visit the town and museum.”

Despite the posts being intended for people to learn about the town through new experience and people who have lived there, they have unfortunately been subjected to criminal damage which has meant the need for repair work and reinstatement.

Cllr Doug Hellier Laing, Teignbridge District Council’s executive for economy, skills and tourism said: “This is extremely disappointing considering the time, cost and resources to have them installed across the town for people to enjoy and engage with. Teignbridge officers are working with the police and local traders to catch the perpetrators and we would ask if anyone spots anything suspicious or has information to contact economyandassets@teignbridge.gov.uk or call 01626 215485."