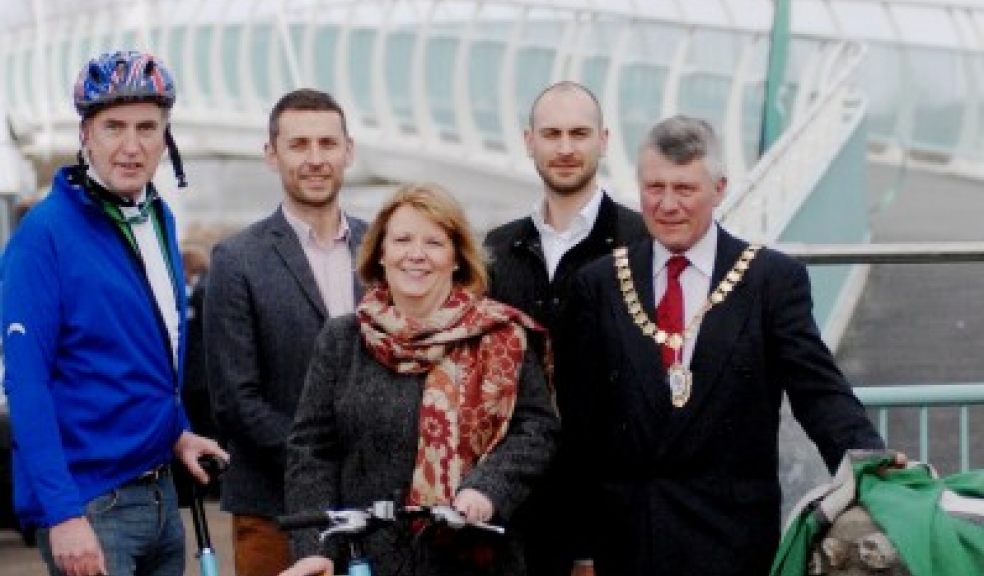 Almost 3,000 cycling trips have been made over the bridge since it opened to the public just under a month ago, with 1,300 of those in the first week.

The route, with Town Quay Bridge as its centrepiece, has cost around £3 million in total. The scheme has been funded by Devon Council Council with a £500,000 contribution from Sustrans, as part of the charity’s Connect 2 project to create new cycling and walking links across the UK with funding from the Big Lottery.

Councillor Brook said: “Local businesses can benefit from this new trail, not only because it will help tackle congestion, but because it will also attract visitors to the area. People travelling between Newton Abbot and Kingsteignton now have a safe, traffic-free option to cycle or walk between the two communities. Hopefully more and more people will use this route, not just for commuting or travelling to school, but also in their leisure time.”

Councillor Stuart Hughes, Devon County Council Cabinet Member for Highways and Transportation, said: “The amount of people using the trail and bridge speaks volumes and it has already highlighted its value to the local community. For anyone living in Kingsteignton, it is now much quicker and healthier to use a bike rather than a car to reach Brunel Industrial Estate or the railway station. This is another impressive addition to Devon’s growing network of routes which demonstrates that we truly are a cycling county.”

Sustrans has also provided the portrait bench and three metal figures, which were unveiled today at the viewing point alongside the bridge.  The figures depict Isambard Kingdom Brunel, who brought the South Devon Railway to Newton Abbot in 1846, Dr Ivy Williams, who was born in Newton Abbot and became England’s first female barrister in 1921, and finally a Clay Cutter, representing the Ball Clay Industry which has been a major local business for hundreds of years.

Adrian Roper, South West Regional Director of Sustrans, said: “This bridge is a true symbol of connection between neighbouring communities for active and enjoyable travel, away from traffic. Sustrans has been very pleased to work with Devon County Council on this project over the last 5 years with the help of Big Lottery funding. The bridge is the last piece in the new local network of signed cycle routes and provides an added incentive to extend that network out from Newton Abbot to the neighbouring towns of Teignmouth, Bovey Tracey, Torquay and Totnes over the coming years. Local people and visitors will experience a different perspective on the area and their travel options.”
The new section of trail links to paths which opened in 2011 and pass through Hackney Marshes local nature reserve. The long term aspiration is for the bridge to be part of a route which will eventually stretch down the Teign Estuary to the sea and up to Dartmoor via Bovey Tracey and the Wray Valley Trail; all part of the National Cycle Network.

The £1.1 million bridge has been designed by Devon County Council’s bridge engineers and it has been constructed on time and to budget by Balfour Beatty.

The scheme has been carried out with the co-operation of landowners Network Rail, Newton Abbot Racecourse, Teignbridge District Council, Newton Abbot Town Council and the Crown Estate. As part of the agreement with the racecourse, the bridge and the section of the path to Hackney Marsh Nature Reserve will be closed for a period on racing days to avoid any distraction to horses or riders during races. Signs are located on site to explain these closures.

A public celebration of cycling and walking on the new route is also being planned for Sunday 5 May with a variety of activities, walks and rides on offer. More details on the community event, which is being co-ordinated by Sustrans and Teignbridge District Council and sponsored by Devon County Council, will be announced nearer the time.