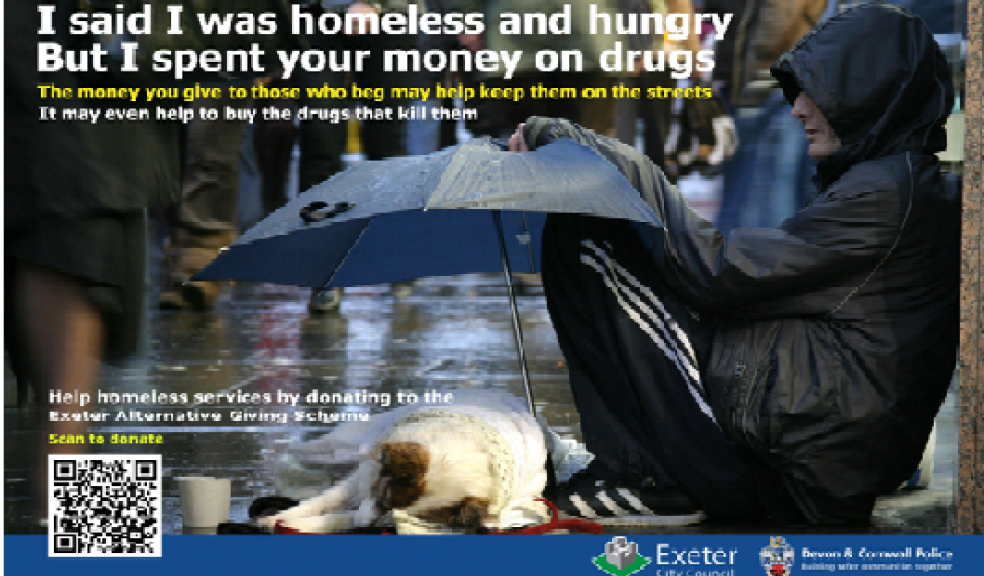 A new poster campaign has been launched to tackle begging in Exeter.

The campaign highlights the dangers of giving cash to beggars and instead promotes donations to an alternative giving scheme, providing additional funding to projects that help those in need.

The campaign, which is run by a partnership of Exeter City Council, Devon and Cornwall Police and several local drugs and homeless support agencies, also draws a link between drugs abuse and money provided by begging.

Council Leader Pete Edwards said: “We just want to get this message across that it’s better to give with alternative giving rather than supplying people with cash.

“If we don’t do something like this we are just perpetuating people’s drug addictions, they just carry on paying their dealers. We genuinely want to get them off the streets into permanent accommodation and they’ll become respected members of the public.

There are, however, concerns that the campaign may cause offence with a poster which states that money given to those begging “may even help to buy the drugs that kill them”.

Cllr Edwards said: “There is a danger of that, but we have got to get this message across.

“I think we need to have a campaign that does shock people and make them think that when they are out in town and they give money they are doing more harm than good.”

In the past posters that have sought to tackle begging in UK cities have proved controversial, with a campaign by Bristol City Council being pulled following an upheld complaint to the Advertising Standards Authority (ASA).

The ASA ruling in 2004 stated that there was no established link between drugs overdose and money from begging.

Matt Bell, the Chief Executive of Exeter Community Initiatives one of several support agencies involved with the campaign said: “I share concerns about not wanting to demonise people on the streets... they are in need, whatever that need might be.

“One of the reasons we wanted to be involved was to ensure there was a caring side to this campaign.

“We’re going to work with other homeless and drugs agencies in the city on a more positive poster to show that there is support out there and to show that these people are in need.

“There are many who go through recovery and come out the other side. It can be a long and difficult process because it is such a huge change to make in your life, but it absolutely can be done. There is positive and good work being undertaken which needs to be seen alongside the ugly side of the impact of these needs.”

Devon and Cornwall Police’s Acting Sergeant Chris Leisk said: “I want to stress, this isn’t about targeting people who are down on their luck, it’s not about targeting the homeless, it’s more about looking at the root causes of begging.

“We see on a daily basis that people beg to fund a drug addiction, an alchol addiction or some form of substance misuse. They tell us that personally.

“We need to take fairly strong action and we need the public support to tackle these root causes. By educating the public and looking at this alternative giving scheme we are trying to reduce the amount of money beggars will earn on the streets of Exeter to help them find the motivation to go get help.”

For more information on how to help with the Exeter Alternative Giving Scheme visit www.eci.org.uk/EAGSExeters-Alternative-Giving-Scheme
Or donate by SMS by messaging EXCI11 and then the amount you want to donate to 700 70.