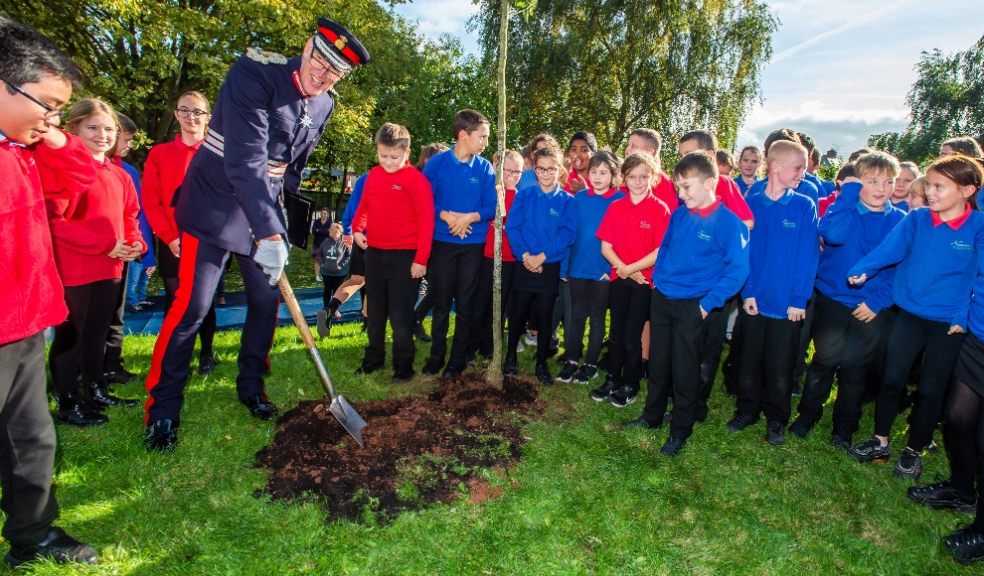 The Devon launch of a national project to mark Her Majesty’s Platinum Jubilee in 2022 took place at an Exeter primary school on Tuesday (October 12) with a ceremonial tree planting.

The tree was accepted on behalf of the school by Head Teacher Gill Brown and School Governors Peter Vickery and Poppy Daly.

The school is the first in the county (excluding Plymouth and Torbay) to be presented with a tree for the Queen’s Jubilee year.

The Queen’s Green Canopy (QGC) invites organisations and communities across the United Kingdom to “Plant a Tree for the Jubilee” during the official planting season between October and March.

The aim of the QGC is a sustainable project that will benefit future generations.

It is hoped as many people as possible will have the opportunity to plant a tree for the Queen’s Jubilee celebrations across Devon.

As well as inviting the planting of new trees, project will dedicate a network of 70 Ancient Woodlands across the United Kingdom and identify 70 Ancient Trees to celebrate Her Majesty’s 70 years of service.

Mr Fursdon said: “I am honoured to have been invited to Wynstream Primary School to present this sapling.

“When this tree matures in 20 years’ time it will be the children of the pupils here today who will be playing underneath it.

“Trees are a symbol of hope for the future and trees like this will benefit many generations to come.”

The head teacher of Wynstream Primary School, Mrs Gill Brown, said: “I want to thank the Lord Lieutenant for presenting this tree.

“I hope that trees like this will inspire the children and help them understand the importance of the natural environment as they will be the future custodians of our green spaces, forests and woodlands.”