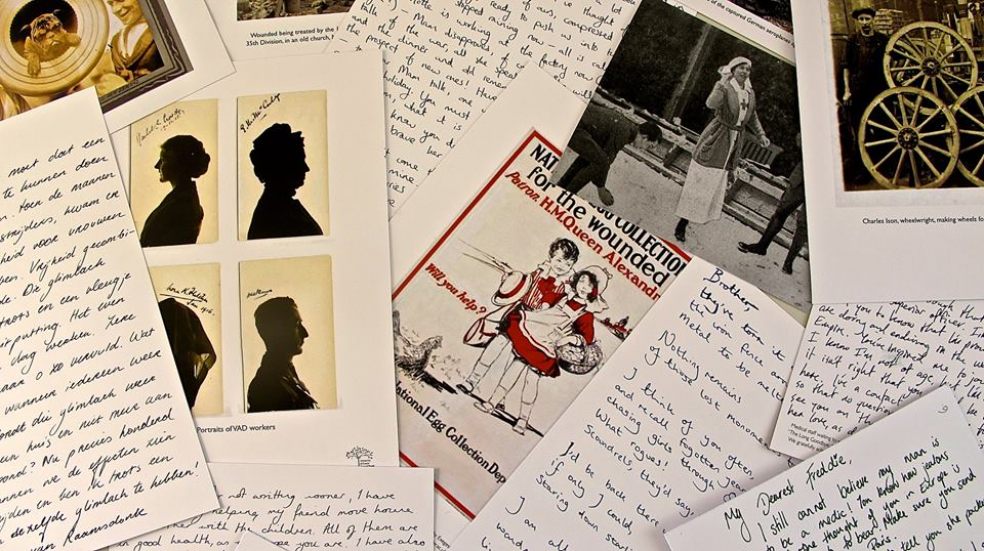 Hundreds of postcards have been written to those affected by the outbreak of the First World War from people today, as a form of memorial and recognition.

These letters are not only to the soldiers, medics and the war horses that served, but also to the millions of civilians who remained at home and contributed to the war effort.

As part of a University of Exeter engagement project, The Long Goodbye: a conversation across a century has encouraged members of the public and students to write postcards to those living at the time of the Great War. The aim is to address the lives lived, rather than only the lives lost.

On Monday 4 August to mark the anniversary of first day of the Great War, an installation of hundreds of handwritten cards will be hung throughout he gardens of Reed Hall at the University, and down towards St David’s train station, the point of departure a century ago.

Photographs of women in munition factories, knitting for refugees, Chinese Labour Corps, orphans receiving food from Quaker soup kitchens, the sphagnum moss pickers on Dartmoor whose collections made bandages to the pigeon fanciers who became part of the signal corps are some of the many images on the postcards. These are in addition to those of soldiers, sailors and airmen from across the British Empire at the Front.

Members of the public have been encouraged to select a card to either write to relatives or to those in the pictures, using an old fashioned dip pen and ink which would have been used 100 years ago. School children have been involved in workshops and were often intrigued by dipping a pen into an ink pot to write with.

Seven-year-old Sullivan, from Exeter wrote to his great, great grandfather Thomas Marshal Curry, a Lance Corporal in 'A' Company, 10th Battalion Royal Inniskilling Fusiliers. He didn’t return from the war and died in 1916. The postcard read: "Dear Thomas, it must have been hard to leave your family and go to fight in the 1 World War. Sorry your sad, but you have a very important job, thank you for your work – were any of your friends out there? Love your great, great grandson Sullivan."

His aunt, Victoria Curry found out more about their distant relative as a result of being involved in the project, which also got the wider family swapping tales. Victoria said: “It’s been a wonderful learning experience. Not just finding out about the many different roles that so many people undertook in that period of our history but, being inspired to further research my great grandfather and get a picture of what he and his family went through at that time. He has been introduced to younger members of the family and put into their consciousness, to hopefully be talked about by another generation which will keep his memory alive and relevant."

Suzanne Steele, an official Canadian war artist (Afghanistan 2009), a PhD student the University of Exeter on the literature of the First World War is leading The Long Goodbye project. She explained: “We have been are asking people to write from 2014 to 1914 and the focus is not on the deaths of people who served, but rather, their lives​ especially from the perspective of 1914. In other words, we are not focussing on the tragedy of war, but the participatory citizenship, the massive engagement of over 800 million people and animals worldwide. This includes the children picking blackberries for soldier jam, the conscientious objector who joins an ambulance corps or who builds shelters for some of the 4 million refugees flooding France and Britain to the 12 year old boy who has to work the pit ponies in the mines because all the men in the village are leaving.”

The cards are being scanned to form an online archive with the text and images of the hundreds of postcards. This allows the project to have a longer life, a legacy that enables people who have contributed to see their postcard in amongst the many others and their reflections on the impact of the Great War. An international element has involved students and visitors from Botswana, China, India, Palestine, Greece, Turkey, Kazhikstan, Germany, France, Canada and Saudi Arabia who have written in their own languages (translations online) to provide a truly global feel to what was a world war.

She added:“Part of this project is to clear some of the myths away, for example, almost 90% of those who left came home. For some of the 80% of military age men who were living in urban poverty, the war meant their first pair of new boots, a bed to themselves, food and a pay cheque. Highly paid yet extremely dangerous jobs in munitions factories were available to servants, which provided independence for many women and their families.”

The event on the 4 August starts at 5 to 7pm in Reed Hall will be opened by the Lord Mayor of Exeter. There will be a recital of WW1 poetry, including a reading by Richard Perceval Graves, nephew and biographer of war poet Robert Graves. Live music will prevail and further readings from a selection of the hundreds of postcards which will be swinging from the trees as part of the outdoor installation.

For more information about the project visit http://thelonggoodbye.exeter.ac.uk/