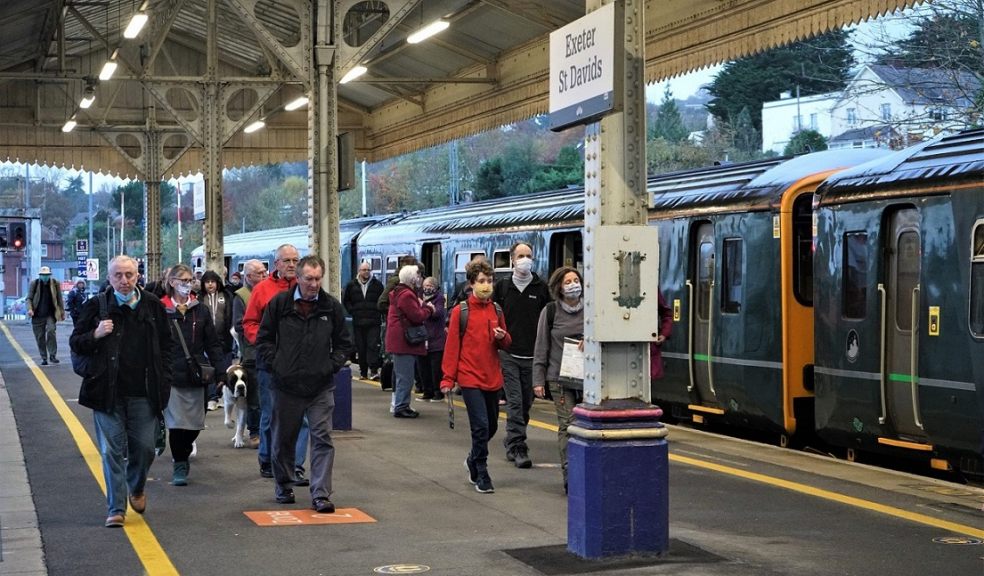 Over the past seven years 8 significant improvements have been made to the rail infrastructure and facilities in the Exeter area, on the whole leading to better train services for the whole community.

Firstly, the introduction of newer rolling stock with the phasing out of the old Class 140 and 142 diesel units and replacement with Class 150/2s, 158s and 159s. These are now in regular use on the branch lines in and around the city.

In addition, some former 7/8 carriage HST sets have been transformed into shorter units, often running regional routes such as Cardiff – Penzance via Exeter St. David’s.

The advent of brand new Inter City Express Trains (Class 800) from London and the SouthWest in 2017 has also brought greater train capacity and shorter journey times.

Second, the opening of Newcourt station on the Exmouth (Avocet) line in June 2015. This was part of the evolving ‘Devon Metro’ initiative promoted by Devon County Council and other partners. It serves thousands of people from the new housing developments in that area, and also around Sandy Park, with almost 100,000 annual passenger journeys before the COVID emergency.

Number three: over two years late, Cranbrook station was finally opened in December 2015, being used by over one hundred passengers in 2018. This is a key element of the public services for the growing new town still being built to the east of Exeter.

Fourthly, the reopening of the old ticket hall at Exeter Central has been an aesthetical and practical success. Its 3 ticket desks provide a friendly face to travellers, and the Ticket Vending Machines considerably speed up the purchasing process. Information points are helpful in this refurbished 1930’s old entrance, complete with its former wall tiles and window arches.

Next, in 2019-2020 the St. James’ Park station platforms were modernised and lengthened, much improving access, safety and train boarding. With most trains stopping here now having 4 carriages this means passengers no longer have to ensure they’re in the correct part of their train!

The sixth major change in 2020 saw the introduction of 2 trains per hour (2tph) from Paignton to Exeter, a doubling of the previous service, and most trains run between Exmouth and Paignton - reversing at St. David’s. Consequently, all stations along this route enjoy an upgraded frequency as well as longer trains which have reduced overcrowding.

Seventh is the new Exeter Train Maintenance Depot (TMD) which was eventually fully opened at St. David’s in 2021. This provides stabling, cleaning, fuelling and repair facilities for 31 diesel multiple units, plus visiting sets. The depot is operated by Great Western Railway and has three roads. It is located behind the station on the site of the 1844 locomotive engine shed.

Finally, the most recent addition to Devon’s railways is the much-publicised re-opening of the Dartmoor Line from Exeter to Okehampton, via Crediton and Newton St. Cyre’s. Shut down for passenger rail use in 1971, the Southern Railway station building and tracks have been maintained by a heritage company and community rail groups. It was opened on 20th November 2021 following track renewal and restoration funded by £40m from the government’s ‘Restoring Your Railways’ initiative. Public money has enabled this exciting project to become a reality with regular daily services now linking the moor town with the city once again.

So, what further eight changes and advancements can we expect in the next 7 years, particularly if the new ‘Great British Railways’ gains momentum and the 'Devon Metro' becomes more of a reality?

Work is to take place to improve the Dartmoor Line further to allow for an hourly frequency with more trains operating to and from Exeter Central.

Already Exeter’s tenth train station is under construction. Marsh Barton is expected to be open for public service from July 2022, and will open up an area of industrial, business, leisure and residential uses currently not practically served by the railway.

There has been a campaign to construct another new Avocet Line station at Hill Barton/Monkerton (near the Met Office), and plans are advancing for studies on the re-opening of Cullompton and Wellington (Somerset) stations, between Exeter and Taunton.

New track is desperately required between Exeter and Honiton/Axminster for East Devon Line trains. The aspiration for a half hourly (2tph) frequency from Pinhoe and Cranbrook and elsewhere into Exeter needs to be resourced. New housing needs better transport and the railway here is so under-utilised.

Cyclists continue to be given limited train access, so it would be such a positive step to see more space in train given over to bike storage. Bikes on Trains is such an important way forward for greener, active travel, and train companies must respond to this need. For example, the potential of combining rail and riding from Okehampton or along the Exe Estuary is immense, and a particular win-win situation for commuters, visitors, tourists and young people.

The travel demand on Exeter Central station has grown considerably in recent years. The pressure on the station is substantial, so consideration should be given to two-way running on Platform 3, and the reinstatement of track and a new island platform on the old through lines. This would give better access to trains from the west, including Okehampton and Cullompton.

The eighth enhancement would be a major upgrade of the line to Exmouth, with new passing loops for a 4 train per hour service, and a new more accessible station at Polsloe Bridge, re-sited to the north west of the existing position. The line is heavily used by students, shoppers, tourists, commuters, sports fans and day trippers, and, although a more ambitious development, this could make a significant difference to so many people and the environment in the lower Exe Valley.

With these kinds of developments, the city’s rail future is looking healthier than it has perhaps ever been. Much of this is due to local people -communities, councils, politicians and businesses calling for modern trains, new stations and better infrastructure for all. May all that continue healthily in the coming years…

This item was originally posted on the Facebook page of Exeter Rail Network, 22nd November 2021