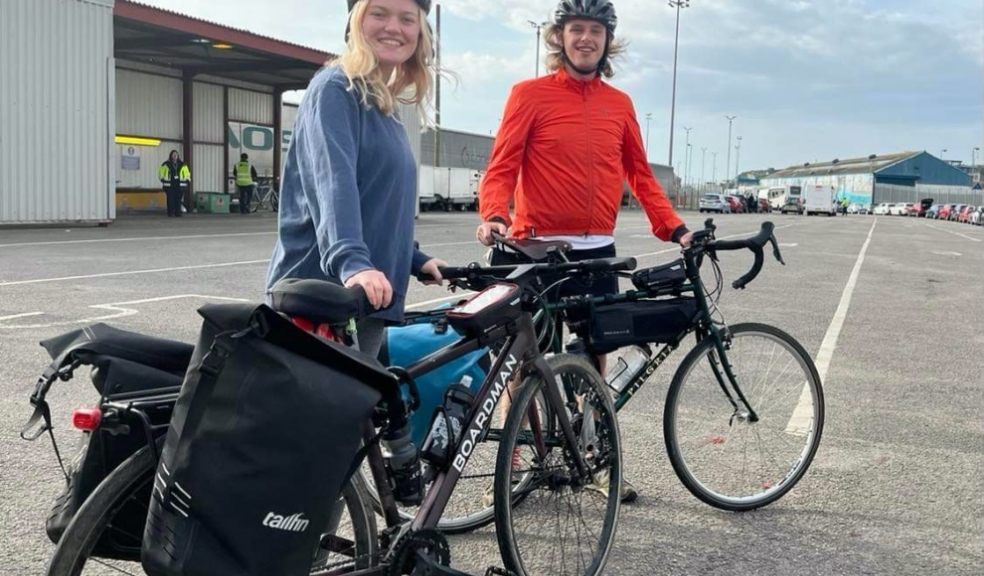 Two University of Exeter students have set off on an epic 2,000 mile sponsored bike ride to Greece.

Jeremy Daubeny and Lottie Hinton have embarked on the 10-week trip to raise money for the Brain Tumour Charity and Motor Neurone Disease Association.

Last year, Jeremy, who is in his second year of studying for an Economics and Politics degree, raised £37,500 cycling around the UK to support two charities that helped him when he lost his mum and dad.

Typical life for the 20-year-old ended when his mother Clare first became ill with motor neurone disease (MND) when he was just 15.

In their memory, Jeremy and his sister Jessica last year cycled across the UK in search of the best English breakfast.

The “Tour de Full English” raised £37,500 for charity and led to Jeremy receiving a Pride of Britain Award nomination as well as being named ITV Meridian Fundraiser of the Year.

Now Jeremy, from Tunbridge Wells, will be joined by fellow Exeter student Lottie, who is studying for a French and English degree.

They have brought a tent with them and plan to spend the trip camping or sofa-surfing before returning in 10 weeks.

Jeremy said: “I think it’s going to be a big challenge, especially in terms of the changing conditions. As we get into the Balkans the heat will probably be approaching 40C so we’ll be getting up at 4am and trying to finish by 11am each day. I expect the further east we get the terrain will get slowly worse, but we’re going to take it day by day and see how it goes.”

The loss of both his parents in such a short space of time made Jeremy determined to fundraise in their memory, and his newly discovered lockdown hobby of cycling provided the perfect inspiration.

“The bike tour all began on my gap year, when I couldn’t travel because of Covid. I got bored waiting, and got thinking on my bike rides around where I live and the idea was born,” he said last year.

Jeremy has joined the Fundraising Society, Cycling Club and Expedition Society since becoming a University of Exeter student and is a young ambassador for both for the Brain Tumour Charity and Motor Neurone Disease Association.

He says fundraising has influenced his future career ambitions, describing it as a “dream” to one day work for a charity he’s passionate about in a policy role.

Follow Jeremy and Lottie’s progress at instagram.com/tourdefullenglish and donate via their fundraising page: peoplesfundraising.com/donation/greecebound