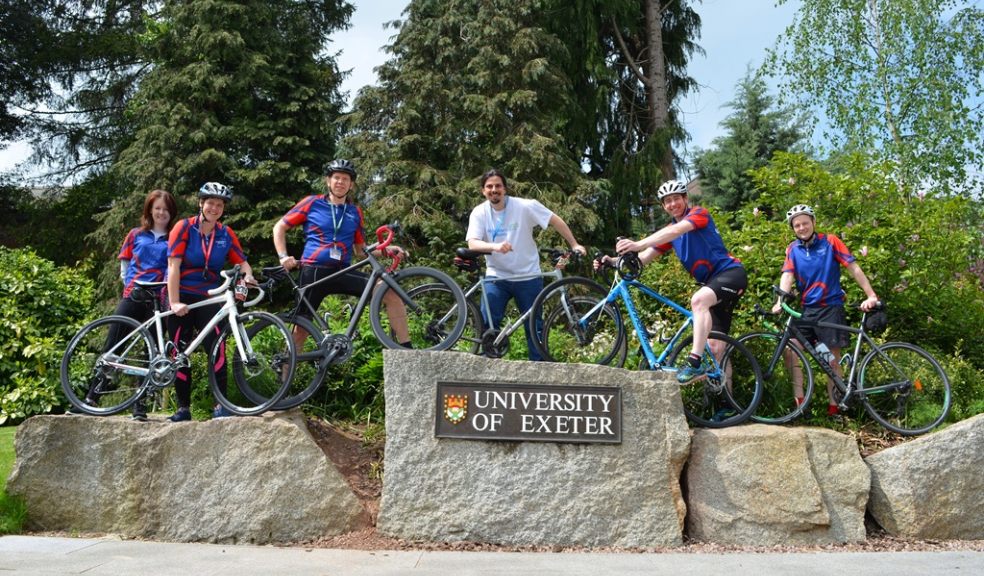 A team of six passionate dementia researchers from the University of Exeter are uniting against dementia and cycling 350 miles from London to Paris in a bid to raise £12,000 for the charity Alzheimer’s Society.

The team will embark on their challenge on 19 July this year with a view to arriving in Paris, and crossing the Tour de France finish on the Champs D'Elysee, four days later.

Most of the team were not regular cyclists – but they are now building up to take on a gruelling 100 miles per day in the saddle for four days straight, to raise money for a cause close to all their hearts.

Professor Andy Randall, one of the team, said: “Except the odd mile or three to and from work most of us are not regular cyclists and up to 100 miles (160 km) a day in the saddle is certainly not something most of us have done.

“Dementia represents a major healthcare issue around the world. Unless we can do something about it its impact is set to grow considerably in the coming decades.”

Dementia is caused when the brain is damaged by diseases, such as Alzheimer's disease or a series of strokes. Dementia is set to be the 21st century’s biggest killer, with someone developing it every three minutes and too many facing it alone. Alzheimer’s Society is urging everyone to unite against dementia.

Professor Randall continues: “Dementia can be very distressing for patients as well as their family and carers. Our team know from personal experience that Alzheimer's Society is a fantastic organisation. It supports families affected by dementia and funds important research in laboratories throughout the UK. Their website is well worth a visit to see what they do with the money they raise.”

Some of the academics have had a particularly rough ride during training.  Professor Jonathan Mill has twice fallen off his bike – once having to dive into a muddy ditch to avoid a lorry in Scotland. He said: “It’s fair to say that I’m more at home with sequencing DNA than I am on pedals, but I’m persevering,” he said. “Dementia really is a global health crisis, so I’m prepared to ensure a few cuts and bruises to raise money for such a great cause.”

Dementia is one of the University of Exeter’s key research focus areas, with outstanding research quality and a growing body of internationally-renowned academics.

All the team has received support from Alzheimer’s Society over recent years for their ground-breaking dementia research.

Professor Jonathan Mill and Dr Eilis Hannon are internationally regarded for their work into the genomic factors underpinning dementia risk. Dr David Llewellyn works on lifestyle risk factors in dementia including the role of Vitamin D, and is also working on improving diagnostic methods.

Meanwhile Professor Andy Randall directs Exeter's Alzheimer's Society supported Doctoral Training Centre which is supported by the Garfield Weston foundation. This is currently supporting the PhD training of eight young dementia researchers of the future, and all of the team are involved in supervising one or more of these students.

A message on the team’s fundraising page notes: “The funds we raise will allow Alzheimer's Society to continue supporting the best cutting-edge research into dementia around the UK.

“We are fundraising as a team rather than individuals, so please support us. Any amount will be greatly appreciated and go towards understanding the causes and consequences of this devastating disease.”

You can support the team’s fundraising via their JustGiving page: https://www.justgiving.com/fundraising/ExeterDementiaResearchers

Dr Doug Brown, Director of Research and Development at Alzheimer’s Society said: “Alzheimer’s Society funds research into the cause, care, cure and prevention of all types of dementia and has committed to spend at least £150 million on research over the next decade. We are very grateful to the team for their fantastic support.

“Not only are they hoping to raise an incredible amount of money but they are also doing fantastic research to help us understand, treat and ultimately cure dementia. They are also working hard to inspire and train the next generation of dementia scientists. Fundraising efforts like these are essential to increase our capacity for dementia research.”

Alzheimer’s Society is urging everyone to come together and unite against dementia. Find out more about dementia research by visiting alzheimers.org.uk/research

To read more about dementia research at the University of Exeter visit: www.exeter.ac.uk/dementia/