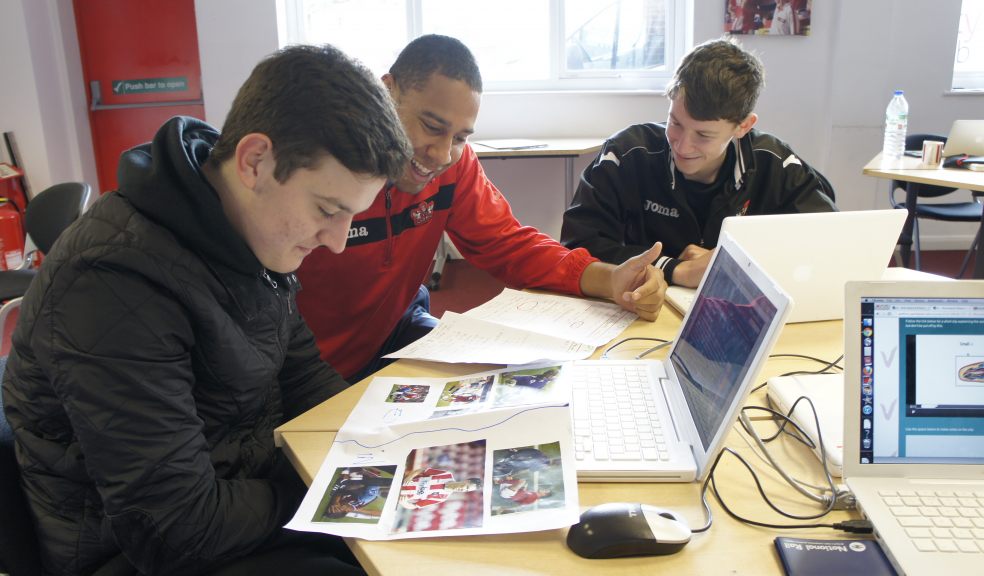 For some youngsters, their experience of school can put them off the idea of further education after GCSEs altogether - even if they have the ability to progress their academic studies.

Now Exeter City FC is offering an exciting new opportunity for 16 and 17 year olds - male and female - to pursue a Futsal and Education scholarship with the club, allowing youngsters to study a Level 3 BTEC diploma as well as playing futsal.

The club is aiming to encourage youngsters to remain engaged with education by running this fully accredited Level 3 BTEC National Extended Diploma in Sport, which is equivalent to three A Levels and opens up the possibility of a university education afterwards.

The course is based at St James' Park in the state of the art Grecian Centre, which is a non-traditional learning environment within the football stadium.  It offers a bright and airy study room, complete with Apple Mac laptops and a variety of digital equipment to aid learning in unique, non-classroom ways.

Throughout the scholarship programme students will have the opportunity to earn qualifications that will help them gain employment in the sport and leisure industry, as well as training and competing in a professional futsal environment for Exeter City FC against other clubs from the Football League.

For more information about this groundbreaking course. please contact Jamie Vittles on 07711 331452 or email jamie.vittles@exetercityfc.co.uk

WHAT IS THE COURSE?

● The course is a Level 3 BTEC National Extended Diploma in Sport - equivalent to 3 A Levels.

● 8 hours of education per week.

● 6 hours of futsal per week, including training and fixtures.

● Available to male and female students aged 16 or 17 who have just achieved their GCSEs and those who are not in education, employment or training (NEET).

● Entry requirements are four GCSEs or equivalent at C grade or above.

● The BTEC is equivalent to three A Levels - offering possible university or foundation degrees.

● Work experience and employment opportunities in the sport and leisure industry.

● The opportunity of becoming a futsal player and play in the FA Futsal National League.

● Fixtures against other Football League clubs such as Cardiff City, Portsmouth and Southampton.

Futsal is an exciting, fast-paced five-a-side game that is played all over the world and is officially recognised by both UEFA and FIFA.

Futsal is played on a hard-surface pitch with hockey sized goals and a size 4 ball with a reduced bounce. Games are 40 minutes long, played to a stopping clock (like basketball) with time-outs allowed.

Many of the world’s top footballers played futsal in their youth and credit it with supporting their footballing development, such as Lionel Messi, Xavi, Cesc Fabregas and Cristiano Ronaldo