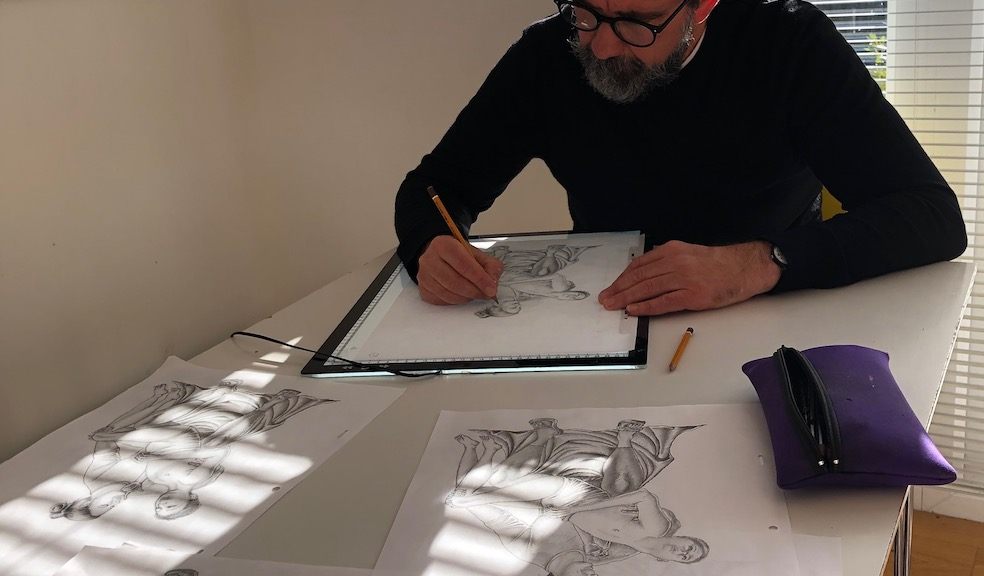 He's created a hand-drawn animation of an unpaid carer from Exeter which will be projected onto the Exeter Phoenix after dark in late October. The two-storey high projection will celebrate the millions who work around the clock caring for family and friends at home. Research shows their role has been made even harder by the closure of support services during the COVID crisis.

A second animation featuring an unpaid carer from London will be projected onto Peckham Library a few days later.

The imposing installations aim to give recognition to the growing army of unpaid carers whose work saves the government £132 billion a year - quite literally shining a light on those who provide ongoing care for family members and friends with long-term illnesses and disabilities.

Across the UK, the invisible labour of nine million unpaid carers is the equivalent of a second NHS. Their caring roles became even more challenging at the start of the pandemic when most respite and support services came to an abrupt end, and the increased responsibility has continued to take a toll as services remain closed or operate with reduced capacity. An extra 4.5 million people are also estimated to have become carers during the pandemic.

Dr Siobhan O’Dwyer from the University of Exeter led Caring through Coronavirus, a longitudinal study of carers’ experiences during the first year of the pandemic. It was conducted in collaboration with researchers from Cardiff University, Loughborough University, Bournemouth University, and the University of Southern Denmark, and funded by the Strategic Priorities Fund.

Dr O’Dwyer says, “Unpaid carers are the invisible scaffolding holding up the NHS and social care in the UK. Despite this, they have been largely ignored in discussions about, and responses to, the pandemic. Our research has helped policymakers and social care providers realise the significant impact of the pandemic on carers, but now we want to engage the wider community and we hope Leo’s art will be a powerful way of doing that.”

Inspired by this research, artist Leo Jamelli - who helped care for his father for five years after he suffered a severe stroke - aims to create a ‘window into the world of carers’. Leo says, “I want my animations to portray the positive aspects of caring for people, as well as the challenges. The artwork for the Exeter animation is based on Julia, a mother from the South West, who cares for her profoundly disabled 14-year-old son Harrison. It captures a small moment in their day when she is cradling Harrison and smiling at him before she puts him to bed. It’s important to all of us involved in this project that we celebrate the role of carers, as well as shining a light on their growing needs.”

Julia says she had no qualms about this intimate moment in her daily ritual being shared in a public space: “It felt completely right for me because that is how I hold my son every night. People have sympathetic thoughts when they see you pushing your child in a wheelchair, but I don’t need sympathy for that. My son is who he is, he’s an absolute joy, I love him and I’m thankful to have him. But what I would like people’s understanding for is the sheer physical and mental toll of caring for a child like Harrison. I hope Leo’s work makes people stop for a moment and consider the full impact of the caring role.”

Archaeologist Dr Catriona McKenzie, an expert in public engagement, says, “This is the second time we’ve worked with Leo. In 2019 he created The Invisible Carer, in response to archaeological research on family care. Leo’s personal experiences of care are evident in his artwork, and this is one of the reasons why carers have been so moved by these impressive and emotive animations”.

Dr O’Dwyer adds that the outdoor, socially distanced nature of the installation should help to keep people safe: “We’re not asking people to go into an enclosed gallery space. It’s in the fresh air, so it’s safe for carers to come out and see. Even if you just spend a few moments in front of Leo’s work, it’s hard not to be moved by it. The installations will also be filmed, so anyone who can’t experience them in person can view them online.”

The project has been funded by an Arts Council England grant, with support from the University of Exeter College of Medicine & Health and the University of Exeter Arts & Culture. Sarah Campbell from Arts & Culture says, “We are thrilled to see the next iteration of Invisible Carer gaining such welcome support. The contribution of family carers to society cannot be overestimated, and it is wonderful to see their experiences recognised and appreciated so publicly. We are very much looking forward to seeing the final works in situ.”

Devon-based Stage Engage is kindly providing the equipment for all the projections at a reduced rate.