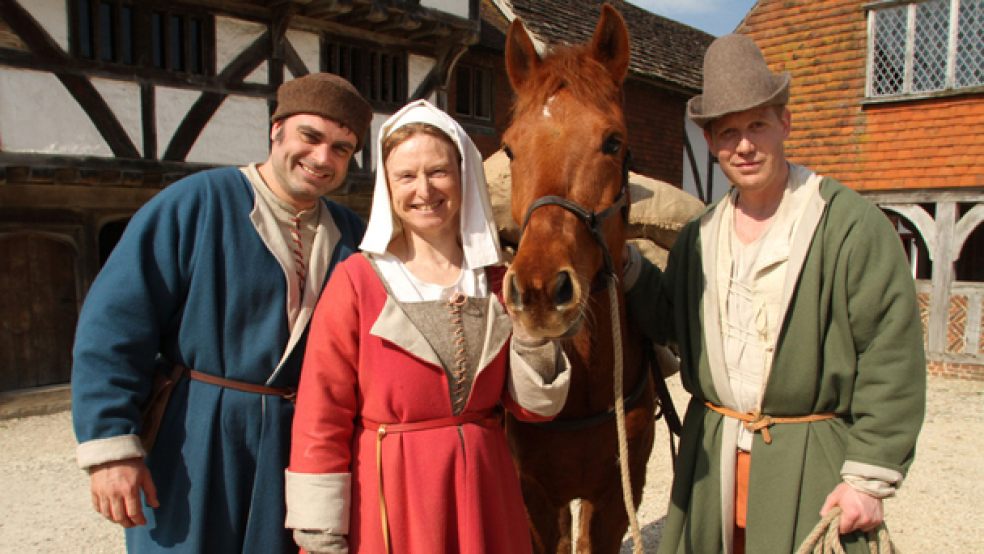 Following the long-running success of BBC Two’s living history series, Victorian, Edwardian and Wartime Farm, a new series will be exploring life at the end of the Middle Ages in Tudor Monastery Farm.  University of Exeter historian Professor James Clark was the programme consultant for the six part series in which he features onscreen as the team’s guide and mentor from the monastery, dressed in an authentic medieval habit.

The first episode of the new TV series will be broadcast on Wednesday 13 November at 9pm.

The programme will turn the clock back to the year 1500, as a team of archaeologists and historians experience the challenges of everyday life in the reign of the first Tudor monarch. It was a time of great change for the people of this country: after years of plague, famine and war, the Tudors brought peace and the prospect of a new prosperity. It also marked the end of the old, medieval order and in particular of the monasteries which for centuries had governed not only matters of religion but also many aspects of economic and social life.

Professor Clark’s research expertise in the church and cultural life of the era was essential for the series producers to ensure accuracy and authenticity.  As well as recreating everyday life, the programme explores the impact of these great medieval institutions, revealing their extraordinary influence on the landscape, buildings, craft, technology, and on the lives of ordinary people.

Today it is hard to imagine the dominance of the monasteries says Professor Clark: “We see them only as rubble ruins but in the reign of Henry VIII they were hugely powerful, not only as part of the Church establishment but as landowners, employers, key players in agriculture and in industry. In many regions where there were few towns of any size, they also provided essential services for the local population: schooling for their children, medical care for the sick and elderly, and charity for the poor. This was especially true in South West England where monasteries – Buckland, Tavistock – were the very hub of the local economy and society.”

From sheep farming and harvesting to building a Tudor clock, the team, which includes University of Exeter alumna Ruth Goodman, a specialist in Tudor domestic life, will be put through their paces to give viewers a hands-on vision of living at the end of the Middle Ages. Tackling not just a new era but also a whole new way of life, scrupulous contemporary record-keeping and the latest archaeological finds will allow the team to bring this long-forgotten world into focus and explore the whole of early Tudor-life in microcosm.

Filming in authentic medieval conditions was challenging at times, recalls Professor Clark: "Long hours in a coarse woollen habit were uncomfortable to say the least, especially during the summer heat wave, but they did give me a new, personal insight into my subject!"

The Tudor Monastery Farm was recreated on location at the Weald and Downland Open Air Museum in West Sussex.