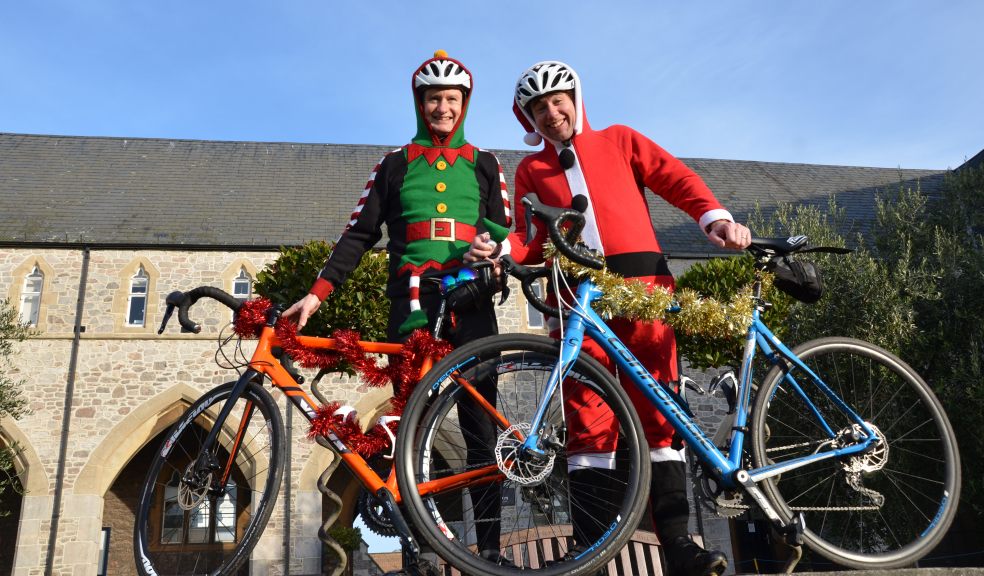 Two researchers from the University of Exeter put elf before beauty to prepare to cycle 350 miles from London to Paris for the charity Alzheimer’s Society.

Drs Mark Tarrant and David Llewellyn launched their fundraising bid in full festive style, as they burned off the mince pies through starting their training for the epic cycle challenge.

Dr Llewellyn knows how tough preparation can be. He had planned to join a team of six dementia researchers on the ride last summer – but had to withdraw after breaking his wrist when he fell off his bike during training.

Dr Llewellyn said the distance felt akin to Santa’s Christmas Eve delivery run. He said: “I know Santa puts in the miles, but at least he has reindeer – we’re pedal powered. Cycling from London to Paris was a daunting challenge in the first place, so crashing and breaking my wrist in June didn’t help. Thankfully my friend and colleague Mark has joined me as I take on the challenge again. Unlike Santa I can get away with missing a year – I’m determined to get to Paris eventually!”

Dr Tarrant said: “I’d heard cycling is good for your elf, but so far my longest distance is about 20 miles so I really have my work cut out. I hope people will get into the festive spirit and support us, as the money will go towards making a real difference in funding research into dementia – one of the world’s greatest health challenges."

The pair will embark on their four-day challenge in July 2018 arriving in Paris and crossing the Tour de France finish on the Champs D'Elysee.

Over the spring the pair will build on their training to take on a gruelling 100 miles per day in the saddle for four days straight, to raise money for a cause close to their hearts.

With someone in the UK developing dementia every three minutes, the need to unite in the fight against dementia has never been more pressing.

Dementia is one of the University of Exeter’s key research focus areas, with outstanding research quality and a growing body of internationally-renowned academics. All the team has received support from Alzheimer’s Society over recent years for their ground-breaking dementia research.

Dr Llewellyn works on lifestyle risk factors in dementia including the role of Vitamin D, and is also working on improving diagnostic methods. Dr Tarrant’s work aims to improve quality of life for people with debilitating conditions.

You can support the pair’s fundraising via Dr Tarrant’s JustGiving page: www.justgiving.com/fundraising/marktarrant91

The best gifts can’t be wrapped so whether you give an hour, a day or more, volunteer, fundraise or campaign with Alzheimer’s Society. Every action makes a difference to someone affected by dementia. Visit alzheimers.org.uk/getinvolved to find out how you can unite against dementia.

Pictured, left to right: Dr Mark Tarrant (aka the elf) and Dr David Llewellyn (aka Santa) prepare for their charity bike ride to support Alzheimer's Society