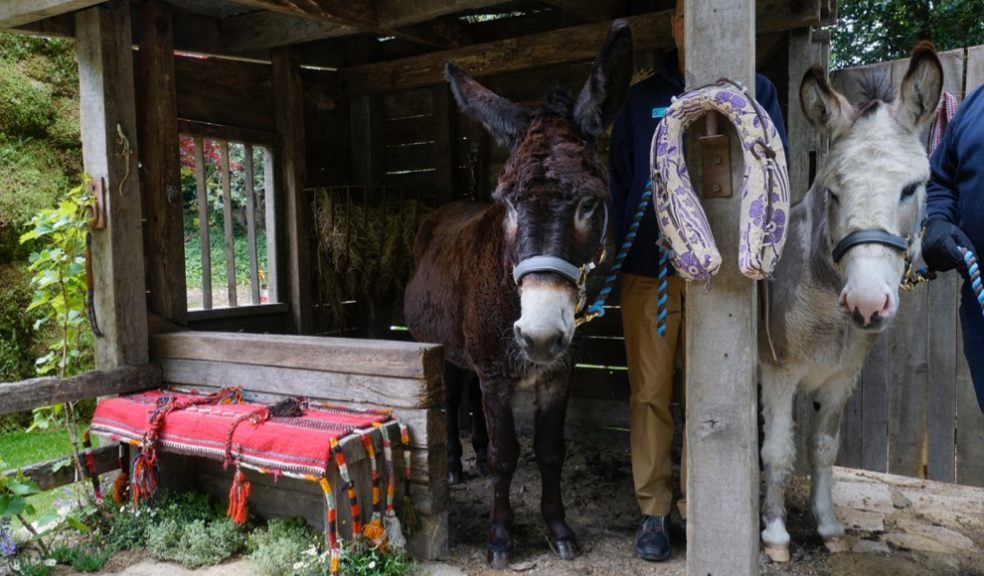 The Donkey Sanctuary has opened its Artisan Garden with a pair of donkeys at this year’s RHS Chelsea Flower Show.

Travelling from their Guardian home at Mudchute Park and Farm on the Isle of Dogs, Skooby and Harley stood calmly, demonstrating ‘Why Donkeys Matter’.

The garden marks The Donkey Sanctuary’s 50th anniversary and is designed to showcase the charity’s international work. Using water as its central theme, the garden demonstrates how owning a donkey means access to clean, fresh water for some of the poorest and most vulnerable communities in the world.

A key garden design feature is a path traversing from bottom left to top right representing the many journeys donkeys carry out on behalf of communities to support their livelihoods.

The garden also includes a shelter and a well with a dripping bucket. The garden features donkey ‘poo’ and donkey hoof prints – supporting the garden’s narrative that a donkey has gone out to work with the community it supports.

Mike Baker, CEO of The Donkey Sanctuary, says: “We are thrilled to unveil our Donkeys Matter garden at the RHS Chelsea Flower Show. Its central theme of water throws a spotlight on the hugely important work that donkeys do to help the world’s poorest and most vulnerable communities.

“Not only does the garden showcase The Donkey Sanctuary’s international work, but it’s also the perfect way to celebrate half a century of helping donkeys. It’s been made possible by the hard work and dedication of our staff, designers and contractors – not to mention the generosity of a long-term supporter – and I hope everyone enjoys exploring it.”

Garden designers Annie Prebensen and Christina Williams say: “We are thrilled that the design on paper has now come to life. While the build was complex and hard work, the garden looks as though it’s always been there and we are very pleased with all the enthusiastic comments we’ve had.”

Skooby, a 14-year-old skewbald gelding, and Harley, a 17-year-old black gelding, are owned by The Donkey Sanctuary, but are under the care of Mudchute Park and Farm on the Isle of Dogs as part of The Donkey Sanctuary’s Rehoming Scheme. Both are used to busy environments and meeting members of the public. They were accompanied to the show by Mark Kerr, Donkey Welfare Adviser, and Tom Davies, Guardian owner.

In places like Namibia, Lamu, Somaliland and Ethiopia, donkeys are used to collect water for entire communities. A donkey will often collect 40 – 60 litres of water at one time. The simple act of a donkey carrying water reduces the time required to access it, freeing children to get an education and women to be economically active.

The garden was designed by Annie Prebensen and Christina Williams and built by Frogheath Landscapes. The plants were grown by How Green Nursery.

The garden was made possible thanks to the generosity of a long-term supporter of the charity.