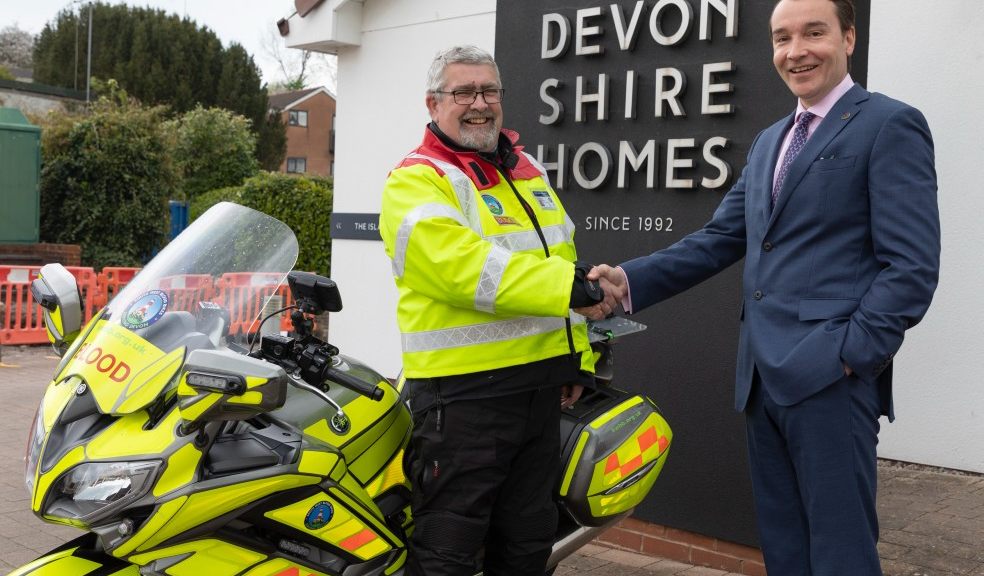 The housebuilder, which currently has new build homes sites in Crediton, Bovey Tracey, Bideford, Kingsbridge and St. Austell, has announced South West Blood Bikes and Cornwall Blood Bikes as its two Charities of the Year.

Both Blood Bike charities are formed from teams of volunteers who rely on donations alone to operate their life-saving service. Volunteer bikers use their advanced motorcycle skills to provide an ‘out of hours’ service to NHS partners, transporting essential urgent supplies such as whole blood, pathology samples, medication, medical equipment, medical notes and donor breast milk to NHS hospitals and hospices throughout Devon and Cornwall.

Devonshire Homes will donate £25 to South West Blood Bikes and £25 to Cornwall Blood Bikes for every open-market house sold during the year and Devonshire Homes’ staff will also show their support by hosting and taking part in a variety of fundraising events.

Mark Bentley, Chairman of South West Blood Bikes, visited Devonshire Homes’ head office in Tiverton to deliver an insightful talk on the service Blood Bike volunteers provide and how it makes a difference to the NHS and people receiving treatment.

Mark commented: “We are delighted that Devonshire Homes has chosen South West Blood Bikes as one of its Charities of the Year alongside our friends at Cornwall Blood Bikes. We don’t receive any government funding and do not charge the NHS for our services. We rely 100% on donations from the public and businesses so we’re always very grateful when a company such as Devonshire Homes chooses to fundraise for us.

“It is great to see a housebuilder committed to giving back to the communities in which it builds in, particularly at a time when the NHS is under more pressure than ever before. We look forward to a very successful partnership with the team at Devonshire Homes.”

Devonshire Homes has a history of supporting local charities. To date, it has raised just under £50,000 for local charities including Children’s Hospice South West and Hospiscare. The housebuilder also regularly supports bespoke causes including the Tiverton Rugby Club, Mid Devon Show and Tiverton in Bloom.

Angus Cook, Managing Director of Devonshire Homes, commented: “At Devonshire Homes, we support a number of local good causes, but in consultation with our staff, we choose a Charity of the Year as a focus for our fundraising activities. We are all aware that the NHS is under a tremendous amount of pressure which hasn’t been helped by the Covid-19 pandemic, so we felt it would be an ideal time to support a charity such as the Blood Bikes which tries to ease that burden.

“It was a pleasure to welcome Mark to our head office in Tiverton to talk to our team about the vital work the Blood Bikes do, providing a rapid response medical transport service to the NHS. It really brought to life how hard these volunteers work. Not only do many of them have full-time jobs, but they dedicate their evenings and weekends to being on call in case a local hospital needs urgent medical supplies. We’re delighted to be supporting both South West Blood Bikes and Cornwall Blood Bikes and look forward to a year of fundraising.”