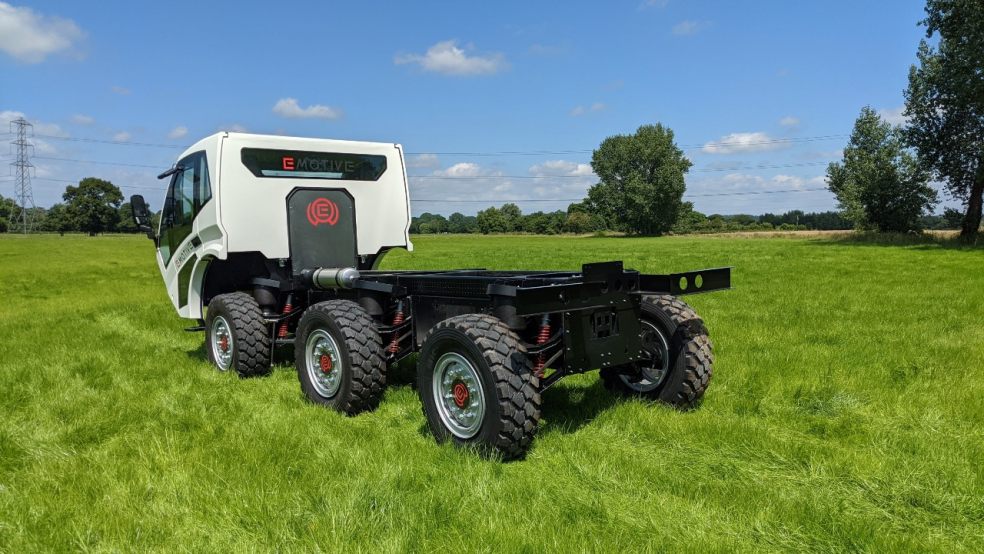 Devon-based EMotive, creator of the world’s first zero-emission all-terrain electric vehicle, is launching a £180,000 Crowdcube campaign to take its prototype and eco-alternative to the Mercedes Benz Unimog to the next stage of development, ready for demonstration and mass production under licence.

Ranging from fire rescue all-terrain vehicles (ATVs) to farm, forestry and adventure tourism trucks, EMotive aims to address the yawning gap that currently exists for this class of transport. Creating an affordable and accessible eco-solution for off-road industries, where medium weight utility, adventure, and off-highway vehicles have a global value worth over USD 5.48* billion, EMotive is tapping into a market that is due to expand at a compound annual growth rate (CAGR) of 21.2% (2020 to 2027).

While new cars and vans must comply with the UK Government’s zero emissions at the tailpipe targets by 2035, the next big focus will be light and medium weight commercial and off-road works vehicles, which is why EMotive has been designing and developing its disruptive electric platform for 6-12 tonne ATVs.

The Government’s long-awaited Transport Decarbonisation Plan, released on 14 July 2021, backs this view up, with proposals to end the sale of trucks powered by fossil fuels. Under the plan, 2035 has been set as the end date for the sale of new internal combustion engine (ICE) vehicles weighing from 3.5 to 26 tonnes.

By licencing its technology, EMotive plans to leverage the experience and globally established sales and servicing networks of existing manufacturers, allowing it to swiftly move from its prototype into manufacturing. The licensing model, which earns a royalty on each unit produced, has been successfully used by EMotive’s Founder Bruce Palmer with his previous business, Elemental Digest Systems.

Built around a bespoke commercial chassis architecture and advanced powertrain, EMotive uses a unique smart power delivery system to provide pure electric drive to individual wheels. The platform can be configured to two, four or six wheel-drive depending on the application, allowing its technology to be used in everything from utility vehicles to extreme terrain and military vehicles capable of operating in some of the globe’s harshest environments.

To date, EMotive has invested nearly £2m in developing and prototyping the physical vehicle form and the design of its smart powertrain. The next stage will be to complete and fine-tune the fully functional prototype ready to be demonstrated to commercial partners and produced under licence.

EMotive’s team draws on experience from Supacat, Flybe and Formula 1, and has been involved in the development of technology for Caterpillar, Lotus, Ministry of Defence and McLaren Automotive. It’s Founder, Bruce Palmer, has built and commercialised multi-million global business including Forthglade Pet Foods, and Elemental Digest Systems, which itself successfully raised £1.5m through Crowdcube.

Commenting on EMotive’s adventure and off-road E-ATV platform, Palmer says: “Our technology has been developed to enable businesses to adopt a cleaner way of working, where businesses can meet their CSR responsibilities and put effective plans in place to future-proof their all-terrain medium-sized off-road commercial and adventure vehicles, while reducing fuel costs by a fifth.

He continues: “The undeniable truth is that increasingly stringent regulations are on the horizon.  The world’s governments are focussing on decarbonising energy use to meet their climate targets, and that will force change. Given that vehicles in our target market are currently responsible for 20% of all transport emissions, it’s only a matter of time before legislation is introduced to clamp down on ATV and off-highway internal combustion engine (ICE) vehicles, and that’s where our opportunity lies. That’s why we’re creating technology that puts us ahead of the curve, capitalising on the growing need to make electric vehicles that are suitable for all terrains.

“Our vision is to lead a sector where eco-tourism will demand all-terrain e-vehicles that are capable of carrying multiple passengers, and where CSR will drive change in corporate entities such as airports. Now, everyday investors will have the opportunity to be part of this exciting journey through our Crowdcube fundraise, helping us to deliver leading-edge technology that will change the world for the better, at the same time as providing an E-ATV competitor for the ICE Unimog.”

Needing only a small slice of the global market to move rapidly into profit under its production licensing model, EMotive aims to leverage its head-start on the rest of the sector, and has already received expressions of licensing interest from manufacturers in both Iceland and the Middle East.

Commenting on the opportunities in the sector, Chris Smith, Professor of Mechanical Engineering at the University of Exeter, says: “With commercial vehicles, total cost of ownership calculations are paramount and often favour diesels over cleaner alternatives. Balancing vehicle mass, range, and the power requirements to accelerate a large electric vehicle from rest, calls for sophisticated packaging, control systems and power management. The answer isn't to make electrically powered versions of existing vehicles but to rethink the design concept and powertrain from scratch. Whoever does this successfully will have an enormous commercial advantage."

Crowdcube Investors in EMotive will receive shares and will be able to drive the vehicle on a Land Rover Experience course to see it being put through its paces. They’ll also have the chance to see the latest EMotive technical developments, which will be unveiled at its Research and Development facility in Cullompton, Devon.

EMotive’s vehicle is projected to cost less than twice the price of combustion engine alternatives,      which will be balanced out by cost savings of up to 40% returned on fuel, minimised vehicle maintenance, reduced servicing requirements, lower parts costs and reduced vehicle down-time, helping to deliver a quick return on investment. This EMotive believes, alongside adoption forced by government policy, will make its e-vehicle an attractive option for businesses currently using combustion-engined vehicles in off-highway environments.

Investors interested in the EMotive Crowdcube fundraise can find out more at: https://www.crowdcube.com/emotive