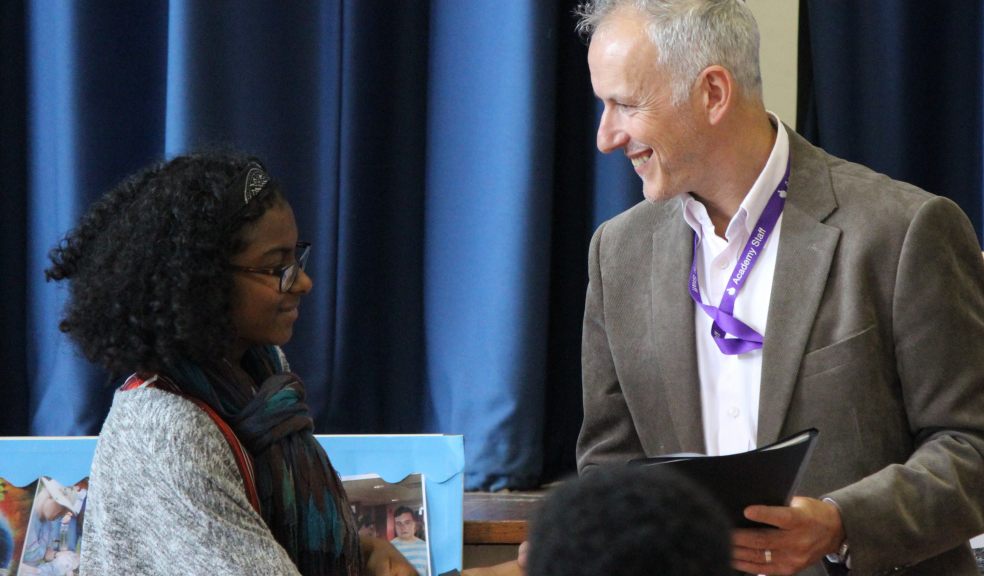 Following a monitoring visit from Ofsted inspectors on the 4 and 5 of July, staff at Exeter Deaf Academy have been given an end of term boost as the official report highlights a number of significant improvements in the education and care of Deaf young people at the Academy.

Her Majesty’s Inspectors have pointed to Executive Principal Arnet Donkin’s “no nonsense approach” and “high expectations” of himself and his staff as key factors in the progress made.

With much of last November’s inadequate Ofsted grading focusing on safeguarding concerns, Mr Donkin is particularly pleased that strong progress in keeping Academy students safe has been recognised, and is also proud to see the positivity and commitment of his staff team highlighted.

Arnet Donkin said,
“After years of meeting the needs of increasing numbers of Deaf young people with a range of additional needs, in steadily declining facilities, the Academy was becoming overwhelmed and things needed to change.”

He went on to say,
“It was good to face the rigour of an Ofsted monitoring visit in the knowledge that my team have been working extremely hard to turn the Academy around for our young people. Whilst we know we still have more work to do, It was reassuring to have it confirmed that our pupils and students are now considered to be safer and in a much improved learning environment. It was particularly heartening to hear the positive comments made by our parents, who have been incredibly supportive during this difficult time.”

The report highlights that ‘the progress pupils make has risen’, with ‘individual needs now being met more effectively’. Inspectors also comment on improvements in site security and safeguarding record keeping stating that ‘staff have a secure understanding of the need to protect pupils from all possible risks’. It goes on to refer to staff as ‘positive’, with ‘energy’ and ‘commitment’.

However, the report still feels the Academy can do more to challenge more able students and that ‘modern technologies to support pupils’ communication skills are less well developed’.

During July the Deaf Academy exchanged contracts on the sale of their current site on Topsham Road and submitted a planning application for the development of a new Academy in Exmouth, major milestones in the Academy’s 190 year history. However, Mr Donkin states that his primary focus remains on continuing to make the necessary improvements to deliver the very best education and care.

He went on to say; “It is fantastic to have bespoke and inspiring facilities to look forward to. Our young people and our staff truly deserve them. As the report makes clear, we have taken some very important first steps on our journey towards excellence. We will be uncompromising in making greater improvements over the coming months. I am confident that long before we arrive in Exmouth in September 2019 we will have been transformed into the centre of excellence that our new home is designed for.”