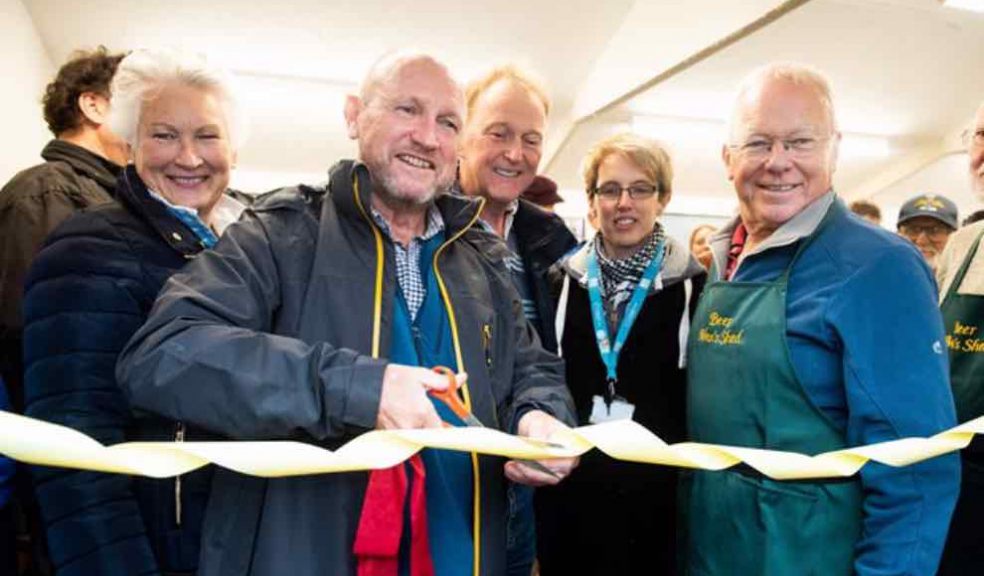 Smiles all round as Cllr Geoff Pook, East Devon District Council’s (EDDC) portfolio holder for Asset Management and Ward Member for Beer and Branscombe, cuts the ribbon at the Beer Men’s Shed which will help the mental health and isolation of men in the village and its surrounding area.

Beer Men’s Shed raised more than £10,000 as part of a crowdfunding campaign to build a workshop, which included a contribution from East Devon District Council of £4,500, £700 from Devon County Council’s Community Chest and £500 from Devon and Cornwall Police’s Community Resilience Fund. In addition to the crowdfunding campaign Clinton Devon Estates cleared the land for the shed to go on for free.Many of the tools, other items and help were donated or provided at cost by a variety of other local businesses, groups and individuals.

Beer Men’s Shed uses a workshop environment to get men together from the area to make things, which helps them socialise, improve their mental and physical health, and feel less isolated. The funding means that they have been able to build their own workshop in the centre of the village and buy good quality tools and equipment. Previously the project participants had to use their own tools and meet in garages and small sheds, which restricted the number of men able to take part.

Chris Pickles, Chair of Beer Men’s Shed, said: “We really appreciate the help that East Devon District Council has given us, not just from its own grant but also through its crowdfunding scheme which has meant that local people and organisations could join in as well. The result is that we received more donations that took us beyond our target, and we now have a Men’s Shed that is even better equipped than we had hoped.”

Money available from Crowdfund East Devon is in addition to a large amount of county-wide crowdfunding money available from Devon County Council and Devon and Cornwall Police, as part of the Crowdfund Devon partnership: https://welcome.crowdfunder.co.uk/crowdfund-devon

If you’re involved with a not for profit group and want to find out more about crowdfunding, East Devon District Council are running two more free Introduction to Crowdfunding sessions:

There is also a free workshop on marketing your crowdfunding project using social media on Thursday 7 November from 3.30pm to 6.30pm at Blackdown House, Honiton.

Places on each workshop are limited. If you’d like to book a place on any or all of the workshops please email crowdfund@eastdevon.gov.uk stating which you want to book onto, and how many people you’d be sending along (limited to a maximum of three places per organisation).